JK
by Joyce Kay 11 days ago in dog 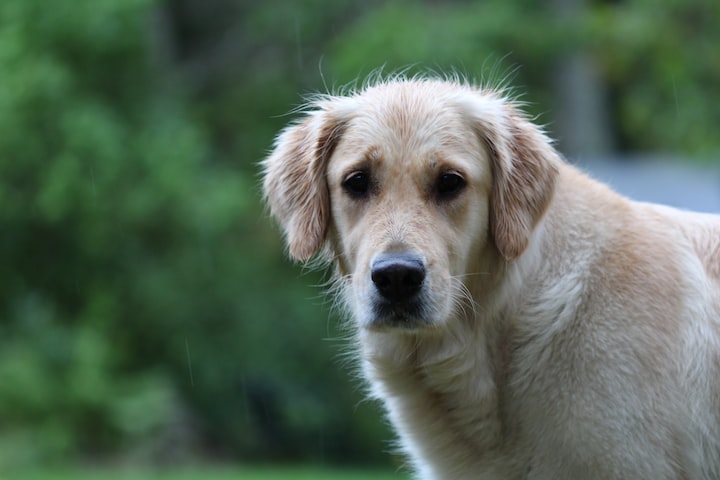 We adopted Spot from the shelter the day after my older brother left for college. Spot was about six months old when we got him. I don’t know how he got the name Spot. He looked nothing like a Spot to me. He was a golden retriever puppy, with big blue eyes. No spots anywhere. However, this was the name he responded to, so the shelter recommended that we keep his name, to help manage his anxiety.

The shelter told us Spot had been left at the side of the road, and had been found a month earlier. He had been scrawny and malnourished, and the shelter had spent a month nursing him back to health.

Spot was a little nervous to go with us. As Mom filled out the necessary paperwork, me and Dad tried to get him into the car. He was putting up an awful fight, whining, and barking. I guess the last time he was in a car was after he had been abandoned, so I could understand his apprehension. Finally we got him into the car. However, in order to convince him he wasn’t going to have to get out on the side of the road somewhere, he had to sit in the middle of the backseat, with Dad on one side and me on the other. Mom got in the passenger seat and looked at the driver’s seat to see it empty. Confused, she looked back at us. Dad gave her a shrug, and she climbed out, walked around the car, and got into the driver’s seat.

When we got to our house on Huckleberry Road, I took it upon myself to give Spot a tour. I showed him around the house, including his own special bed in my room, his food and water bowls positioned by the kitchen stove, and the basket of toys he had in the living room. I think he was still pretty nervous because he had an accident in the kitchen, right beside the back door. I pointed outside, where he is supposed to go to the bathroom.

Spot got the hang of our house pretty quickly. After the accident he had on the first day, he always let us know when he needed to go out by giving us one quick bark at the back door. He loved being in the backyard, so Dad made him a dog house. He often spent whole afternoons back there. We tried to bring him in the house, but if it was a nice day he would just lay by the backdoor and stare out into the backyard, through the screen door. When he was in the back yard, he would run around after his ball, which he would throw and then retrieve himself. Sometimes, he would take his bone into his house to chew without anyone looking. Mom would set a bowl of food and water on the back step for him, and he would help himself whenever he felt like it.

One evening, after a few months of having Spot, I went to bring him in and found that he wasn’t in the back yard. I called and called for him, and then I discover that he had dug a whole under the fence.

“MOM!!!” I screamed, “Mom! Spot got out of the yard.” Mom came running out the back door, as I was throwing open the gate. Together we both ran out into the front yard, to find Spot running towards us down the sidewalk.

After that, Spot started escaping from the yard more frequently. He would wander next door to say hello to the neighbours. He always came back, and since the neighbourhood had minimal traffic, my parents let him wander. They also got a little tracker for his collar that would send an alert to their phones with his location if he went further than a one mile radius from the house.

One day, on one of his neighbourhood visits, he got into Mrs. Bindle’s blueberry pie. She always sets her pies in her window sill to cool. He came running back with blueberry stained all over his face and his paws, leaving dark purple paw prints on the sidewalk from Mrs. Bindle’s house to our house. Mom quickly sprayed him off in the backyard, with the hose, then hurryed him into the house before Mrs. Bindle could figure out who the culprit was. Although, I thought it would be pretty easy for her to figure out. All she had to do was follow the paw prints!

Our neighbours all loved Spot. The twins next door bought a ball especially for Spot, that they would throw for him when he would wander over. Spot would go visit Mr. McMann every morning, and the two would sit on his front porch and read the newspaper. One time I even saw Mr. McMann reading the newspaper to Spot. Mrs. Bindle, who was not impressed by the destruction of her pie, even baked Spot his very own dog pie, from a recipe she got in a dog cookbook should bought.

On school days, me and Dad took Spot for walks around the neighbourhood before I went to school. We were always surprised how many of our neighbours on Huckleberry Road would wave and yell “Good morning Spot!”

One day I was working on math at the kitchen table. Spot was laying on the ground at my feet. I had my small black notebook open and was working on solving equations out of my textbook. I was writing my answer in my notebook, when my pencil lead broke. I sighed, and went to get my pencil sharpener from my backpack. When I walked back into the kitchen, Spot was standing on the my chair, with his two paws up on the table, my little black book in his mouth!

“No Spot, that’s my homework!” I yelled. He looked at me, kept the notebook in his mouth, and ran to the backdoor, which opened as Mom was coming in from the garden carrying a potted tomato plant.

Spot’s dog house was a mess! His bone was near the front door of the house. There was a chewed shoe laying near the bone. I didn’t recognize this shoe. It was too small to belong to anyone in my house. I looked around further, and saw a hat. I recognized the hat as belonging to Mrs. Bindle. Beside the hat was my little black notebook, which was covered in slobber. My old soccer jersey was under the notebook. Beside the jersey was a pile of crumpled bills, that I realized were combinations of five, ten, and twenty dollar bills! Next to these bills was my mom’s pearl necklace. I was glad to see none of the pearls had fallen off. There was an old sheet that Spot had probably pulled down off of someone’s laundry, I moved this sheet and was shocked to find even more bills under the sheet, along with a few purses and wallets! I could tell Spot had brought them there, because I could see his little teeth marks on them.

I ran and got Dad and Mom. Dad moved the house out of the way so that we could all take a look at Spot’s haul. Mom grabbed her necklace, and I grabbed my notebook and soccer jersey. Dad started collecting all the bills, wallets, and purses, and carried them into the kitchen to count how much money was there. I walked over to Mrs. Bindle’s house to return her hat. Mrs. Bindle just laughed when I handed her her hat and apologized for Spot’s antics. “That crazy dog! He must have taken it off my back porch when I was sun tanning!”

I went back to the house, to find Dad sitting at the kitchen table. “There is $20,000 dollars here,” he exclaimed. “It’s all in cash too, between the purses, wallets, and loose bills!”

“How are we going to figure out who this all belongs to?” I asked. “It looks like he has probably taken this stuff from all the different people in the neighbourhood!”

That evening, me, Dad, and Mom loaded up my old wagon with all of Spot’s stolen goods, and went door-to-door to each of our neighbours to see if any of them had been missing any goods or cash.

We found out the small shoe belonged to one of the twins from next door. $5,000 of the $20,000 belonged to their dad, who had withdrawn the money to buy a used car. He thought Spot must have taken it from his pocket, when he was working on his bike. Spot had been visiting and was “helping” him. He was glad the money was returned so he could buy the car.

$400 came from little Tommy’s paper route savings, which he was storing under a floor board in his bedroom. Apparently, Spot had been visiting Tommy almost every afternoon for months, without his parents permission.

$1,000 came from Mrs. Bindle’s knitting basket, where she stored her emergency cash. Spot had been keeping her company as she worked on a blanket for her grand-daughter.

One of the wallets belonged to Mr. McMann, and it contained $200 which he had withdrawn from the bank to give to his nephew, who had just been accepted to law school.

$7,000 was taken from Mrs. Trundle, who was storing the money the elementary school had raised from their fundraiser. This money was going towards buying computers for the library, but Mrs. Trundle needed to take it to the head office of the school to make the purchase. She had been storing the money in a plastic resealable bag on her kitchen counter. Spot had been visiting her too, and she noticed the money wasn’t there after one of his visits. She never even thought of Spot having taken it. She simply thought had misplaced it, and had been frantically searching all over her house for it.

One of the purses was my grandma’s which she had misplaced when she visited over the holidays several months before. In it were cards for me and my brother, each with $400!

$4,000 belonged to Mr. Barker. He had won the 50/50 at the local soccer tournament two weeks ago, and forgot the money in his car! Spot went for a ride with him, and must have snagged the money on the way out.

$1,000 was in a card to Mrs. and Mr. Clover. They were a newlywed couple, and the money was a wedding gift. They hadn’t realized the card was misplaced.

$300 belonged to Dad! He had always keeps some extra money under the sole, in one of his old shoes, for emergencies. Spot had pulled the sole out of the shoe and must have found the $300!

All of the neighbours were very relieved to have their money back, and many even laughed about the incident! We couldn’t figure out who the remaining money belonged to, so Dad and Mom decided to have a big barbecue the next evening at our house. They cooked hotdogs and hamburgers, and brought out chips, watermelon, and vegetables. All of our neighbours on Huckleberry Road were invited. Spot was in his glory as people were petting him, and laughed at the trouble he had caused.

Dad mentioned to some of our neighbours that after the recent events, he didn’t think we should be letting Spot out of the yard anymore. The neighbours protested. They love the visits from Spot!

Mrs. Bindle exclaimed, “Spot needs to keep coming to visit me! He keeps me on my toes!”

See all posts by Joyce Kay →