by Valerie Kittell 12 days ago in cat 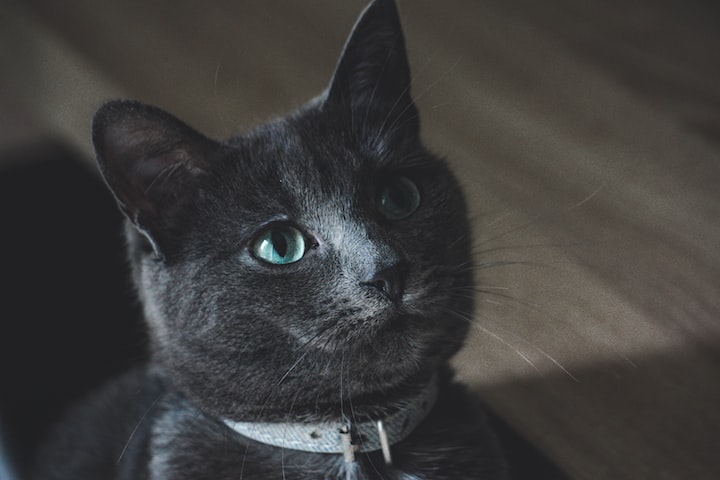 Photo by Bastien Hervé on Unsplash

A co-worker of my husband happened to have some kittens that were ready to be re-homed, so we went to take a look, after reminding ourselves that it was a many year commitment and we shouldn’t just jump at the first kitten to tap our face with a velvety paw. Ten minutes later, after being tapped by his velvety paw, we left with a a small gray kitten.

We were told that his mother was notably lacking in maternal instincts and that he and his litter mates had pretty much been raised by the family dog, a rat terrier, who took pity on them when the mother left on one of her many neighborhood escapades, only returning for desultory feeding sessions before she was off again. We thought that this canine foster mother episode may have been responsible for many of Ernie’s unique mannerisms, like barking instead of mewing, for instance. Or how he attached himself to his humans and followed us from room to room.

We took our time naming him, but he was giving off wise-guy, juvenile delinquent vibes from the day he entered the house. “He’s kind of an Eddie Haskell sort of cat, isn’t he?” I mused. This is because he had a sneaky look about him, like he was always scheming about how to skew things to his best advantage, but when he saw you looking at him, he immediately turned all “Look! I’m just a kitten being adorable — I have no idea who chewed your window blind tilt wand.”

Anyway, my husband said “Ernie” and the kitten looked at him and said “What?” At least it certainly sounded like that. So we all agreed that his name was Ernie.

I mentioned that he barks, but he also quacks and warbles. He does a Valley Girl up-speak thing too, ending every statement with a question. Mer-roo? is his all purpose “What’s up, guys?” intro said upon entering a room. Brr-rink! is what he says when landing in your lap.

Speaking of landing in your lap, Ernie is one of the great cat metaphysicists of his day, constantly testing the pound of feathers vs the pound of lead thesis; he has conclusively proven that 15 pounds of cat can be light as a cloud of down or can feel like someone has dropped a bowling ball on your thigh from three stories. We think somehow he has learned to control his density to conform with how disruptive he chooses to be.

There are several types of all gray cats, Ernie is the model referred to as a Russian Blue, which is the sleek, aerodynamic version of a slate feline, with an angular face, startling green eyes, and a silver tipping to the gray fur which is impossibly velvety. I once read a description of behavioral characteristics of a Russian Blue and Ernie certainly seems to fall in line with the archetype — very vocal, collects things, loves to knock objects off of tables, will play catch and retrieve. My husband taught him to high-five, which at first he loved doing but then later seemed to feel like it was beneath his cat dignity to respond to a human request on demand, so now he only does it very grudgingly and only because he senses how much it means to his human. When my husband says, “Ernie! High five!” and holds out his hand you can see the thought bubble over Ernie’s head “ Oh, no, not again. When is he going to tire of this?”

Ernie has two last names — one is Bobernie, taken from The Name Game song, which is frequently sung to him in the morning with the first can of food for the day. One of my most frightening irrational fears, right up there with dropping my car keys down a storm drain, is that someone will overhear me singing this to my cat and use a telescopic lens and record a video that will then go viral. His other last name is Kilsmousky, in honor of his Russian heritage and the fact that he once killed two mice on successive days (sweet little field mice with round ears who looked exactly like his catnip mouse) each of which he laid out with great ceremony on the carpet right at the foot of the stairs so that his mouse wake could not be missed. Word evidently went around in the mouse community because we have never seen another one.

Ernie is eleven now and even his vet commented that he looks and acts like a much younger cat - he has the feline version of Dick Clark syndrome. He likes to keep himself engaged in new activities and has lately devoted much time and energy to the study of doors and door knobs. He is expert at closures, but less skilled at opening.

Ernie is a great believer in routines and dislikes it intensely when patterns are disrupted. He thinks that both bedtimes and morning rise times are cast in concrete, much in the manner of a cat drill sergeant who signals for Lights Out and Reveille. Right at about eleven at night, he gets all twitchy, waiting for the signal from me, “Going to bed, Ernie?” which is met with ecstasy as he prizes nothing more than his role of ceremonial cat escort to the bedchamber. He sleeps at the foot of the bed, usually through the night, although occasionally he has to notify us around 2 or 3 am that fiends from another dimension are lurking but he’s on the job and don’t worry and hey, he didn’t wake us, did he? The dawn’s first light is his signal to begin lunging and jumping at the human foothills under the covers, and I selflessly get up to join Ernie in the kitchen where he listens to his song, enjoys a breakfast from his list of approved entrees and I have my coffee.

I live in a small seaside New England village and am trying to become the writer I always wanted to be. I focus on writing short stories and personal essays.

See all posts by Valerie Kittell →

Something Complicated
2 months ago