I Survived a Caiman Attack (And So Can You!) 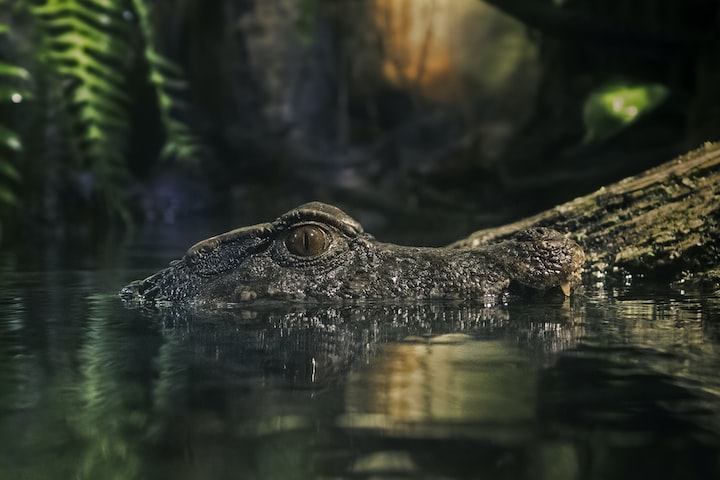 Photo by Robert Zunikoff on Unsplash

The alarm blared in my quiet room. I bounced out of bed at 5:30 am, wide awake. It was my first day recording the sounds of the swamplands.

I tip-toed out of the dorm, packed with sleeping scientists, and bounded towards the jungle. Yesterday, the Pantanal revealed a corner of paradise nestled in dense foliage. Today, the Miranda River was ready for her recital.

The Brazilian sun rose over the horizon. Light sleepily crept across the Pantanal; the tropics awoke in a collective yawn. Gradually, all of the jungle's creatures joined in chorus, and I stood in awe, encircled in a tropical concert’s crescendo. From the canopy rang tweets, songs, and chitters. The haunting bays of howler monkeys echoed in the distance. Before me, water gently lapped at the river’s shore. All around, buzzed swarms of mosquitoes and rushed a cool, refreshing breeze.

The recording ended - my first successful audio clip! I packed my makeshift lab away in a shabby satchel and hesitated a moment, wishing to spend just a moment longer.

My gaze shifted to the water in hopes of seeing a capybara family. A quick scan of the water yielded only the serenity of a sleepy morning. A passing shrub swept up by the swift currents lazily floated by. I kept scanning, intent on finding the source of this new noise.

And then, I saw it. Across the bank floated a caiman, his head just barely poking out of the water.

I was warned of the dangers of caiman by my professors, but curiosity kept me cemented to my spot. I fumbled through my bag and whipped out my phone with the excitement of a teenager seeing their first celebrity and snapped a photo of this rare up-close sighting.

From 20 feet away, this caiman looked small and perhaps even cute. I figured he was a youngster, so I nonchalantly put my phone in my pocket and watched him lazily float by.

But then, he spotted me. His calm demeanor shifted, and the sounds of the canopy stilled. He arched his back above the water, revealing his full mass. My morning buddy was, in fact, a hostile reptile as long as my arm span.

If I knew a thing or two about crocodilians, I would have realized the danger I was in now. This behavior is, apparently, a caiman’s way of saying:

“You are in my territory. I do not like you. I am large. Prepare for battle”.

But alas, I did not speak croc. I was in Brazil for birdsong!

I went rigid at this sight, frozen as one Dr. Alan Grant facing a T-rex. Fear transformed into a Rolodex of survival facts,

“Predators chase you when you run, right? Is that just mammals?”

“Punch the nose? Is that just for sharks? He is in the water, after all.”

My vision went dark, and my reason went silent.

I turned on a dime. Time slowed as the battering of water approached from behind.

My legs began to run scurry underneath me.

Suddenly, I was scraping through leaves, ducking under branches, hopping over rocks in my path. My heart pounded in my head: each thump a vignette of red around my vision.

I turned a corner and glimpsed my research building beyond a small pasture. The nearby riverbank underbrush shifted and let out a rustle.

I choked in a gasp of air and raced across the remaining length. After what felt like an eternity, my foot fell on a staircase step. I raced up to the safety of a stilted cabin.

The door slammed open, much to the surprise of a groggy gathering of scientists sleepily sipping their morning brew. For a silent moment, they gaped at me, my eyes wide with adrenaline and my face red from exertion.

I slumped into the nearest seat and met the inquisitive stares,

“Bruh, you would not believe the morning I've had.”

Upon catching my breath, I spent the rest of the day obsessively researching what I should have done. After all, I had to record in the same spot for the remainder of my visit. From that day on, I became croc-aware. Don't be like me. Learn the info before you need it.

If you too find yourself in crocodilian territory, this guide is for you:

If you're in their territory, stay as far away as you can from every water source, even marshes, ponds, and small streams. They're most active between dusk and dawn, so be extra careful after dark. If you pass by the shore, stay as far away from the shoreline as you can.

Apes together strong - and intimidating! Bonus points if your friends are taller than you. The more formidable you all look, the better. Once you're with a group, don't stray. Crocs prefer to attack the one that’s always wandering off. It's easier prey for them!

3. If a croc arches its back to you, RUN

This behavior is done in preparation of a launch. The same goes for a croc raising it's tail out of the water. Both of these actions are aggressive behaviors. You don't want to be around for what comes next. The giant reptile is asking you to leave; respect the giant reptile.

4. Carry a large stick or some sort of weapon with you.

I can’t confirm this would help scare them off, but it made me feel safer after the incident. I never saw that croc again in the same spot after I started bringing a big club around.

Don’t stand and snap photos at the approaching predator. Back away slowly while facing it.

Once you see a croc, keep eye-contact with her. Doing this might scare her off. They prefer ambushing prey over fighting. If you make it apparent you see her, she might decide to search for easier prey.

7. If a croc moves towards you, run in a straight line inland away from it as fast as you can.

Most tire quickly and only run at ten mph on land; you can outrun your average croc. Plus, they're not the type of predators to chase. They prefer ambush. More often, they'll give up once they reach the shore and stay near the bank. Don't run in zig-zags. Most croc species are smart enough not to be confused by that.

Seriously, don’t swim in an area that you aren’t 100% sure is safe. Crocs are better swimmers than you, and they can hold their breath longer.

If you find yourself in the mouth of croc, fight like your life depends on it (it does). Poke their eyes, punch their throat, jab their nose and ears. Do everything you can to get them to release you. As soon as you're out of their mouth, Get. Out. Of. Dodge. Now isn't the time to practice croc wrestling.

Though I wouldn't recommend going toe-to-toe with an adult, crocodilians are remarkable and, yes, even loveable. My harrowing experience only solidified how truly worthy of awe they are! There's no need to be fearful if you take proper precautions.

Respect wild predators and their space, even if they look like cute little dudes. Only approach, handle, or observe them closely when you're with a knowledgeable expert. But, if that opportunity arises, I could not recommend it enough. As long as you understand and listen to nature's cues, or are with someone who can translate them, sate that curiosity.

But satisfaction brought it back"

More stories from Olivia L. Dobbs and writers in Petlife and other communities.