by Karen Kamenetsky 2 months ago in dog
Report Story 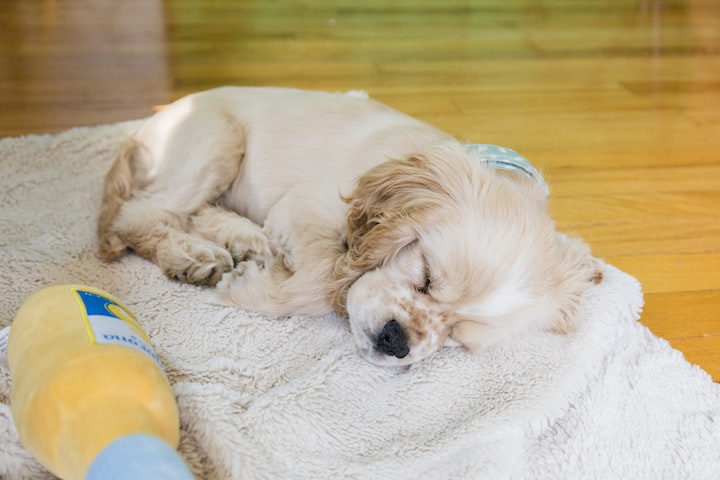 I’ve seen the videos of dogs who communicate with their people by pushing buttons representing letters or words, and I can relate. I once had a canine companion who was a champion communicator. He never learned to push buttons. At the time, I didn’t know that was a thing. He was a pup who lived by the mantra that actions speak louder than words. I didn’t have a name for his communication style at the time, but I recently read a study in National Geographic that describes it to a T. It’s called referential signaling, a type of gesturing meant to convey a message without using words. Mac was a master at it. I wish I had known about the buttons, though. There were some things that he needed to tell me that would have been easier with words.

Mac was a purebred Cocker Spaniel. The kids wanted a dog, and our neighbor had a litter of pups for sale, so the whole family walked up the hill to her house to pick one out. The puppies were tiny and squirmy and so adorable we could barely stand it. Mac was the prettiest fawn color and he had beautiful big brown eyes. He wiggled his entire body in delight when we petted him. It was love at first sight for all of us.

We had to wait until he was old enough to leave his mother before we took him home. The kids were over the moon. They were just old enough to help take care of a puppy. They filled his water bowl and brushed his soft coat. Mostly they played with him and cuddled him. My son would race Mac across the yard. My daughter would lie on the floor and let him fall asleep on her stomach.

We blocked off the kitchen so Mac could hang out there while we trained him to do his doggie business outside in the yard. He would run around my feet as I cooked or washed dishes, then dash off to slide across the floor and smash into the glass panes of the sliding doors with a soft thud. His flair for communication was evident right from the start. He would nudge me with his small wet nose when he wanted attention, sit by the door and issue repeated high pitched puppy yelps when he wanted to go outside, and push his bowl around the kitchen floor when he thought it was about time I gave him something to eat.

He grew by leaps and bounds and soon he was old enough for obedience school. I signed him up and we went to class together. Neither one of us was very good at it. Mac responded to commands as though they were more like suggestions, and I am terrible at discipline. We flunked out and I ended up with a dog who had free run of the house, spent his days following me around like a shadow, his evenings snuggled between the kids on the couch, and his nights sprawled between me and my husband in our bed.

Mac’s sweet disposition made up for a lot; like bed hogging for one thing, and his tendency to pee when he was excited, including on the feet of unsuspecting guests as they came through the door. He never did learn to respond to commands, including “heel”. It was lucky, I guess, that he only weighed thirty pounds or so, because he thought being hooked to the leash meant he should drag whoever was attached to the other end behind him like a sack of potatoes as he barreled down the sidewalk. He was a jumper too. He could leap higher than it seemed possible for his little Cocker Spaniel legs to take him; like onto the kitchen table, and, using a chair as a springboard, right up onto the counter, especially if there was something tasty sitting there.

Mac adored the kids, and the feeling was mutual. My daughter was very attached to him. I was his constant companion until she got home from school, then they were inseparable. I don’t know how he kept track of the time, but he was waiting by the door each day when the bus pulled up. Her arrival was accompanied by enthusiastic leaping and yelping. She would hug him and profess her love. He would lick her face and wiggle his entire body in delight at her return. He sat on her feet while she did her homework and slept with his head on her lap while she watched television.

As he grew, Mac perfected his communication skills. He would swat any reachable human with his paw when he wanted to be petted. If sitting by the door went unnoticed as a signal that he needed a walk, he would drag his leash over and drop it at my feet. He had a very expressive face too. I swear he smiled sometimes, and he had a sulky face he like to put on when I chased him off the couch in peak shedding season.

When my daughter was ten, she went off to sleep-away summer camp for four weeks and Mac took referential signaling to new heights. In hindsight, I guess the poor pup had no way to know where she had gone. She had been away for a day or two before, on an overnight at a friend’s house or a visit to grandma and grandpa, so Mac let the first few days slide. By the fourth day, though, he was clearly distressed. He would sit by the door at the time her bus usually arrived. When she didn’t show, he would give me a quizzical look, then snuggle up alone in their usual spot on the couch.

I think it was about day five when I went up to change the sheets on my bed, just after the school bus usually arrived, and found a little puddle of dog pee on the carpet right outside the door to my room. I cleaned up the mess without giving it much thought; Mac didn’t usually pee in the house and an occasional accident wasn’t that big a deal. The next day, though; same time, same place, same puddle of pee. This time, I hauled Mac up the stairs, pushed his snout into the puddle as I had been taught in obedience school, and told him “NO”.

He gave me a scornful look before heading downstairs to take up his vigil on the couch.

I still hadn’t registered a pattern, or suspected real trouble. But when, on the third day, I happened to cross paths with my sweet pup as he came down the stairs, he gave me a look I can only describe as distain. I shouted several expletives, ran up the stairs, and, yes, found a puddle outside the door to my room. I thought about another snout-in-the-pee reprimand but realized that wasn’t going to help. This dog, I told my husband, thinks I murdered our daughter and buried her in the back yard.

Fool me once, fool me twice, maybe you can fool me three times, but I was not about to clean up a puddle of pee every day for the rest of the four weeks before my pup’s favorite person returned from camp. I put a doggy gate across the bottom of the stairs. I sat down next to Mac on the couch, scratched his favorite spot, behind his ears, and explained the camp situation in detail. He turned his head away and pretended not to hear me.

I lavished Mac with extra attention, love, and treats, but he remained aloof. He sat by the front door every afternoon at three and gave me the evil eye when he left his post for the day after his girl had not arrived. He snuggled up to my son in the evenings and began sleeping in my daughter’s empty bed. He brought the leash to my husband when he needed to go out and began a hunger strike of sorts, refusing to prompt me when I was late with his dinner. I’d rather starve, he signaled, than ask a murderer for my dinner.

On the day my daughter returned from camp, Mac nearly exploded with joy. He leapt up almost high enough to kiss her face and yelped a happy greeting. He ran circles around her. He peed on the floor, but not out of spite. That night, he returned to sleeping in my bed, which I took, not as an apology, but as notification that I had been absolved of suspected kidnap and murder. I patted his head before I fell asleep that night. We are going to have quite a time, I thought, when she goes off to college.

More stories from Karen Kamenetsky and writers in Petlife and other communities.