by Mike Marsden-Hill 10 months ago in adoption

I first set eyes on Cody in a cage in a pet rescue shelter, in a town 10kms from my home.

I was looking for a dog to be a guard dog and pet.

There were other dogs in other cages better fit for the role in hand, but our eyes met and I felt a need, as I know he did.

"His name is Johnny Flea and he's got issues," she said almost apologetically. "He's been mistreated and we've had him for a year. People find him difficult to control. He's defensive and reactive but he will keep you amused."

"I'll take him!" I said. "Well take him on trial for two weeks and see how you get on," she parried.

"He doesn't do cars," she said. Johnny Flea loved it, and sat in the front passenger seat all the way home as if co-piloting and navigating at one at the same time.

Our journey together had begun!

My wife had been a party to the decision to have a dog, but I had quickly acted on our decision, and introduced 'Cody' as he alighted from the car onto his first landing at his 'forever home.'

Cody lived up to his hype. At first, he was both unpredictable and aggressive, charming, and entertaining. Yet there was something there, I could sense it and see it.

He was extremely territorial about his food, me being the butt of several of the aggressive bearing of teeth and feigned charges, whilst he protected the food I had just given him, from my imaginary theft of the same. To this day he still actions a diluted equivalent, which although somewhat suppressed will remain part of his instinct for all of his days.

It was time to go back to the shelter, and formalize Cody's adoption. When I did just that Linke, the lady there, was both shocked and gleeful that Johnny Flea had found his forever home.

And I was happy to have my enigma, Cody!

Cody is a medium-sized dog, Africanis by breed, and exhibits many of the behaviours attributed to the breed.

He is fearless, fiercely loyal, and obedient, except relating to his food issues, then caution has to be applied. Dutiful, yet humorous, comical and both expressive, and vocal. Beneath his instinctive self-preservation, accentuated by ill-treatment, Cody is a calm loving individual, who craves the structure of the pack: me, my wife, Angel our small terrier type, and Cody. He is enraptured by his relationship with Angel who is thirteen years his senior and takes great delight in teasing her, but crumbles at the first sign of assertive resistance, matriarch she is!

He is a good looking dog, who responds well to inclusion, and becomes petulant when he thinks he's not getting his quota. He loves his walks, drives, and unabated access to the whole house, and prescribed furniture. This is his forever home and he guards it as if his life depended on it.

It is fair to say that Cody has carved a niche in my heart, and we have bonded in such a way that only kindred spirits do. Another place, another time, roles could have been reversed.

He is my link to the knowledge that we must tread with care in a world full of creatures worthy of respect and due deference.

It is why I am never happier than when I unleash Cody, and let him fly like the wind on the shores of the local lagoon.

For him to be able to run like a greyhound after twelve months in a cage, albeit a shelter cage, makes my heart soar. I imagine myself, him and the feeling of freedom it must give him and an opportunity to flex his muscles and show the world his speed and agility. An athlete of note, and never more than a whistle away, no matter how many meters distant. 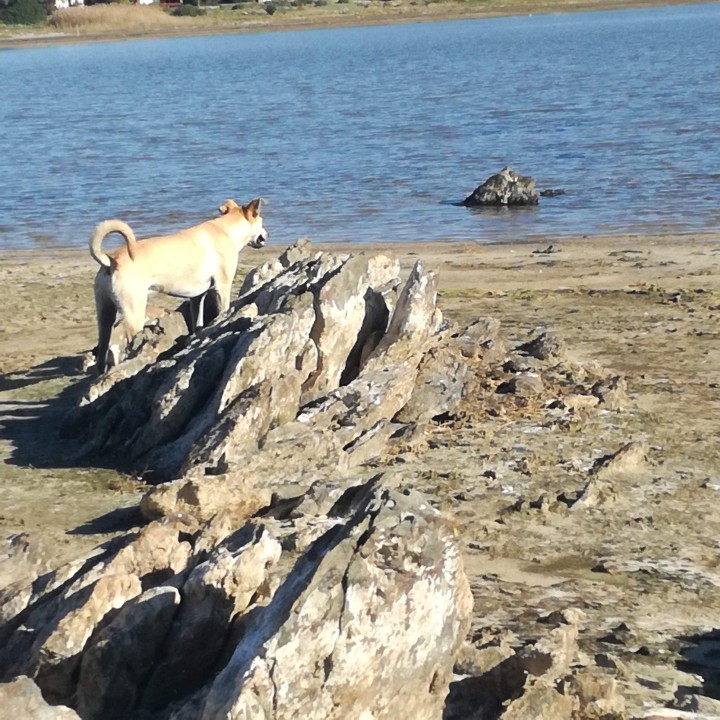 We have had Cody for almost two years now and he's had many adventures, including leaving his mark on a number of would be 'dog whisperers,' who he felt had become too familiar or trespassed in his mind. It has on occasion caused us embarrassment, and in the case of three Daschunds, vet repair bills.

But for me, these are just growing pains, and Cody and I bond more each day, and it is hard to picture life without him, his companionship, his adoration, his shadow like tailing of me, and the sheer camaraderie we share, as we plumb the depths of that something we know is there and links us!