A young lynx, attacked by wolves and separated from the mother lynx, broke into the house and asked for help

by Rachel Caspari 2 months ago in wild animals
Report Story

The lynx that looks like a cat, have you seen it? 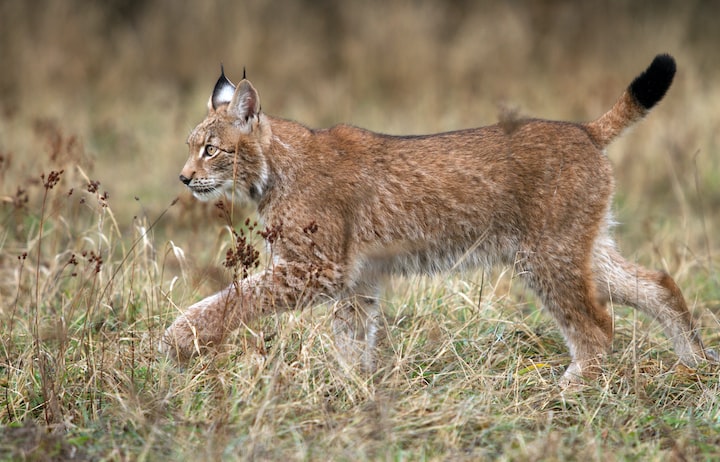 A young lynx, attacked by wolves and separated from its mother, breaks into a house and asks for help

In the forest without tigers and leopards, the lynx is a small version of the "king", standing at the top of the food chain. Mainly prey on rabbits, and rodents can also prey on roe deer, deer, and other large animals, even brown bears will pick up the lynx's leftover prey.

However, the lynx and wolves are "world enemies", always hurting each other, the lynx will hunt and kill wolf cubs, and wolves will deal with the lynx, the two can not always coexist peacefully.

The other day, a small lynx, attacked by wolves, separated from its mother, wandering alone in the forest, unable to catch food, with survival instincts down the mountain, to a house inhabited, and jumped into the house from the window, asking for help.

In primitive forests, lynx often in the depths of the dense forest activities, rarely leave the forest, and climb into the trees to hide in case of danger.

The lynx has a very distinctive look, unlike other felines, all have large long tails, but a short tail and the end of the tail is still black. Two clusters of black hair on the ears and long hair on the chin, like a goatee.

The lynx gave birth to 2 cubs in one litter, the young lynx was just born, very fragile, and in the mother's careful care slowly grew up. 2 small lynx began to eat meat after a month old, led by the mother lynx, to the outside of the cave, while playing, and learning survival skills.

One of the young lynx, growing particularly spirited, more lively, often with their companions to lunge at each other, but also to hit each other with their heads, hitting and rolling down the slope.

Female lynx also do not care, is it for them to learn the skills of attack and defense by themselves? The lynx educate their cubs and let them "practice" with their companions first, and then receive training on hunting skills.

02 Attacked by wolves, young lynx get separated from their mother

Once, the mother lynx took 2 young lynx to walk in the forest, looking for prey. However, the prey was not found, but they were attacked by wolves and it was too late to escape. The wolves were attacking from two directions, howling and demonstrating, and they might pounce and tear the lynx at any time.

The mother lynx, to protect her cubs, ran quickly towards the other side to attract the attention of the wolves by herself. And 2 small lynx panic, each fleeing for their lives, in the twinkling of an eye, who can not care who.

The little lynx immediately climbed into the tree to hide. The wolves all went after the mother lynx, but one wolf found the little lynx and ran to the tree, circled the trunk several times, tilted its head, and showed its sharp teeth to scare the little lynx.

The little lynx was scared and clung to the trunk of the tree. After a while, the wolf left without any help. The little lynx didn't dare to come down from the tree and made sure the wolf didn't return before he came down and ran to his mother. He ran in the forest until he was exhausted, but he didn't find his mother. It got separated from its mother.

It is reasonable to say that among lynxes, they can trace their companions by scent. The smell of lynx urine is persistent, under normal circumstances in the same area, wanting to find a companion is a very simple matter.

03 Unsuccessful in chasing the hare, hungry and heading down the mountain

Usually, the lynx grows to 2 years old, can live independently, and the little lynx is less than 1 year old, did not learn to hunt little lynx, cannot survive, had to wander alone in the forest, and became a poor "orphan".

Tired and hungry little lynx, want to go hunting to fill their stomachs, walking in the woods, walking, so easy to see a hare, rushed to run over, jumped up a pounce, pounced on an empty.

Perhaps the little lynx was not fierce enough to pose a threat, and the hare did not seem to be afraid, running to the side and stopping to look at the little lynx.

The lynx stared viciously at the hare and again rushed over to want the hare, but the hare calmly escape. Physical incompetence, do not know hunting skills, even if the lynx has grown sharp teeth and claws, but also not useful.

In the end, the little lynx failed to catch the hare and rested on the ground for a long time before getting up and continuing to walk. Fortunately, no wolves were encountered, otherwise, their lives would not have been saved.

The little lynx, who did not know the direction, walked towards the bottom of the hill and went to look for food in the instinct of survival.

04 jumped out of the window and entered the house, and came up to rub it intimately when he saw people coming.

By mistake, the little lynx walked to the nature reserve garrison barracks, the face of the unfamiliar environment is not afraid, but with the last ounce of strength from the window jumped in, breaking into the house for help.

Weak little lynx even to human help, or how to say that animals are spiritual it.

I don't know how long the little lynx had been hungry and how far it had walked to the protected area barracks. When the ranger saw it, it was slightly trembling, depressed and unsteady in walking, but there was no trauma.

Rangers, the little lynx is female, about 80 cm long, weighing less than 20 kg, thin and frail, a look is a minor, but the paws are furry, looks quite fat.

When the little lynx saw people, it did not hide but stumbled over and intimately rubbed its body against the trouser feet of the visitors, which was pitiful and heartbreaking!

Rangers immediately to the little lynx fed food, hungry little lynx, gobbling, not a moment to solve the food, but also licked the mouth, it does not look so bad.

05 small lynx eaten and do not leave, straight to the human side

Because the lynx is not traumatized, rangers feed it after eating, open the door, and want to let it free to come and go, back to nature. However, the lynx does not seem to want to leave, to the people around.

Rangers observe the state of the little lynx, it is separated from its mother, has no wilderness survival ability, and the body is still weak, and can not run, let alone hunt for food, so it will be sent to the animal rescue station, for treatment.

The little lynx is smart enough to stay here with food and drink and someone to manage it, better than wandering around on its own. The main reason is that it does not have the strength to run around.

The little lynx was treated with antipyretic and anti-inflammatory drugs, fed glucose water and beef, and gradually improved its mental state and behaved well and docilely. When it recovers physically, it will be released back into the wild.

Life is just a series of trying to make up your mind.

More stories from Rachel Caspari and writers in Petlife and other communities.