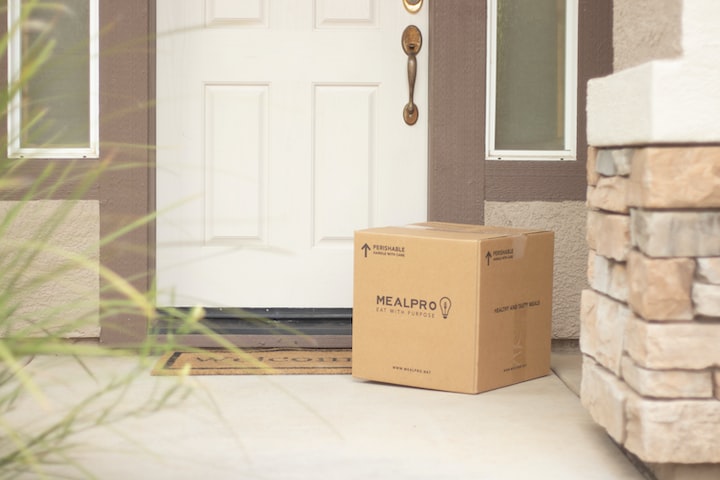 Photo by MealPro on Unsplash

Miles was awoken by the angry sounds of a large truck barreling down the street in front of his house. He rolled over, wishing they had the decency to be quiet. He had a late night. Connor, his roommate was up late, TV blaring, clacking on the computer, music blasting. He loved Connor, but the late nights were a regular thing with him. He was still in college. Miles felt like Connor had always been in college and he wasn’t sure it made for a healthy lifestyle. He was worried.

Suddenly Miles became painfully aware that the truck had stopped just in front of his house. A man casually exited the truck with a box tucked under his arm, headed toward Miles’s front door, then unceremoniously plopped it on his stoop. All the while the man was whistling. Miles hated whistling.

Now he was up for sure. Miles bolted to the door and glared at the man through the window as he retreated. He could clearly see the package that had been placed on the rug. Curiously, Miles wondered what was in the box. He struggled with anxiety, the Dr. had said. Conner was concerned about it, but being the good friend he was, he tried to understand. However, understanding Connor may be, Miles knew better than to mess with the package that had been delivered for Connor. He made that mistake once. His anxiety had gotten the best of him, and he had ripped into one of his packages. Let’s just say, that argument was one neither would quickly forget.

“Well perfect”, Miles thought. “I’m just going to have to try to survive today, knowing that stupid brown paper parcel is taunting me from just outside the front door.” Miles thought about trying to return to his nap, but decided he was way too wired. “Might as well get in some exercise.” Miles headed outback.

He had set up a running track in the backyard where he could make laps. Living in a subdivision sometimes meant the yards were quite small. Miles was extremely fortunate though. His house was a corner lot with a little extra. It suited his needs well. He ran a few laps before he heard his friend holler from the other side of the privacy fence behind him.

Freddy was not English but had always come across very Sherlock Holmes. Miles knew there was something a bit off about the dude, but he was a solid neighbor, so Miles let it slide. He did think maybe he should watch something besides the BBC. It probably wasn’t helping his delusion.

“How’s it going man! Good to see you! I just figured I would get a few laps in.”

“Splendid idea! I have always quite admired your aptitude for fitness. I, myself, am out here to give Brooke a little space. We had a less than cordial evening.”

“Oh, I’m sorry to hear that man. You and your lady fightin’?”

“I suppose one could say that. I simply do not understand why she is upset with me. Last night was simply dreadful. Kitty, you know who I mean, the blasted neighbor to my right, was up all hours of the night carrying on!”

Oh boy, did he know Kitty. She had moved into the neighborhood last fall. She creeped him out. Miles didn't even like to talk about her, because he was certain she could overhear everything. She was always glaring with those dark eyes. Kitty was not friendly at all, and in fact, to this day had still not introduced herself to him. The very sight of her made his anxiety rise. was selfishly glad she hadn’t moved in next door to him.

“Oh wow, man. I’m so sorry. She only ever seems to carry on at night, isn’t that right?”

“Exactly!” Freddy exclaimed. “What I cannot understand is how Brooke cannot hear it. She was so angry with me for trying to quiet Kitty that she threatened to lock me out! Can you imagine! I could not rest. Did you hear Kitty last night? Surely you must have. She was carrying on like that for hours!”

Miles had vaguely heard the ruckus last night. It had woken him up a few times. He was consoling his friend when a squirrel perched himself on the very corner of his privacy fence. Both Miles and Freddy immediately began to charge the squirrel, vocalizing their desire for the creature to leave immediately.

“It’s that same squirrel again Freddy! My bird feeders are nearly empty! I don’t know what to do anymore. Rodents!”

“I agree with you, my good man! Something must be done. Do you know that I caught a raccoon in my trash the other day? The wildlife in this subdivision is getting bothersome.”

The two friends chatted a bit more until Brooke had called for Freddy out the back door. Freddy made a joke about her wanting to make up, then headed back inside to try to repair the relationship with his partner. Miles finished his run, eyes on the fence in case the offending squirrel attempted to return. Sneaky, quiet little critters squirrels were.

Back inside, Miles ate his lunch. It was well past lunchtime, but his anxiety had been so high all day that he hadn’t felt like eating. The exercise remedied that. He devoured his lunch and gulped down a large portion of water. Thankfully, it wasn’t terribly hot out today. It appeared that it might just rain later. Miles was not a fan of bad weather. He guessed the anxiety kept him from being able to appreciate it. For some reason, Connor loved it. He liked the guy, but certain things he simply did not understand.

His thoughts started to gravitate back to the package that was mocking him from the other side of the door. Miles could not wait for Connor to come home and open that stupid package. He decided to distract himself with a little TV. Law and Order was on, one of his very favorite shows. He couldn’t figure out why, but it seemed to help calm his anxiety.

Miles watched a few episodes, then heard the delightful jangle of keys in the door. Connor was back! Miles bolted from the couch and stood directly in front of the door. Connor came through, brown parcel tucked under his arm. He bent down and reached out to pet Miles, running his hands through his thick, curly fur.

Miles barked and jumped and licked at Connor’s face in a way that seemed to say his entire life was made right by Connor’s return. Connor laughed and pushed his way past the fluffy dog. His arms were full. He made his way to the table to dump everything, while the excited dog hopped around behind him, yelping with delight.

“Oh! Look what we have here Miles!” he said as he held out the offending package the man had left. “Let’s see what is inside shall we?”

Miles’s breath caught in his throat as Connor bravely, almost excitedly, ripped off the paper. “It’s my manuscript!! I cannot believe it! Back from the printer already! Oh, this is so exciting!”

So, it was a good package, thought Miles. That is a relief. His anxiety seemed to calm just a little bit. If Connor is this happy, the package had to have brought good news. More importantly though, Connor was home. Everything was ok now. Miles sat in front of him, tail wagging, panting with excitement, joy in his eyes.

“Come on boy. I’ve got a treat for you tonight! I’m going to read you a little story. Would you like a little story?” Connor walked to the food cabinet, grabbed a scoop of delicious stuff, and dumped it in Miles’s bowl. Miles inhaled it quickly, then followed Connor to the living room where they curled up together. Connor began to read from the manuscript with a strong, soothing voice. Miles closed his eyes, sighed deeply with contentment, and fell asleep.