A Bad Human and A Good Human In the City

A story of a pigeon raised by a single dad 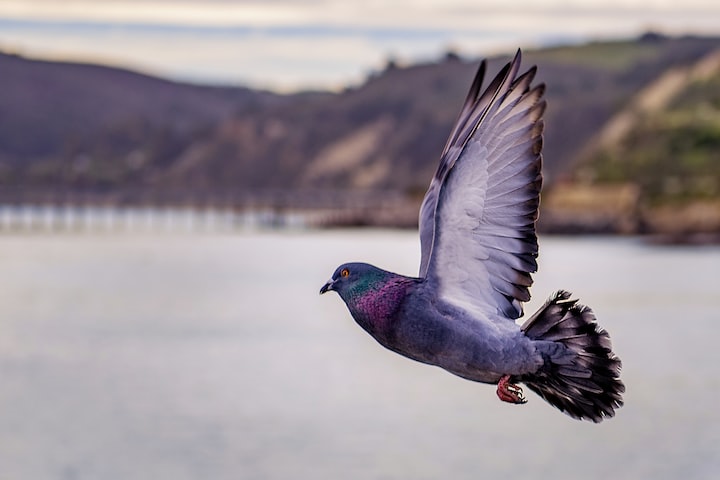 I am Klu. A 6-month-old male pigeon. I have no siblings, and a single father raises me. I do not remember how my mum was, but my dad took care of me. He is the best dad in the world. Today I tell our story to you.

When I was small, every evening, he brought food for me in our nest. But when I grew older, he brought me food two times a day.

My dad taught me how to fly when I was four weeks old. We flew together over the various parts of the city. We saw many dogs and cats there. They are mostly tied by a rope and controlled by giant creatures named 'Humans.' They control machines too. Dad always warned me to stay far from them. He told me they are ruthless demons. He explained no words further.

I wonder if humans are so dangerous, how would they be if they could fly. They would not have spared us and destroyed our house. I thanked God for not giving them wings.

When I was three months old, my dad took me to give a lesson on how to collect food. He taught me where to search and not. He took me to different locations every week, and I remembered them all.

One day we saw a human distributing some grains outside his house. Many of our friends were eating from him. I asked my dad if we can also go there. He first declined, but later, when I insisted, he agreed on one condition that I shall not go near to any humans and collect food from far. I agreed.

I liked the food, a boiled, delicious grain, a fresh aroma, unlike our regular meals. After we searched for our share of food, we visited the same place the next day. A few hungry pigeons relied on the man to come with food. My dad told me they are lazy birds, and we should rely on no humans for food.

I carefully looked at a man who was distributing food. He was adorable. He extended his hands with food on his palm. I took a few steps towards him, but my cautious dad shouted at me. Dad was furious and asked me to fly back. He didn't speak a single word till we reached our nest.

I noted it enraged him on me. I didn't know why. The other day my dad didn't allow me to collect food distributed by any human. I could see sadness with him. That evening he told us what happened when I was two weeks old.

He said, "Your mum and I had gone to collect food. We found none. While we searched for more, we saw a human spreading biscuit to fellow pigeons. We joined them to collect our share. I didn't see the danger when that man caught me and took me to his home. I was afraid, but more than all sadness and pain that I saw in your mother devastated me. She loved me a lot, more than anything".

My dad stopped for a while. He is a strong pigeon, and I had never seen him crying, but that day I saw tears in his eyes. I think he missed mum.

'Take care of our son please…' were her last words when she lost her life.

I didn't have guts to say any words. After a few minutes, dad continued, "When that man reached his home, he kept me in a cage and took out a knife to prepare his dinner. Your mum followed me to a place and saw me through a window. When he took me out of the cage, your mum hit him on his eye. I escaped, but his knife hurt your mum. She struggled to fly, and he grabbed her. She pleaded with me to go away. 'Take care of our son, please…' were her last words when she lost her life."

Dad was crying, and I didn't know how to stop his tears. I hugged him tightly. He hugged me back.

I am proud of my mother. She was a superb fighter. On that day, I missed her more than anything.

I slept in his wings.

The next day, after we collected our food, my dad showed me a man who killed my mum. It was his routine to trap a pigeon for his dinner. That day he caught two. I remembered the separation of my parents again.

While we fly back home, I asked my dad, "Do humans trap us because we are inferior?" He said, "No, they torture everyone. A week back, unknown morons in a village of India killed a pregnant elephant. She died in a river, two days after she ate pineapples filled with firecrackers. Humanity has died, and it is at an all-time low,"

He murmured, "We collected food on our own. We are not their pet. We didn't deserve to be separated by those demons. God has given them authority over all animals and species on Earth, but they kill us as if we owe everything to them. A baby elephant in the womb didn't deserve such death, and your mother didn't deserve the separation…"

"Dad, that is all a son can revenge for his mother's death."

A week later, we saw the killer sitting below a tree. I took my dad to the tree and poured shit on the man. We flew away quickly. I know it ruined the killer's mood. I said my dad, "Dad, that is all a son can revenge for his mother's death." He smiled.

That day, I pleaded not to go for food to any human again. Every time I saw towards the ground, I found humans tiny and helpless. I was thankful to God that we could fly, and I was even more grateful that humans couldn't fly.

A few weeks later, my dad fell sick. It was raining. We were in our nest, and he could not collect food. Even when the rain stopped, it wasn't for more than an hour.

I took a risk and flew in the city to find food for us, especially him.

There was water everywhere, including the park. Neither I could see any pigeons in surrounding nor any human in the street. I found food nowhere. I remembered a kind man who had distributed delicious food to us. I knew where he lived.

I went to his window and asked for food. He came closer to me. I think he wanted to hold me, but I stayed far from him. I remembered my dad's advice, not to trust any humans.

On asking for food a few times more, he whispered in his language. I couldn't understand what he said, but he got up from his bed and brought a few grains to me. I collected them and waited for some more time, keeping a safe distance. He brought a few more grains. He is a good man.

I collected them and hurried to my nest. My dad was actively looking for me from his bed. I showed him food. He spoke nothing. He hugged me. He was happy for his son more than for food. He is smart enough to know where do I collect my food.

He recovered in a few days. When he fully recovered, we retook a trip to the city and searched for food. As usual, we saw that kind of human was offering food to pigeons. Many friends ate his food.

I smiled at him. I am not sure if he saw me. Even if he did, I don't think he will recognize me.

But finding him has restored my faith in humans. I don't say my dad is wrong. I understand his pains, but through my experience, I can say all humans are not the same. Humanity is still alive.

Someday when I shall travel to the city alone, I would like to revisit his place. In that silent visit, I shall take the best flower of the season and keep on his table, so he smiles. I hope he continues to serve and help needy birds as he helped me.

I shall still keep a safe distance from humans, including the good man.

This story was first published on The Suraj Blog, Medium

A Story teller and a Data Scientist

More stories from Suraj Ghimire and writers in Petlife and other communities.