A Story of Unexpected Romance on a Tropical Paradise 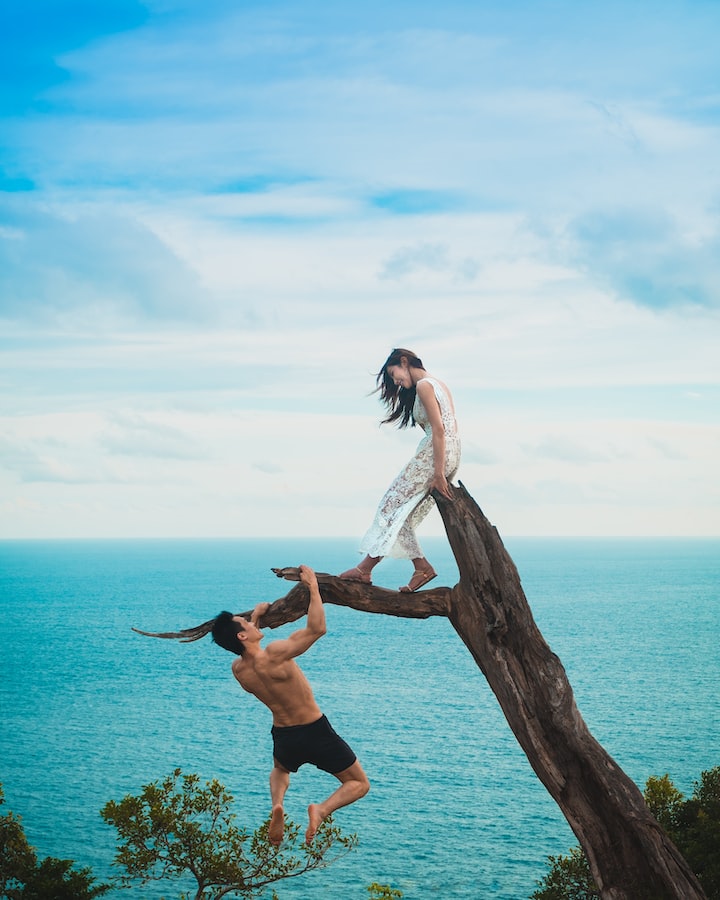 Photo by Tiraya Adam on Unsplash

there was a young woman named Emily. She was an ambitious, career-driven individual who had always put her work before anything else. She had always been too busy to think about love or relationships, but that all changed when she was sent to a tropical island for a business retreat.

The island was beautiful, with lush green vegetation and crystal-clear waters. Emily had never seen anything like it before. She was assigned to a group with several other business executives, but she quickly found that she didn't have much in common with them. That was until she met a man named Jack.

Jack was a simple man who lived on the island. He was a fisherman and spent most of his days out on the water. He was kind and genuine, and Emily was immediately drawn to him. They began talking and she found that they had an instant connection. Jack showed her the beauty of the island, and she showed him the thrill of adventure. They were an unlikely pair, but they fell in love quickly.

Emily was supposed to stay on the island for only a week, but she found herself extending her stay. She was having too much fun with Jack and she couldn't bear to leave him. They spent their days exploring the island, swimming in the ocean, and talking about their dreams and aspirations. Emily had never felt so alive.

As the days went by, Emily realized that she had fallen deeply in love with Jack. She knew she had to return to her old life, but she didn't want to leave him. Jack was everything she had ever wanted in a partner, and she knew she couldn't let him go.

In the end, Emily made the difficult decision to stay on the island with Jack. She knew it meant giving up her career, but she knew it was what she wanted. She wanted to be with Jack and make a life together on the island. They were an unlikely pair, but their love was real and true. They lived happily ever after, surrounded by the beauty of the tropical island, and the love they found in each other.

As Emily and Jack settled into their new life together on the island, they faced many challenges. They had to learn how to live off the land and adapt to a very different way of life than they were used to. But they were determined to make it work, and they had each other to rely on.

They built a small cottage on the beach, and they spent their days fishing and exploring the island. They also started a small business, selling the fish they caught to the local villagers and tourists. Life was simple, but it was also fulfilling and happy.

As the months passed, Emily and Jack's love for each other only grew stronger. They were each other's best friend and partner, and they couldn't imagine their lives without one another. They often talked about their future and their dreams for the future. They knew they would have to work hard to make a living on the island, but they were willing to do whatever it took to make their life together work.

One day, as they were out fishing, Jack proposed to Emily. He got down on one knee and pulled out a beautiful ring. Emily was overjoyed and said yes without hesitation. They knew that they would face many more challenges in the future, but they were ready to face them together.

Their wedding was a small and simple affair, but it was perfect. They exchanged vows on the beach, surrounded by the beauty of the island and the love of their family and friends. It was the happiest day of their lives.

Years passed and Emily and Jack's love for each other never wavered. They had two children and raised them on the island, teaching them the ways of the land and the sea. They also expanded their business and became successful entrepreneurs. They were able to provide for their family and live a comfortable life on the island.

As they grew older, Emily and Jack looked back on their lives together with joy and gratitude. They knew that they were an unlikely pair, but they also knew that their love was real and true. They were grateful for the twist of fate that brought them together on that tropical island, and they knew that they would always be there for each other, no matter what life had in store for them. They continued to live happily ever after, surrounded by the beauty of the island, their love, and their family.

I am Jesus Pizarro, a driven individual with a passion for success. I have a proven track record of achieving goals and exceeding expectations in both my personal and professional life.

More stories from Jesus Pizarro and writers in Marriage and other communities.