How To Properly Eat A Fererro Rocher Gourmet Candy

by Megan Wesby about a month ago in food

A Life-Hack You Never Knew You Needed 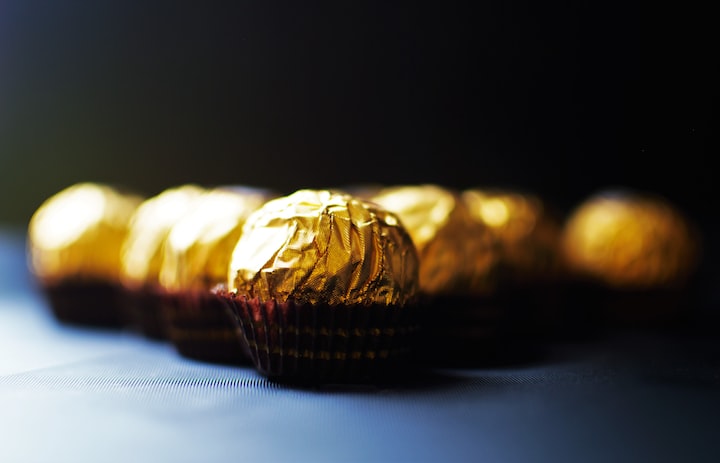 Photo by Isabella and Louisa Fischer on Unsplash

Gold. At its center, a magnificent whole hazelnut blanketed in rich chocolatey Nutella encircled by a light crispy wafer dipped in luscious milk chocolate and then lovingly dusted with finely chopped hazelnuts. This is the treat of the gods, I'm just sure of it! This is the coveted Ferrero Rocher gourmet confectionery.

Forgive the illustrious intro but when I say I don't even like chocolate, I'm not even close to kidding. However, these are, hands-down, my favorite treat for whenever I do find myself craving something decadent + rich. These little balls of joy make me feel wealthy, elite; and I can clear at least 3 of them in one breath. Come to think of it, I've got a pack of twelve sitting to my right at this very moment with four spaces hollow and a fifth that's about to be declared missing.

So, it's no huge surprise that as I was researching a topic to write about today that I defaulted to my most treasured of delicacies. In doing so, I stumbled across a blog where—get this—the author explains how to eat a Ferrero Rocher. I tilted my head slightly to the right. Come again, say what? You mean to tell me there's a "way" to eat these little golden balls of delight? I had to read this for myself, so I took a gander.

According to the article (which you can view here)—uh, careful, that link may open in this window and make you lose your place in this article, which I know would be disappointing because you're fucking riveted right now, but you can always go back to it when you're done because there'll be another link at the end of this excerpt anyway—but according to that article, there is a specific way these candies can be consumed that kind of makes sense if you desire to enjoy each layer in its fullness.

The first two steps are optional (in my opinion) but for the sake of consistency, the first step would be to ensure the candies are at room temperature. The next step would be to remove the golden foil wrapper and flatten it out into a perfect silver square. After that, you're instructed to nibble off the thin casing of chocolate and hazelnuts on the outside being sure not to damage the wafer shell underneath.

At this point you should be able to detect a line distinguishing the two halves of the wafer shell. Separate them by gently pulling them apart, exposing the Nutella and hazelnut center. This part is a bit of Russian Roulette because it's anyone's guess where the hazelnut inside will be. Whichever half contains the actual hazelnut, lick out the other side first and then allow that half of the wafer shell to dissolve deliciously on your tongue.

Then, lick out the other half shell with the hazelnut, being sure to nibble on the hazelnut last. Afterward, allow that half shell to also dissolve deliciously on your tongue. Finally, lick your fingers. Of course, if you're going to follow all steps, I'd highly recommend you ensure your hands are clean prior to beginning this feat just to be sure you're not eating everything you touched that day as well.

The funny thing is, I'd heard a woman once say this is how she eats these candies also. I, personally, have an entirely unorthodox way of enjoying them. This is one of those things that could be classified as a "trigger". You know, it's one of those things like the Tiktok videos of a Normal person doing something versus a Psycho doing it. So, if you're easily rattled, you may not want to read on—although, I'd strongly encourage you to because it's really not that bad.

Step 1 would always be to remove the foil on the outside. Instead of flattening it out to make a perfect silver square, I simply ball it up and toss it onto the table, next to me on the couch, or the closest receptacle while shouting, "KOBE!" as it floats inside. Next, I gently bite it in half, being careful not to end up with the half that has the hazelnut in it just yet. This isn't always flawless. There are many times it cracks in several places and I spend the next 10 minutes looking for the pieces that hit the floor before my dog finds them.

Nevertheless, once that half has been enjoyed, I put the entire other half in my mouth, expertly consuming the wafer and Nutella while saving the hazelnut in my cheek for absolute last—a skill I fostered by eating sunflower seeds my entire life. I then, usually, spend the next 10 to 20 minutes biting tiny pieces off of the nut itself and mincing those pieces with my front teeth until the entire nut is gone. This takes incredible patience but my OCD + oral fixation render it nearly insufficient, as I reach for another candy.

See? That wasn't so bad and here you are on the other side of fear. Go you! Incredibly enough, I was unsure as to if I would be able to deliver an engaging piece on something as seemingly simple as candy but I suppose this goes to show that when you're passionate and ultimately built to do something, you succeed at it no matter what. Oh, and by-the-by, here's the link for that article if you'd like to check it out for yourself (see? I kept my word). Byeeeeeeeeeeeeee.

food
Megan Wesby
Read next: 10 Remarkable Facts Of The 18th Century That Will Surprise You
Megan Wesby

The culmination of who I am can be summed up in one phrase—as someone very special to me put it—"a curated expression of love..."

See all posts by Megan Wesby →