by Stephanie Dube about a year ago in literature

What I Learned While Trying to Write my First Book

Ever since I was a little kid, I've always loved writing stories. For some strange reason, though, it never popped into my head when it was my time to choose a career path. I hadn't written anything ever since I had finished high school, and so, about two years ago, I started reading stories on the internet. Reading those stories made me want to write again. And so I started small. Short stories, not more than 1000 words. And then a bigger one.

And a few months ago, I started a story, a big one, the biggest I've ever tried to write, but I had no idea where to get started. I then made a lot of research, and I tried. I wrote a lot of things, only to delete them later, to edit them another way...and I struggled. In fact, I still am. I've been writing this story for many months now; mostly writing in my free time, so almost never.

I've learned a few things while writing my story, and I still am learning, but I thought I'd share with you some things I've found helpful during my writing process.

Don't plan too much.

Yep, you read that right. Pre-writing process can be a pain, all up until you find a way to work that fits with you. These are the three most commonly used methods in planning out a story:

Have a (believable) goal.

This might sound like very basic, but it can sometimes be really hard to think of. Having a goal in mind for your main character will make your writing easier. Does he want to get the girl? Does she want to get that big promotion? Do they want to solve this crime? A good goal is something (usually) achievable, but something that should take time. (Maybe unless you're writing a short story...) You need to leave some space for problems along the way. Things that will make our goal important. He wants to get the girl, but she's leaving in a few months and it seems like life keeps getting in between? She wants to get that big promotion because she needs the raise in order to pay for her rent? Or to pay for her mom's surgery? But her coworker is being a tough competition? They want to solve this murder case but someone is tampering with the evidence?

In all those cases, they have something blocking their way, which is what they need to overcome in order to reach their goals. It can be as simple as you want, but you can also make it complicated.

And by that I don't mean the classic "oh my god, I have low self-esteem, I hate myself, but look at me, I have the perfect figure, no pimples, and my hair smells vanilla." They have to have flaws. They can't be perfect! And NO, blushing easily is not a flaw. Make them get frustrated very easily and then say something they'll regret later, make them really bad at math while it's something important for the story. And don't make them all the same.

A little cliché never killed anyone.

Too much cliché does though. There are already thousands of "good girl / bad boy" stories, do you really want to write another one? If you do, add something to it. Make a good plot twist that will grab the reader's attention. And no, the good girl becoming bad for the boy is not the way to go. Get out of your comfort zone. Explore new territories.

Too much description kills the mood.

Maybe it's a personal thing, but I can't stand when writers describe things for two to three paragraphs. I don't care about what your character is wearing unless it's an important thing to know. "I got ready for school, putting on my black ripped jeans, my white t-shirt and my blue jean jacket. My Converses..." Okay, so? Is that in anyway important to the story? The golden rule is, don't describe it if it doesn't bring anything to the storyline. For example: "She was wearing a satin gown, the dark blue of the fabric bringing out the color of her eyes. I was completely absorbed by her beauty until I heard my sister gasp behind me. 'Oh my god. It's mom's dress! She stole it!'" That example was really bad, but you get the point.

Said is not dead.

When writing your story, you'll search for many ways to say the simplest things. You'll find some long, over-the-top words, that won't even fit the rest of your story. I've read many tips saying "Don't use the word 'said.' It's overused." And I kind of agree, but at the same time, I kind of don't. Sure, when people are fighting, they will yell, they will scream. If they are talking secretly, they will whisper, they will breathe. But if they are just talking, they will SAY stuff. Instead of using words like "exclaimed" and such, if you feel like "said" is perfect, then, just write the damn word down. Go as you feel, your intuition will let you know.

And lastly, PLEASE, for the love of anything good in this world, GRAMMAR.

I'm not even going to elaborate on this, but edit your story. A few typos here and there are fine, it happens. Nobody's perfect. But if I see any basic mistakes like "their/there/they're" and other things like that, it's a big no-no. Don't know how to spell a word? Google it. It's not that hard. Not your first language? Doesn't matter. Google things, grab a dictionary, ask people. There are plenty of resources for you out there.

I think that pretty much covers everything I have in mind for now. Hopefully one of these tips was useful to you, as they have been to me. Keep in mind, I am not an author, I write just because I like it and it makes me happy. I don't have any published words nor do I pretend to know everything.

P.S. If you are actually writing anything and would like to share it with me, please do!

Get your work out there! 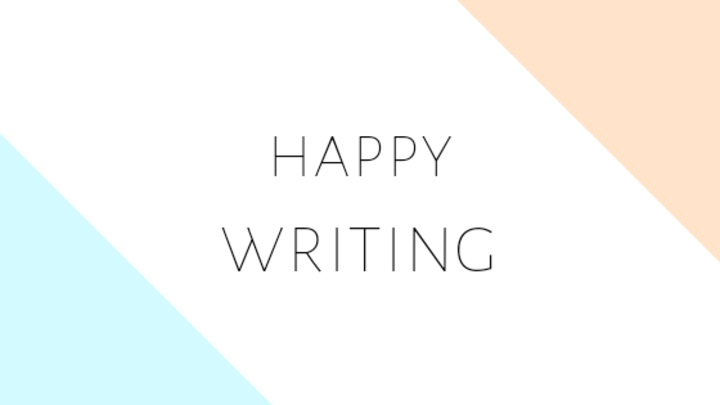 A 26 years old Montrealer, lover of books, beauty and travel.

See all posts by Stephanie Dube →