Why The Snake Has No Legs

by Gal Mux 11 months ago in literature
Report Story

My love for why stories 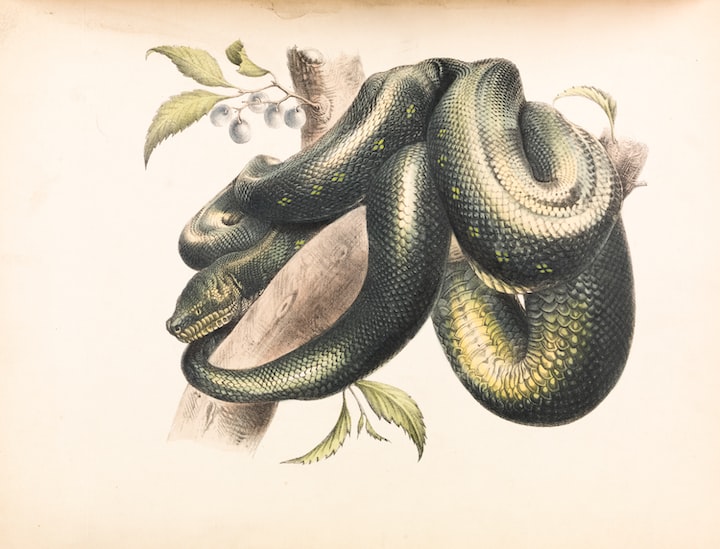 A long long long looooooong time ago, Mr. Snake was friends and neighbours with Mr. Millipede.

They lived happily and fruitfully next to each other for many years.

Mr. Snake was the calm one. He liked to cool down while Mr. Millipede was always fidgety. He had harbored dreams of being a performing dancer ever since he was a little boy. Through the years, he brought a lot of joy and excitement to social gatherings with his dancing.

Give him an audience, and he would give you a show!

One day Mr. Millipede's daughter was getting married. The ceremony was to be held in another village and that required days of travelling to get there. There would also be a lot of festivities in the ceremony that required a lot of dancing.

As it was harvest season in their village, Mr. Millipede approached Mr. Snake and they both agreed that the latter was to remain behind to guard their farms and manage the harvesting. And as soon as the ceremony was over, Mr. Millipede would head right back home bearing gifts for both of them. He would also host a small ceremony for Mr. Snake and the other villagers who could not make the long journey to the village of his daughter's wedding.

And one more thing…

Since there was going to be a lot of dancing, he asked to borrow Mr. Snake's legs to aid him in his dance. He wanted to stand out. After all, he was the father of the beautiful bride. He needed to leave a lasting impression!

" I will dance until I can't dance anymore! Just wait! " Mr. Millipede taunted.

Mr. Snake agreed to lend his legs to his friend of many years.

The next day together with a group of relatives, Mr. Millipede headed out for the ceremony.

The guests were well received. They ate and drank. Filling themselves to the brim. They shared stories, reminisced, laughed, and cried.

The ceremony was top-notch. The music was phenomenal. It could be heard from miles away. The rhythm of the huge skin drums could not allow anyone to sit still. They danced until they couldn't dance anymore. The father of the bride with his additional borrowed legs stole the show!

He break danced, he did the splits, he spun like a coin, he moonwalked, he was clapping, stomping, jumping, grinding, and sliding.

The crowd was loving it! They were clapping and screaming and shouting. Throwing money at him encouraging him to keep going.

Mr. Millipede danced all night entertaining a big, excited, and appreciative audience. Just as he had dreamt about for so many years. By the time he was calling it a night, he didn't have a drop of energy in him. But he was happy. Truly happy. The best he had ever been his entire life.

When he rose the next day at noon, Mr. Millipede met a team waiting outside his hut.

"Come with us. We have been looking for a lead dancer for our troupe for the longest time. The audiences truly love you. You are totally captivating and we can all make a lot of money." Mr. Hare the leader of the group pitched to him.

They didn't have to ask him twice!

After years of wanting it, his dream was finally being realised. Would finally be realised.

Mr. Millipede left with Mr. Hare and his group of singers and dancers.

Only on posters that reached his village about the huge success of ol' crazy dancer Mr. Millipede.

And that is why even today, the snake has no legs.

This story is borrowed from oral literature from Kenya and has been embellished by the writer.

Why stories are common in African oral literature. They are stories that attempt to explain the origin of things and the reasons behind other events or occurrences.

Growing up I loved to read or listen to why stories. They were fun, educational, informative, and entertaining. They also answered some of the questions that any curious child could have. Of course, the scientific method and reasoning were way beyond the reach of many African children growing up but why stories stepped in and provided the life lessons any imaginative mind could feed on.

I heard so many why stories growing up. They were a way of bonding. You remember the person that told you a particular why story. And you remember the lesson they taught you. I do wish there was a concise and easily available anthology of them to ensure that they don't die out and that children of today get to hear them and experience the magic. With globalisation, the uptake of new technologies, and the consumption of western media, African children are no longer sitting by the fire in the evenings just before bed to listen to these stories that were traditionally passed down from generation to generation.

Why are the skies blue? Why does the hyena limb? Why is the chicken afraid of the hawk? Why does the hare have a short tail? Why does the tortoise have a cracked shell? These are some of the questions an inquisitive child could ask. And they are several why stories explaining the reasons for this.

Why stories were never fairy tales. There was most likely no happily ever after at the end of the stories. They were always about the lessons to be learnt. Most of them offered a cautionary tale through the personal experiences of the characters in the story.

The hen was afraid of the hawk because it always reached for her chicks. And why did this come to be? Because she had lost his shaver. The hyena was not born limping. His limb came after an incident of greed. This particular story is intended to teach us to never be greedy. That greediness does not pay.

"Why the snake her no legs" was one of my favourite why stories as a child. Snakes are my greatest fear. I couldn't stand them even as a child. I don't like how they slither and slide. They creep me out and an attempted explanation as to why they are the way they are helped a little bit growing up.

Listening to why stories and retelling them to other children back then and even as an adult is one of the factors that helped my imagination and turned me into the creative I am today. It's the reason why I am drawn to storytelling as an adult.

The lesson from the story however is to teach us to not trust anyone even if we have known them for long. People are always driven by self-interest and they will always choose what is best for them at the expense of what is best for everyone. Never allow anyone to take advantage of you is a lesson I have carried from my childhood and from my favourite why story. It's a story I will tell my children.

I imagine to this day, Mr. Snake is still waiting for his legs. Mr. Millipede is probably a millionaire by now living lavishly exploiting Mr. Snake's kindness at the latter's expense.

The lessons from why stories like many forms of literature are open to other explanations and interpretations. Individuals as in the case of many art forms derive the lessons that resonate with them best.

What lesson did you personally learn from Mr. Snake's and Mr. Millipede's story?

More stories from Gal Mux and writers in Journal and other communities.