The truth about Money

by Meliha Avdic 8 months ago in humanity
Report Story

What is money in the real world? 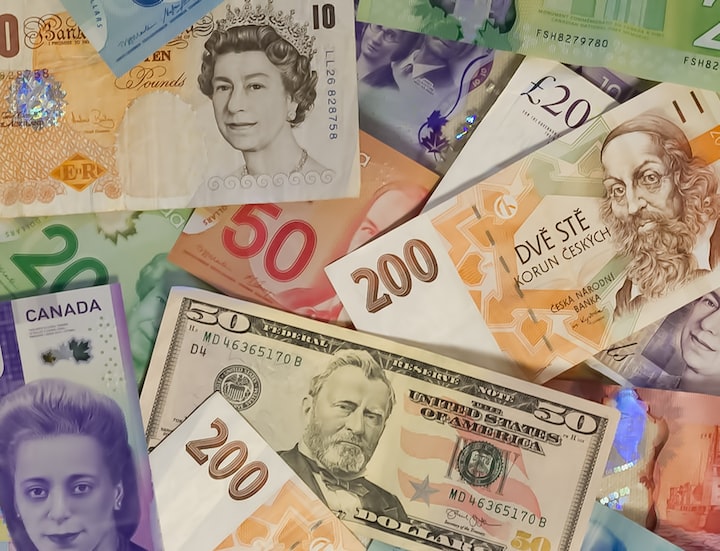 I still remember the best lesson I ever learned about money. It was in my second year of Economics, the first lecture in Macroeconomics. Our professor took out a 20-pound note, waved it around in front of an auditorium full of young students, and asked "Who can tell me what this is?"

It was a good night out. I mean, with 20 quid, you could really go out there and have some fun. So this is how we replied, giggling and looking around at each other, bright-eyed, wondering if he'll give it to us.

"To you, this piece of paper is fun?" Professor asked.

We replied that it was a few times, and he repeated his question an equal number of times. Eventually, he said: "So this is only good because you can exchange it?"

At that point, we all sat back. This seemed more like a trap than a question. Of course, we want to exchange it. What else could we do with the money?

And sure enough, there was nothing we could do with a 20-pound note but exchange it. Its value was in giving it away for something else. That something else had the real value.

"And why do you think you can exchange it?" The professor asked.

We all thought he was nuts. It's money. That's why we can exchange it.

Turns out, we can exchange it, because people have faith in it. People trust that piece of paper, they know 'its worth' (this statement is 'worth' another article at least), and hence they will give you real stuff for that piece of paper. If people didn't trust it, it would be worthless.

While professor gave an example how you might end up in some remote part of Asia or Africa where Pond Sterling might not be trusted, and how you might not be able to exchange it, I thought about the pre-war period. At one point, the banks flopped. I remember that clearly. It was chaos obvious on the streets, in front of ALL the banks. Even though people had money, it was worthless, a complete waste. They could not buy anything with it.

"I know this might sound like an odd question," professor said "but I will ask it anyway: What if you were to save it?"

It was an insane question. We were a bunch of 19-year-olds. Why would we save £20? But we knew that if we were to (by some crazy miracle) save it, it would not be spent. We were wrong. Apparently, all money is always spent. If you save it you're either buying 'security' or leaving it for a future purchase, or 'you're feeding your ego' - the status of money has become such that you can buy 'respect' (or so it seems).

This whole thing made 'money' sound like a really pathetic, complicated and confusing thing. So before we conclude that 'money', the pieces of paper only worth exchanging, has got everyone into some kind of irrational state, here are some assumptions worth considering:

1. If you have enough to buy anything you want, then you're free. In other words, more money = more freedom. Who doesn't like freedom?

2. If anything can be purchased, we must assume that people are no exception. If people, as the only real power in the world, can be purchased, then enough money could buy power. Power is something we like very much.

3. Getting money is hard, therefore if you can do it, you must be successful - this is an assumption, but it is completely false. The system is often responsible for some people making disproportionately more money than they should or would with their own efforts.

This fourth point is worth a book not just an article, and this is the real lesson. It is only when we look at the lack of money that we see the real value of money. It is true that money can't buy happiness, but it can prevent all kinds of problems. Preventing problems means that you have more of a chance at being happy. Not to mention that preventing those problems would mean preventing a dreadful life.

The idea of facing a life without money, a life with the kind of problems that comes from not having any money, is so dreadful, that many would choose anything over that. We would sell pride, joy and happiness to ensure that we have money. And that's where the fight for money starts.

"Lack of money is not an obstacle" - The moment someone says this, it is clear they have money and they have no clue what it's like not to have money. They might not have enough for everything they want to buy, but then again, (generally speaking) only those who abuse their employees have that kind of money in this day and age. And is that the kind of person you want to be? Is it? Is it really?

Seriously though… When you try to argue that 'lack of money is a huge obstacle', they'll say things like "but that's only $2". $2 is still money and 'NO!' some people do not have $2. Not having money, means NO MONEY.

"Everybody has $2." They'd say as if they enjoy being annoying.

Take my word for it, if someone's income is zero, they do NOT have $2. It's really simple math. So stop annoying everyone and get the idea. Some people are so unfortunate that they have NO money. Zero. And this is a very simple lesson that everyone should know (and I think we already do we're just reluctant to face it as a possibility) and accept as a fact. If we don't, we make it even harder on the poor souls who have NO MONEY. And they are already living a very hard life.

Fight for money is the hallmark of our day and age. We've become obsessed with it. Money is no longer there to serve us, we serve it. And this isn't even surprising. The idea of being looked down on because you have no money is so insulting, that many would rationally choose to insult themselves than to let others insult them.

And it's not like you can hide your lack of money. If you've cut your own hair, it shows. If you're stressed, it shows; especially if you've been stressed for so long, the stress damaged your liver (or caused any other kind of health issues) and that will pop up on your skin. If you don't have a car, a house, nice clothes - it all shows. And if you constantly refuse to go out and have fun, some people might not think that that's because you have no money, they're likely to think you're boring. Who wants to be with boring people?

If you have no money, you have to get that little amount, not enough to show, just enough to survive from somewhere. This means zero freedom, independence, power and self-worth.

Everything is harder and more expensive when you don't have money. Cheap options are really just delayed payment. For example: You need a plumber. You'll find a cheap one because that's the only kind you can afford. They will do a bad job, but if you're lucky, you'll be able to live with the mistakes your plumber made in your house. If you're not lucky, you'll need to call another plumber. Calling a plumber once is stressful, twice is four times as stressful.

Long story short, EVERYTHING, and I mean everything in yourself and your world is affected by money. So, most people fight to have some at least but would like to have more. Because the more you have, the further away you are from the nightmare of a life called 'life without money'.

At which point are we secure? Well, money doesn't grow on trees (unfortunately), so we are secure when we know that no one can cause us such a lack of money that we dread life. Causing someone to live without money is pure evil. There is no question about it. If you want to torture someone, make sure they have no money, and you're good.

As we look around, we see a small number of individuals creating a world where we can't trust anyone to ensure we're never without money. This lack of trust in people has raised our faith in money. And now we want money even more. Over the years, it spiraled. Now it's just money, money, money, money…

We are responsible for the status we've given to 'money', to that piece of paper. We need to take action and control. No person should have so much that people fear for their safety, the same people who have enabled that one person to have that much - in short, the employees. This is a systematic failure. The system needs to be fixed, hopefully before people choose to take back the trust they invested in money. Once that trust is gone, as I said earlier, money will be worthless. And while that may not seem like a big loss, it would cause chaos.

The simple fact is: Money is only worth what you exchange it for, it can be exchanged for real stuff because people have faith in it, and without money you have nothing. Money will prevent problems, but it will not buy happiness. It will give you respect if people choose to respect money over everything else. And money should be there to serve us, as individuals and as a society, NOT the other way around.

More stories from Meliha Avdic and writers in Journal and other communities.