by Ken 26 days ago in humanity

Reading books through the eyes of my daughter 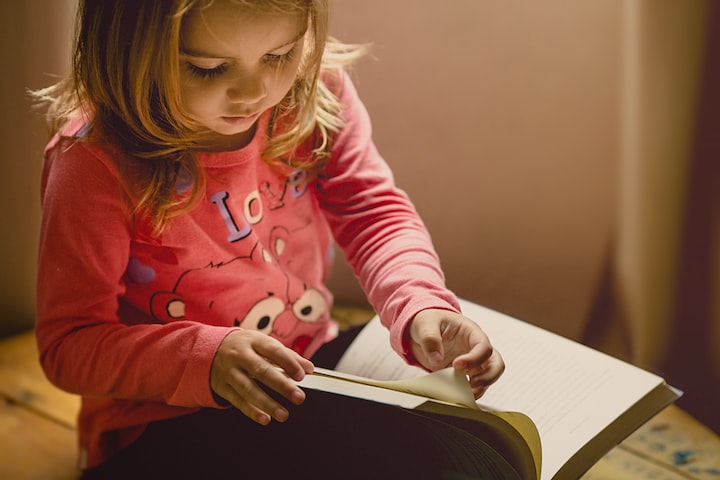 "Once upon a time in a faraway land, there lived a king. The king was very sad." I was reading a book to my three-year-old daughter when she suddenly stopped me.

"Really?" I questioned, trying to understand what she meant because she wasn't able to read yet.

"Yeah, really, 'member? It starts once uponce a time," she said.

I had forgotten that she liked to pretend she was reading the book to me. She would always start with "Once uponce a time." My wife and I thought it was so cute and funny that we never corrected her.

Children tend to see and hear things on a different level than adults. They are innocent onlookers, watching us interact with each other, learning from us how to talk to other children or their imaginary friends. Often, they understand the words we speak, but they don't understand the meaning behind the words.

"Imitation is the sincerest form of flattery that mediocrity can pay to greatness.” -- Oscar Wilde

But, is it? Let's say, for the sake of argument, a father displays his temper by saying, "Dammit, that hurt!" A child, imitating his or her father, might holler out "dammit" as well. That certainly doesn't flatter the father in a positive manner.

To counter this possibility, most adults will weigh their words carefully when they are around the younger crowd, for fear of setting a bad example. I say "most adults" because, when I look around in today's world, I can see so many examples of bad influences being allowed into our children's lives.

How many do you want?

For starters, one example of this is the colorful (to say the least) language being used virtually everywhere kids turn these days. We can leave out the egregious "n**" word many rappers shove into their songs. Leave that word out and you can still hear "F** this," or M**F** that," or c**s**," or many others being used in everyday sentences we speak to each other.

It doesn't end there, either. Terrible, hate-filled, angry outbursts are bandied about at political events, town hall meetings, union meetings, and places of employment.

Turn on the TV and choose a station. The producers of the shows that air are filled with violence, gore, cursing, and sexual innuendo. That, by itself, is a travesty. The other tragedy is that parents are not restricting their kids from watching those shows.

There are always those ever-so-subtle examples of bias against gays and people of color. The character roles these men and women play on TV and in the movies are usually not those of the rich or the mighty.

With those examples in mind, what message are we sending to our children? When you hear about one teen shooting another teen, or some young man or woman being arrested for possession and/or distribution of drugs, which role model influenced them to act in this manner? Was it a parent, a sibling, or, more likely, a neighborhood friend, or worse, a school friend?

The crowd shouts: "Lock her up!" and hurls "Okay, Brandon!"

Who, among all of our upstanding citizens, was the first to shout "Lock her up?" Which of our neighbors thought up "Okay Brandon" to use as an insult to the office of the Presidency?

We have allowed our sense of decency, manners, and our desire for results to be overrun by our lack of patience, frustration, and other outsiders instigating trouble for the sake of weakening our power.

When did we first lose respect for what are supposed to be role models in our lives? Guess what? Children are not blind or deaf to all of this. They will carefully weigh our words and actions, and many times will call us out because we aren't able to live up to the morals and principles we have tried to teach them.