Is it still a man’s world out there?

What I’ve learnt being a woman in a male dominant field. 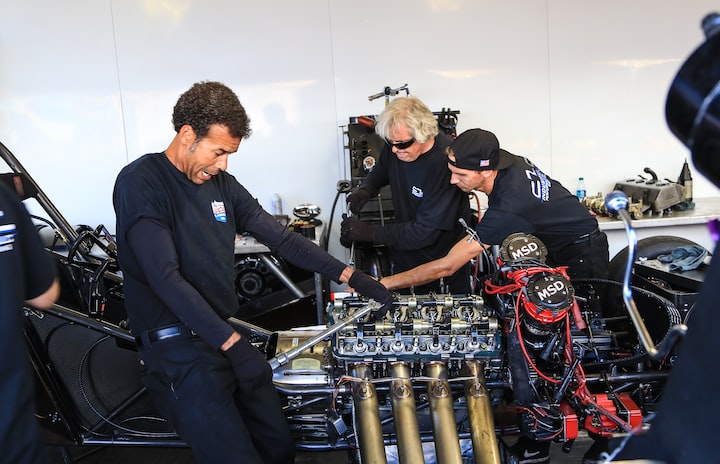 Photo by Glenn Hansen on Unsplash

Now I know some of you may not know anything about cars, and that’s ok. To have one of the only things that will come up when you search for a ‘car girl’ being a chick in heels pouring oil everywhere, is sexist and makes it harder for woman that do know about cars. Some males have absolutely no idea about cars, which is also ok. However, it’s always assumed if there’s a male and female together at a car, that the male knows what’s going on. I believe these stereotypes and assumptions are beginning to change, but there is still a long way to go.

How I’ve been treated in my workplace

I would say that I got fairly lucky with the workshop I am currently in. I have friends and majority of the time I am respected. I have had many occasions where I have been patronized, condescended and belittled. From males in my workplace that believe I need help. Especially if I haven’t asked for it. Sometimes you do need help and I am more than happy to ask when needed. But for someone to come over and assume I need help and then proceed to take over the job I was doing is infuriating. When this happens, I often just walk off and after a few minutes I come back, they tend to have left by then. I guess if there is no one there to witness your superiority why bother right?

There are also men at work that believe I can do it; these are the ones I tend to ask for help. You can help someone without completely taking over and you can do it in a way that makes them feel comfortable. So, to those that think they can’t help without a woman thinking you are patronising her. You can. It is definitely possible, and I think it just comes from education and understanding.

It is easy to feel alienated and left out when you’re surrounded by men. Yes, we are friends and yes, we can joke and hang out with one another. It still feels as though I’ll never be as close with them as they are with each other. It makes sense. Sometimes they’ll have girlfriends and don’t want to make them uncomfortable because I’m a girl. I’ve noticed that the guys are touchier (hugs, handshakes, play fighting) with each other than they are with me. Which is a good thing, but it’s clear they are being cautious about their behaviour. This can make you feel like an outsider, even though it’s respectful. Just because it’s different.

Some workshops are much worse than mine. Women can experience a lot of derogatory behaviour. It tends to be from older generations. Many of the men in my generation and younger are quite open to women being just as good in the trade as them. In another decade we may be much closer to a comfortable working environment for women.

How it has affected my relationships

On one hand, my family have been really proud of me, and close friends ask me questions. It is nice to be useful and for my skills to help the people I care about. They have never treated me different, except the initial surprise when I first said being a mechanic was what I wanted to do.

On the other hand, I have had two romantic relationships and it has caused friction in both. These two men were not secure enough in themselves. Something that I need to be cautious of in future. I never thought it would make much difference.

The first one, felt ‘demasculated’ as he put it. It’s not like he worked in an office or anything, is job was quite physical and male dominated. Still, he felt weird that I knew more about cars than he did. As a result, he didn’t want me to talk about work. Which often you do in a relationship. I couldn’t share my wins with him or vent about anything that happened. I heard lots about his job and co-workers.

The second one, used to work with me in the workshop. He had worked there for a while before we got together. Although once we were together, he didn’t like the fact that I worked with mostly men. He got jealous and would often be annoyed at me for talking to co-workers. I ended up quitting for a while, I became a receptionist. I put my passion on pause for him, because he was uncomfortable that I worked in a male dominated field. There’s not a whole lot of places to be a mechanic without men. I certainly can’t afford to open my own workshop yet. Something I’d love to do, to encourage other women.

Romantic relationships can be hard, you have to be careful who you pick as your partner. Someone secure who wants to hear about your day at work and wouldn’t keep you from your passion. So while it may be a hurdle in some cases, with the right person, it shouldn’t be.

When people hear that I’m a mechanic they jump to many things. A few of them being that I’m gay, or I’m a tomboy and I hate girly things. They ask why I wanted to do it and expect an answer other than ‘I like cars’. They expect something like my dad is a mechanic, which he is not. In reality, I enjoy being girly sometimes. I was a bit of a tomboy growing up, but I enjoyed girly things as well. I can’t paint my nails very often because they’ll just get ruined, but I do enjoy having them painted when I can. I get my eyebrows done, actually I do them myself. Outside of work, I like to wear ‘cute’ things. Sometimes that includes dresses or skirts or even heels.

I get asked the same questions when someone hears what I do for a job.

Is it hard being a girl in that role? Are you the only girl? Do you know any other girls that are mechanics? Have you always wanted to be a mechanic? Are people shocked when they find out? Do some guys think you are hotter because of it? Do you actually know anything about cars?

I have never heard someone ask a male asked these questions when he tells someone he’s a mechanic. Why would they? So why ask a woman.

While these questions are frustrating and upsetting at first, you get used to it. Sometimes you can even have a bit of fun with them and give very sarcastic answers.

As difficult as all of these things can be. There are some advantages. I have found that job opportunities are readily available. Some positions look favourably on your being a woman simply because they want more females. As the world progresses and begins to accept that woman are quite capable of working as a tradie, more and more companies want more females to show that they are ‘female-friendly’ and diverse. I’ve been head hunted already in my short career. I can only imagine it will get better for women as time goes on. So as bad as it sounds that they want me for my gender and not necessarily my talent, why not take advantage of the opportunities? With all the other stuff I’ve had to put up with throughout my career, why not take advantage of this one benefit.

Also in some cases, you are treated with lots of respect and caution. Some men don’t want to upset you for fear of a HR situation. Not particularly great reasons for them to treat me as a human, but hey it makes my life easier.

The last thing I want to talk about, is mindset. I like to joke around a lot, and I often brush off other people’s jokes or comments. With all honesty though, it can be really hard. Hard to be the only female surrounded by males. Hard to be treated differently. Hard for them to be comfortable around me. Hard when they feel they have to stop joking when I walk up to them.

The secret to making it even with the struggles, as cliché as it sounds, is not letting it get to you. It’s important to remind yourself they aren’t purposely leaving you out and that when they stop joking about something it’s out of respect for you. It’s also important to know what is crossing your boundaries and what isn’t. It took me a long time to understand what I was ok with and what I wasn’t. It also took me a long time to learn to accept that they are my friends but there will always be a difference in our friendship than in theirs with each other. I get a lot of self-satisfaction out of my job; it can be very gratifying to complete a difficult task. To prove that you can do it.

So if you got anything out of my rambling, I want it to be this.

It is tough to work in a male dominated field. You have to be sure of yourself. You have to know where your boundaries stand and be willing to make it clear. You need to grow a thick skin because there will be jokes. Understand that it may threaten a romantic partner, but it shouldn’t. It doesn’t make you ‘soft’ or a ‘sook’ to be upset by someone’s comment and that attitude needs to be a thing of the past. It is also really rewarding. You can make some great friends and have a lot of laughs. You will learn so much about yourself, and others. You will be taken seriously if you show that you should be. There are so many opportunities open to you.

It may be a man’s world out there still, but we can make it a woman’s if we try.

A dreamer who wants to learn everything possible about writing, and share some pieces in case someone enjoys it.