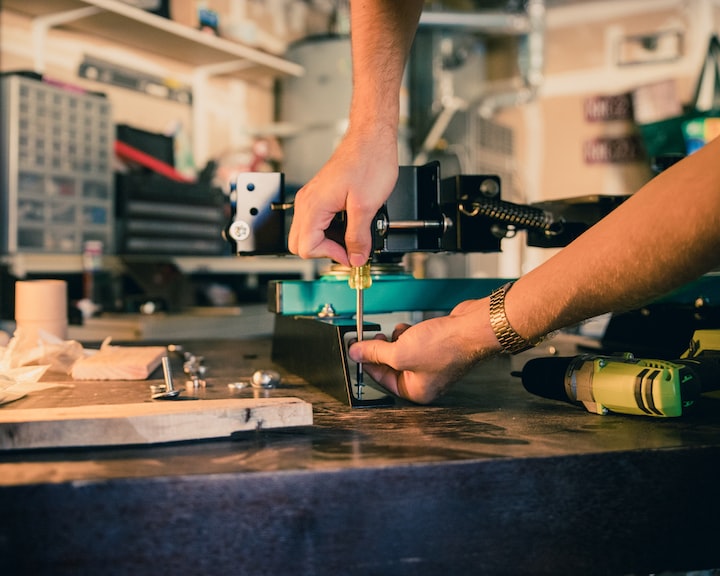 A Drill machine is a device used to make a circular hole in the job by removing a volume of the metal from it with the help of a cutting tool called a drill bit. There are many types of drill machine available, here this is about Drill Machine and Types of Drill Machine.

Also, the Drilling is a material-removing or cutting process in which the drill bit is used as a tool to make circular holes of the definite cross-section of solid materials. This tutorial teaches you about manual drilling machines and operations. But more precisely and for high Production to enhance Production System and more daily companies used CNC Automatic drilling machine.

This machine Process is the simplest one, it is estimated that about 75% of all metal cutting material removed performed from the drilling operation. Some drilling machines are also can be automatically controlled through Programmable Logic Controllers (PLC).

When drilling is performed by a drill machine the drill bit i.e. the cutting tool is rotated along its own axis into the job. During this time the job/workpiece is kept stationary. The drill bit can also be Used in Lath machines. Study about lath machines.

The product which is manufactured through Drilling and Lath machines mostly have high quality, but how you can say that Read This

Parts of a Common Drill Machine:

There are different drilling machines and their parts such as:

Head: It usually contains an electric motor, v belt, and v pulleys. The function of V-belt and V-pulley is to provide rotatory motion to the spindle at different speeds depending on the workpiece.

Drill Chuck: It is attached to the spindle which holds the drill bit.

Table: The drill table is used to place the work-piece on it, is adjustable and the workpiece is positioned on it. It moves upward, downward, left, and right. It sometimes has a chuck to hold the workpiece so that it could not move during the operation.

Base Table: The Main purpose of it is to give support to the whole structure and holds it firmly. It is a heavy casting.

The Column: Has a circular cross-section and holds the head and the table. It can also support the table that is used to hold the workpiece.

The above discussion shows how is the general construction or structure of a drill machine. Now we go for a further explanation.

Portable drill machine small compact type of drill machine which is used for making holes (drilling) in many positions or to be honest in any position. It is useful for drilling where it is impossible for a standard drill machine to make holes. A Portable drill machine doesn’t require the workpiece to be positioned as the machine itself is small and handy to be used. It can be used to drill holes in the walls, roof, etc. They have high speed and can make holes of different sizes. Previously they would only be A.C but nowadays they are also available with D.C motors.

In this type of drilling machine, a number of spindle feeds and speeds are available for drilling different types of workpieces. It is supplied with high power feed arrangements. It can handle medium-sized workpieces. They come in different sizes and each one has its own capacity typically ranges up to 7.5 cm dia drills. Upright drilling has further two types:

A-Pillar drill machine is an upright type of drill machine which has a column that is circular in cross-section while the other has a box column section. All other features are the same in these two.

Round vertical column supports the horizontal arm which in return carries the drill head while the arm on the column can be lifted above and below, can be rotated around at any angle and position above the workpiece, and can also be locked at any point. The drill head is used for rotating and feeding the drill. It is mounted on the arm and is moved in a horizontal direction. In the radial type of drill machine, the table can be rotated in 360ᵒ. It can drill holes up to 5 cm.

There are further three types of radial drill machines which we have discussed in our other article so we are not going to discuss them here because it is a long topic. These three types are as below:

In this type of drill machine, a lot of single spindle drilling machine columns are placed close to each other on a common base and they have a common worktable. By shifting the job from one position to another we can perform a number of operations on it.

It is used to drill a number of holes in the work-piece simultaneously and to reproduce the same pattern of the holes a number of times on the same type of pieces. It is generally employed for mass production. They have many spindles and all of them have drill bits that are fed into the workpiece at the same time.

Read more of our #Engineering posts on Vocal Media:

1. Difference between CNC, DNC, and VMC

Receive stories by Aamir Kamal in your feed
Aamir Kamal
Read next: Is Social Commerce as Pretentious as It Sounds?