#4 in the Wicked Carousel flash series! 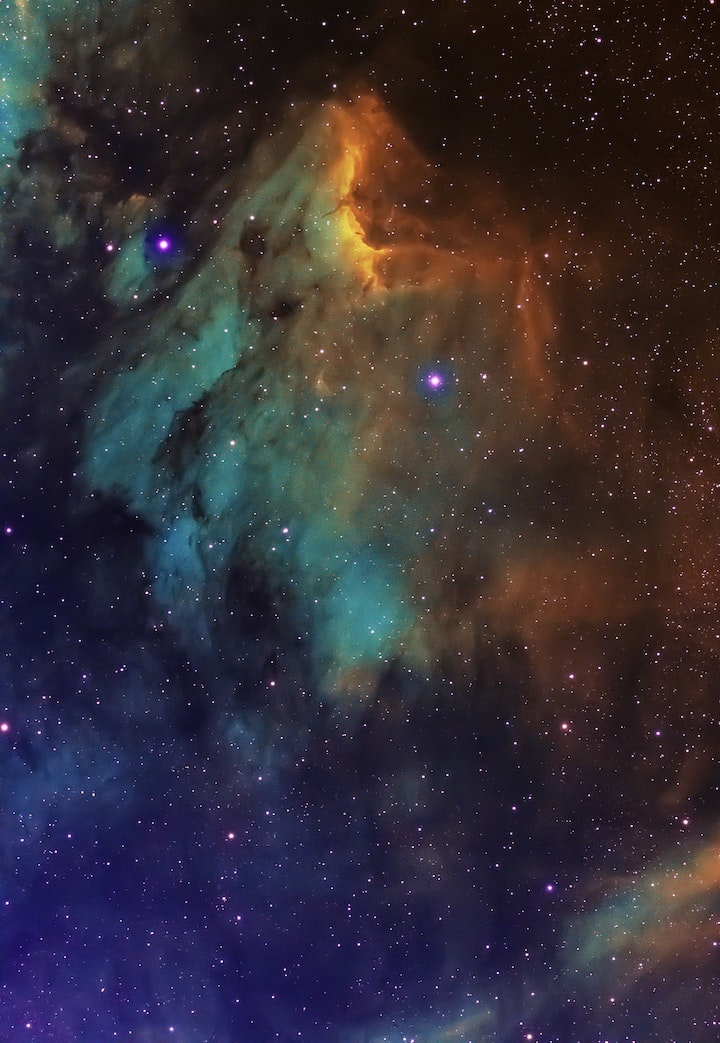 Zuu scrambled around a dark metal corner, fleeing towards the evac pods. Ze ran desperately, the destroyed and pilfered surroundings blurred partially by the tears- but not nearly enough to mistake the slumped bodies, mangled limbs missing owners . . . and all the ichor everywhere. All around, sirens were wailing and lights pulsed rhythmically- red, black, red, black, silver-

Zuu scrambled to a stop, a scream just gaining strength before getting choked off as ze smacked a gloved hand against zir mouth. Dangling before zir eyes was the arm of Head Botanist Beleir, lab apparel tattered and ichor nearly soaked everything from flesh to fabric. What was left of zir face was tattered and grotesque, clear to see that one of the creature's weapons had hit zir face.

Zuu froze in abject horror- Beleir was one of the most prominent minds in their scientific field, and a dear mentor to a lot of zir colleagues. Nearly all of whom were dead. The last time ze saw Botanist Beleir, ze had commanded all personnel to follow their evacuation plans, and grabbed a weapon alongside Chief Officer Muloo, the head of security forces. But none of them could have anticipated the sheer horror of what was to come. The bloodthirst and vicious brutality the foreign entities were capable of.

They were all supposed to go home once the last of the Orion Stars had finally bloomed . . . ze was finally going to see the new baby born to zir eldest sister, and now . . . would ze ever see that baby? Get to hug zir mother and fathers and cousins? Sisters and brothers?

S﻿obbing pitifully, Zuu pushed past the horrific sight and ran forward. The escape pods were so close, and ze just needed to make it to one and hopefully escape. It took a lot of work to ignore the sick feeling bubbling inside as ze leapt over blood stains and dead, broken corpses. But ze had to live. Ze wanted to live so bad. More would be done for them at a later date, when ze could make zir report in front of the governing council and alert them to the dangers posed by-

"﻿What the hell are these, more cocoons?!" Zuu heard the rage filled shrieking of the creatures, senseless garbles and grunts that came from their vicious mouths as they tore through and destroyed everything.

A﻿nd they were coming from the part of the ship the evac pods were.

H﻿orror tasted like green brine in Zuu's mouth as ze stumbled and searched blindly for a place to hide. Ze could do little but shimmy into a caved in portion of the wall, hidden by a downed column, as the creatures raced out and continued screeching in their language.

"﻿God, how many do you think are there?!" One of the creatures with long hair, clutched at their face and warbled . A creature with nearly no hair, just tiny tufts of fuzz sprouting from their head, wrapped its arms around the long haired one. The clothing that adorned them was now torn and dirty, tears showing off the naked skin of each creature in strange, pale shades.

"﻿I don't know . . . but we're destroying every bit of them. Starting with these things." The tuft headed creature pulled one of their tools into their arms- Zuu trembled, recognizing the monstrosity that blew off limbs and heads of her dearest friends- and started blasting away at the evac pods. Zuu had to press zir hands close to zir mouth to muffle a scream. That was Zuu's only chance to get out of their, and they had just destroyed it. Did those creatures know that they were a means of escape? Were they actually intelligent enough to make such a distinction? Or was it just their violent nature, causing nonsensical destruction without knowing or caring of any details or particulars?

T﻿he barrage on the evac pods from the creatures weapons caused a chain reaction. When the evac pods exploded, it created a large explosion, flames eclipsing where the creatures once stood- please, let them be dead, Zuu thought- and shockwaves causing the column in front of zir to collapse fully, putting Zuu in full view of the corridor.

Z﻿uu curled up into a ball and hid zir face as best as ze could, coughing as the smell of flames and smoke thickened the air. Trembling, Zuu raised up on zir legs to check the area. There were small fires scattered about, along the walls and floors just a few feet on either side of the door where the evac pods had once been. But Zuu couldn't see any of the creatures. Perhaps, Zuu thought hopefully, the blast had caught them too?

T﻿hat hope abruptly died when Zuu heard coughing coming from the end of the corridor where ze had hoped the creatures were laying, dead, and eventually a small figure appeared through the smoke. Zuu froze, terror filling zir veins and mind, as the creatures wobbled and staggered out from the haze of smoke.

I﻿t was the long haired one that saw Zuu first. "Lieutenant!" the creature screamed an alert to its counterpart, pointing at Zuu.

I﻿ want to go home, Zuu thought numbly. "I want to go home-" Zuu croaked, trembling arms coming up to shield her. The tuft headed male raised his weapon up and looked Zuu in zir eyes. Those eyes, filled with rage and extreme satisfaction at lining Zuu up in its sights . . .

Zuu made one last plea. "I want to go home-"

"﻿Shoot it!" The long haired one screamed once more, body coiling inwards and hands coming up near its face.

Z﻿uu's last thought was that, somehow, it seemed like that creature was as scared as she was.

Hey, thanks for reading and I hope you enjoyed this piece! If you did, you'll probably like the predecessor to this one- the third piece of this disconnected series: A Star Is Born! Enjoy the read~

More stories from Danny Fantom and writers in Horror and other communities.