What Lies in the Forest

by Maika Rothfuss 2 months ago in fiction
Report Story

Mysteries hide in the small town of Hillsworthe; surrounded by a dense forest where children often go missing. But that's why you don't go out at night. 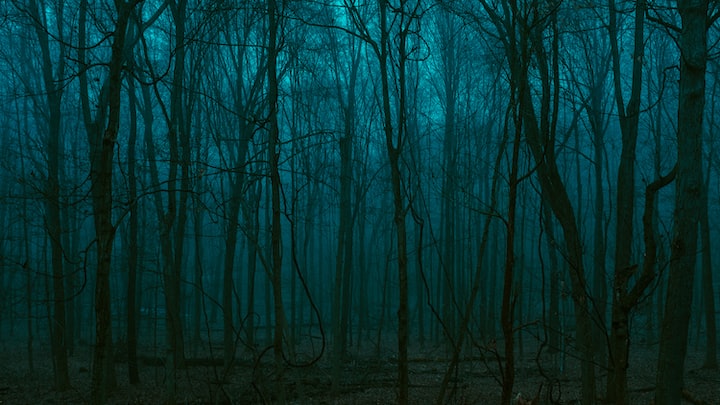 Photo by Keagan Henman on Unsplash

The cabin in the woods had been abandoned for years, but one night, a candle burned in the window. The light woke young Marius, who lived in the house next to the cabin. The flicker illuminated behind the dense trees, calling to him.

He had been warned not to leave the house at night, and never alone, but curiosity overwhelmed him. His eyes were focused on the flicker, his feet moving on their own.

Marius silently opened his bedroom door, crept down the stairs, and ventured out into the night; leaving the front door open behind him.

Rough leaves and branches cracked beneath his bare feet, poking him uncomfortably. Fear crawled up his spine as he approached the decrepit cabin. Broken boards jutted out from its wall, leaving open gaps that lead into darkness. The windows were smashed, broken shards laying across the porch. The door leered at little Marius. It hung loosely on its hinges, swinging open with a sudden, loud ‘bang’.

Marius walked into the open cavity of the house. The door swung closed behind him and the candle went out.

“Police searched and searched. His parents even got the whole town to look for him; but he was gone. The house took him, I know it.” Kylie said, stuffing another bite of sandwich into her mouth.

Justin shifted uncomfortably, but Jane leaned forward on the cafeteria table, perching on her elbows. “Bull. Those woods are crazy dense, he probably just got lost. It’s happened before.”

“Then let’s go check it out.” Kylie exclaimed.

“What… the house?” Justin replied.

“No, the library. Yeah, the house!” She nearly jumped out of her seat in excitement.

“I dunno… we’re not supposed to be in the forest at night.” Justin picked at his nails.

Jane shrugged. “Yeah, sure. Our parents are out of town, not like there’s anything else to do here.”

“What! No! I forbid it.” Justin snapped.

Kylie threw up her arms. “Wooh! Alright, let’s meet up…”

The bell rang to end lunch.

“… At seven. My house.” She continued, getting up. “No backing out now, see you later!” Then she dashed out. Justin gave a side glance at his twin sister, who just smiled cheekily.

He sighed. “I hope she doesn’t kill us.”

Hillsworthe was built smack in the middle of a dense forest that only had one “large” shipping road leading in and out. It was known for its lumber industry, as well as a very pleasant dinner that had a lively Sunday Karaoke night. Not much else happened in a town with less than four thousand residents.

Of course, there had once been a woman who killed seven children, then herself. And kids had been known to disappear from time to time, but that’s why you stayed away from the forest.

Dusk settled upon the sleepy forest town. The trio met up outside Kylie’s home, equipped with bags, water, and flashlights. The air was crisp and fresh; their breath icy as they spoke.

Kylie pulled out her phone, showing a location marker on her map.

“It should be about here.”

“You don’t even know where it is!?” Justin exclaimed.

She hushed him. “We’ll find it. I hope you’re not like this the whole time.”

“We have trackers on our phones, Jus. Don’t worry so much.” Jane comforted him.

They mounted their bikes.

“Yeah, if they work.” He muttered.

Kylie led the way; their lights fastened in front of their bikes. They followed a paved path down a cul-de-sac, that branched onto a dirt path, leading into the forest.

After a few minutes, the path hit a chain link fence. It stretched into the darkness, “do not enter” posted along it. There was, of course, a chunk of link that had already been cut through.

Kylie dismounted, leaning her bike against the fence. She pulled open the cut chain link.

“So, we’re adding trespassing to our adventure?” He commented.

“Stay if you want.” Kylie began to walk off, her flashlight bouncing in front of her.

Justin grumbled, but followed them, fumbling as he pushed through the fence.

“Why is this area closed off?” Jane asked.

“The community near the cabin asked the mayor to. Marius’s house is abandoned now too. It’s around here somewhere. They also think it’s haunted.” She leered at Justin, who shoved her. She laughed. “My mom think’s its haunted. I think they’re all silly.”

She glanced at her phone, which had lost service, but the red marker was close to their last location.

Suddenly, a white mist began to form around their feet. It got denser, until it became a thick fog. They could barely see the trees in front of them.

“I might have also forgot to mention that today was the anniversary of his disappearance.” Kylie chipped in.

“I hate you, Kylie.” Justin stammered. Jane gripped his hand, giving him a weak smile.

Justin grabbed her arm. “I want to go back. I don’t like this, Kylie. I’m being serious.”

When Kylie turned her head, her eyes bore into Justin. They were intensely fierce, burning into his. He jerked back, letting go of her. Then she smiled and the fog consumed them.

“Kylie!” He called out, then realized Jane was no longer grabbing his hand. “Jane!” He spun around, but he couldn’t see anything through the fog. Panic filled his chest, he felt like throwing up. “Jane! Kylie!” He called them again. “This isn’t fun!”

His ears rang, unable to hear anything over the bounding of his heart. He pulled out his phone, attempting to find Jane’s location. Somehow, it said she was a hundred feet in front of him. Then a twig snapped behind him.

He ran, accidently dropping his phone.

“Jane! Kylie!” He called to them again.

Justin nearly avoided the trees as they came into view. He tripped multiple times, but kept pushing forward. Then he saw something: a flicker.

He stopped in his tracks. The fog began to disperse, adding a few more feet to his visibility. Before him, only a few steps away, stood the abandoned cabin. A candle lit in the window.

He wanted to turn and run with every fiber of his being; but he stood there, grounded. He couldn’t move, frozen by his fear. The flashlight shook in his hand, illuminating a part of the ground with a broken sign. It read: Miss Fillie’s Orphanage. Though letters were worn, and the sign was badly cracked.

A shadow moved from where the door gaped open. Slowly, still shaking, Justin rose his flashlight to the door. Jane stood in front of it and his heart made a leap.

She reached out to him, smiling. Justin made a step forward, but Jane screamed; suddenly pulled into the darkness behind the door.

“Jane!” Justin screamed, running in after her.

The door swung closed, a stillness falling over the cabin. The candle remained lit.

Only a minute past, before the silence was broken by crunching leaves. Kylie approached the cabin, but this time the door opened smoothly. A woman dawned in a fit, black dress, emerged from the darkness. Her skin was tightly stretched around her bones; her eyes cloudy and white, unblinking.

“Did I do well?” Kylie asked softly.

The woman’s mouth did not move, but she still spoke. Her voice hissing. “Yes, child. Bring me more.”

The woman faded back into the house, the door closing with a loud creek.

The candle went out.

I've loved to create stories ever since I was little. It's taken a lot for me to actually show anyone my work, but I hope to inspire and create wonder with the tales, characters, and worlds I've created.

More stories from Maika Rothfuss and writers in Horror and other communities.