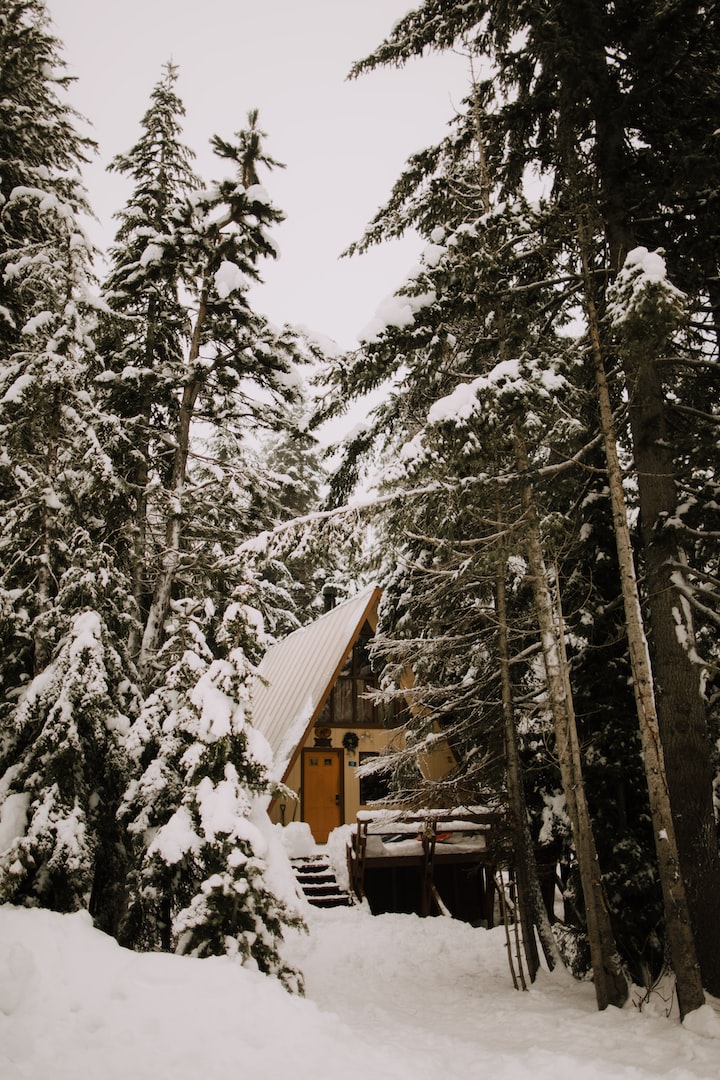 Photo by Blake Carpenter on Unsplash

We drove up the snowy, winding road towards the cozy A-frame cabin. I looked into the rear-view mirror as we curved around another corner. Toby was asleep in the back seat. The smile had been glued to his face from the moment we picked him up from school. Katie was sitting beside me, talking non-stop about the latest work drama. I tried to follow along and nod at the right times, but most of my focus was on ensuring we stayed on the road. The cabin had been in the family for generations, it felt like my true home. But I wasn’t exactly familiar with the drive.

Once we arrived, I quietly opened the back door to lift Toby from his seat and carry him inside. I nearly bumped into Katie as I stepped through the doorway.

Katie was standing still, looking at the ground.

“There’s mud and dirt and sticks all over the floor,” she said. “And footprints.”

I froze where I stood. My mind raced for an explanation, but I came up empty. Why didn’t I fix that?

“You were up here by yourself last month. Clean up after yourself a little better next time,” she hissed.

I sighed in relief. Katie went to say more but I pointed to Toby in my arms and pushed my finger to my lips. Knowing that I had quickly escaped further wrath, I snuck by her to put Toby to bed. She ducked into the laundry to get the cleaning supplies.

When I came back down from the loft room upstairs, Katie sent me to get rid of the debris outside. That’s when I saw him again. And by him, of course, I mean me.

Just as I opened the door, I saw myself lurking behind a tree on the other side of the drive. Lips blue, bloodshot eyes frozen open, a gash across my neck. The blood that had spouted from the fatal wound was frozen to the remaining clothes I was wearing.

Then, a moment later, I was gone again.

It wasn’t the first time this had happened. Just over a week ago, back at home, I went to close the blinds before bed, and I saw him me through the window. At first it seemed like a reflection. But then, the same tell-tale marks became obvious. The lips, the eyes, the neck…the blood.

It had happened twice more. Then Katie suggested we come up here for the weekend. I really didn’t want to come back so soon. Not back to the snow and ice. But I had no reason to say no.

Nothing else happened for the rest of the night. But the next morning I saw him twice more. We were outside, then, all of sudden, it felt like the temperature dropped another ten degrees. Then I could just feel it, another pair of eyes on me. The second time it happened Toby was outside with me, and I swear it started to walk closer.

I made an excuse to rush us back inside. Then I told Katie I was going to get some firewood.

“We have plenty in the shed” she said.

“I know, but I saw a fallen tree down by the river last month. I want to get it before it get’s wrecked in this weather. I might be a while,” I replied. She didn’t seem happy with my response. She hadn’t seemed happy for a while.

“Okay Matt… If you really need to,” she agreed.

I gave her a quick kiss and headed out. Once I was over the hill I turned away from the river and up to mountainside. It was a short, awkward climb to a small cave in the side of the hill. I’m not even sure anyone else knew about it. Up until a month ago, no one else had ever been in there. I dropped onto my belly and started to slide in through the tiny entrance. It was only a few feet to the larger chamber behind. Halfway through the chill hit me again. I shuddered. He appeared suddenly in front of me, arms reaching to claw at my head. Unable to retreat, I close my eyes to protect myself.

When I opened them, he was gone again.

Moments later I was inside the cave. I pulled a small torch from my pocket and moved to the back left corner near a pile of smaller rocks. I started to move them out of the way, slowly at first, but I quickly became frenzied as I blindly tossed the rocks aside.

Then I saw an arm, a shoulder, and finally a neck. There was a large gash across it. I pulled more rocks away from his face to see my reflection staring back, but with the added feature of blue lips and bloodshot, staring eyes.

I let out a breath I didn’t know I had been holding. Suddenly, I stopped feeling so worried, and even started to feel a little happy.

“Geez Matt, will you leave me alone?” I asked him. “I’m just trying to enjoy some time with your family. Well, my family now.” I tossed a rock back towards the pile.

“Seriously, you were starting to creep me out,” I joked as I reburied the body. When all the rocks were back in place I paused, standing next to my buried lookalike.

“I’m sorry it was you who found this cave Matt,” I said. “I’d been watching for so many years, waiting, just waiting for a chance for someone to come, so that I could take their shape, replace them and escape. You’ve got to see the bright side. I’m free now. And you helped me do that… I promise I’ll take care of our family…”

When I felt like there was nothing more to say I headed back to the entrance. Down on my belly, I turned back to the mound one last time.

“But seriously Matt. Stop haunting me.”

Then I headed back to our cozy cabin.

“Where is the wood?” Katie asked, as I stepped inside.

“Ah… turns out it wasn’t that good anyway,” I said, fumbling for an excuse.

“Something’s just not right with you at the moment Matt,” she said, concerned and curious. She let it pass, for now. “Come help with dinner.”

Fiction writer and traveller, hoping to one day live on the road and write from there. Seeking challenges to broaden my skills and influences through a diverse range of writing techniques and genres.

More stories from Blake Johnson and writers in Horror and other communities.