by Matt Loftus 7 months ago in movie review

In the world of horror, the anthology film is a frequent source of ghoulish fun. Usually comprising a handful of amateur efforts from unknown directors with an abundance of gore on their mind. However, for every VHS and Creepshow success, there are lesser-known "gems" that also have helped carve out this niche sub-genre of horror. I actually would love to write more on the subject of anthology horror and its impact on cinema, but for now I'm going to pick a specific one that has recently come to my attention. A movie that, quite frankly, is trash of the lowest order and makes no apology for it. So read on as I introduce you to 1987s Chillers, and explain why it needs to be seen to be believed.

Chillers is produced by the Troma company, a brand that has specialized in sleazy cinema for over 40 years. Low budget and low acting quality have never stopped them from making movies, and Chillers is a classic example of this. A straight to video effort that was destined for obscurity on its release, but has found an underground revival over the years. I mean what would you expect from a company that prides itself on making The Toxic Avenger movie series? It's as much a mascot for their company as Mickey Mouse has been to Disney, and they're not ashamed about that either. The plot you ask (you didn't? Well I ain't stopping now):

Five stranded passengers at a bus station recount their worst nightmares to one another. Tales of vampires, demons, maniacs, and ghosts to chill the blood, and keep them awake until their connecting bus arrives.

Every anthology movie out there has a wraparound segment that involves some excuse for these different stories to manifest. It's used excellently in VHS and its sequels, as a character watches video cassettes, and each one has a scarier "true" tale on. In Chillers, they go for the rather obvious "It was a dream I had" scenario that has been around since the Wizard of Oz days. Frankly, while not the most original idea to use, I certainly couldn't let it hold me back from taking in this unusual flick. Although perhaps I should have... 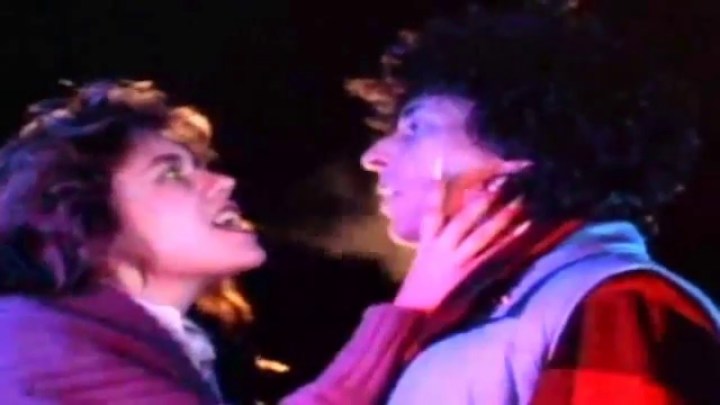 Well, would it actually surprise you to say it wasn't the worst movie I have ever seen? I am after all a horror film nut. That being said, the movie breaks so many basic rules of how to tell a scary (or even cohesive) story that even I almost couldn't quite face the daunting task of finishing this movie. I managed to keep hope alive that the following segment would vastly improve the movie, but sadly I was always wrong.

Overall I have to say that although the movie has a combination of monsters, blood, and guts, it'll most likely be hit or miss with even the most patient horror fiend. The five weird tales mostly feel padded out for runtime and would have worked better by taking out ten minutes per-segment. That being said, if you're a fan of the "so bad it must be good" styled filmmaking than you probably will get a few laughs out of this. Overacting and severe lack of acting lead to Troll 2 levels of hilarity that make Chillers a curious entry indeed. It is definitely trash of the lowest calibre, but makes no apologies for it. Something, I think you'll agree, that Hollywood has been afraid to make for a very long time.

I give the movie a one out of ten.

Oh, and lastly, if you have the time, why not sit and watch the full movie reaction video with me below. I point out some of the sillier points of the movie, and also eat biscuits. Just in case you're into seeing that sort of thing.