by Lila Renee 4 months ago in fiction 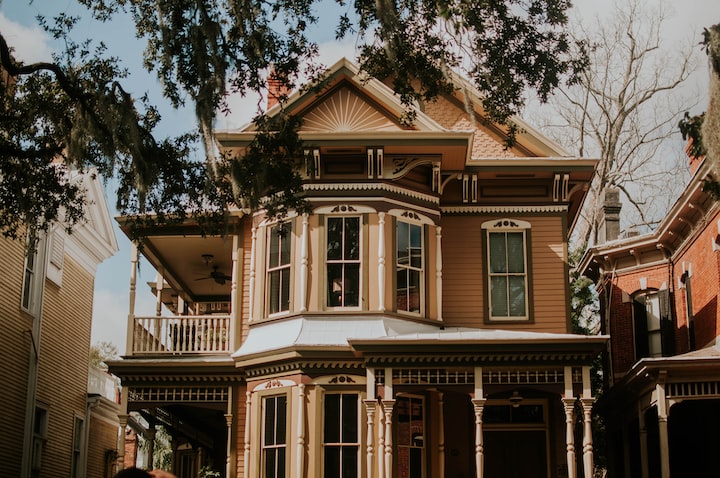 Photo by Jessica Furtney on Unsplash

Mary Patrick had lived in her home for years, and no one ever bothered her. She didn't bother her neighbors either. They were kind enough, occassionally someone would send one of their boys over to help her with her groceries when they seen her carrying her grocery bags inside, and she'd reward them with some candy or a dollar or two. Nothing more than what would be expected of an elderly lady living alone.

When Russell Hancock moved in next door, he kept to himself as well. Mary thought of him as nothing more than a wealthy businessman with too many big ideas. The house hadn't been his first pick, but he had ended up settling on what was available at the time of his relocation. Mary's house though was grand and stately, and he couldn't help but envy the widow.

After a few months of living in his house he finally decided to approach Mary. After all, the woman looked to be entering her nineties, how much life could she possibly have left in her? And from what he could tell, she had no children or grandchildren to leave the house to, so he had to make a deal with her before it was too late.

He walked up the front steps of her porch, and straightened his tie before ringing her doorbell. He even took a step back from the door, allowing Mary the opportunity to open the screen door and invite him in. As he waited for her to answer the door he looked around at the porch, the rocking chair and table that he never seen used would definitely have to go once he was able to take over the house, and the shutters needed to be repainted, but other than that, the outer facade was in near perfect condition. Mary had taken good care of the home over the years.

When she finally opened the door she stared at Russell, blinking for a moment. It wasn't often anyone other than a mail carrier knocked on her door, so to see her neighbor standing there was a bit of a surprise. "Mr. Hancock," she said, forcing a smile, "How can I help you today?"

"Well Ms. Patrick, I have a proposition for you. I'd like to buy your house."

"Really?" she grinned and laughed, which angered Russell, but he was careful not to show it, out of worry that she'd not accept his offer. "You don't beat around the bush at all, do you? You just go straight to the point."

He cleared his throat and straightened his tie again, a nervous habit he had developed early in his career. "Ms. Patrick, I mean no disrespect by asking to buy your house. I've admired it ever since I moved next door, and from what I can tell, you don't have anyone to leave it to after..." he trailed off, unsure of how bluntly to put things after her initial reaction.

"After I croak?" she finished for him. "I don't see how that's your business."

He straightened his tie again, "Like I said, Ms. Patrick, I don't mean any disrespect. Its just that it is a beautiful home, and I'd hate to see it abandoned or torn down. Let me buy it from you, and you can continue living in it, rent free, until you do pass. Any repairs it needs, any restorations, I'll take care of all of it, and you can keep on living there as you always have."

Mary seemed to think about the offer for a moment before she finally nodded. A small smile started pulling at the corner of her lips, and if Russell didn't know any better, he would've thought there was something devious playing in old Ms. Patrick's mind. "And how much are you willing to pay for my house?"

"Anything you believe it's worth. Money is of no issue to me." If he was lucky, he'd not only buy her out of the house, she'd take the money and move on to spend her remaining years somewhere else.

"Well, why don't you call and have a property appraiser come out here. We'll discuss the deal a little further and start having a contract drawn up."

Russell was shocked to say the least that Mary had been so willing to accept the deal. He had been expecting to negotiate a little harder with her than what he had actually ended up doing.

Over the course of the month that followed, everything went together without a problem. Russell bought Mary's house for a few thousand, and Mary continued to live in the house with no issues. In fact, Mary continued to live there for another decade with no issues. Russell began to get impatient at this point. They were approaching the eleven year anniversary of the day the sale of the house was finalized, and from what he could tell, Mary seemed to show no signs of aging any further than she already had. The woman had to be approaching a hundred years old now, he couldn't quite understand it and was beginning to get quite impatient.

Russell quickly bounded up the steps of the porch and rung the doorbell. Even though he wasn't wearing a suit on this particular day, he still couldn't fight the nervous tic and tugged at his shirt collar as he stepped back from the door, waiting for Mary to answer.

"What can I do for you, Mr. Hancock?" she asked after opening the door.

"Well, Ms. Patrick, I wanted to talk to you about that deal we made on the house years ago."

"Of course," she didn't seem surprised at all, and actually pushed the screen door open. "Why don't you come inside where its more comfortable?" She'd been expecting this day to come and a small smile tugged at the corner of her mouth as he stepped inside. "Come into the parlor," she told him, leading the way into a room off the side of the foyer. He had no choice but to follow Mary into a room that faced away from the street. "Sit, sit," she motioned towards the couch. "I just made tea, would you like some?"

"Um, sure." The calmness of her demeanor unsettled him, but he tried to convince himself that it was only because he'd never actually been inside the house alone with the old woman. Mary slipped out of the room and returned a few minutes later with two glasses of iced tea. She handed one to him and took a seat in the chair across from him.

"So what was it you wanted to discuss?" she asked, again seeming unnervingly calm. "You aren't considering going back on our deal, now are you? You wouldn't send a tired old woman out onto the street, would you?"

The way she asked it almost seemed like a threat. He cleared his throat, but before he could respond she continued.

"You know, Mr. Hancock, its been just over a year since you bought the house. And I don't get much of a retirement, so its not like I have money to be able to just up and move if you've decided to no longer honor your promise."

"Actually, I..." he started, but he was at a loss of words. The more she spoke the more sinister she began to sound. He was starting to sweat, and tugged at his collar again. This was unusual for him. He didn't earn his prominent position within his company by being nervous. In fact, no meeting in his entire career had ever put him this on edge before. He took a sip of the tea. Was that lemon he tasted in it? He sat the glass down on the coffee table, and attempted to resume his thoughts, looking up at Mary. Something wasn't right though, her features seemed to be shifting. The wrinkles in her face were moving, almost as if they were vanishing into her skin. How could that be? Had he been drugged? Did she suspect what he was there about beforehand and poison him with the tea?

"Mr. Hancock, you don't look so good," she said, fake concern oozing from her lips. Even her voice sounded different, younger. He wiped the sweat from his forehead and looked at her again. Her face was definitely changing, he was sure of it, certain that it wasn't a hallucination. "Perhaps you should go home and get some rest?" she suggested, her voice almost sounded like a purr now, and her eyes had definitely changed, they were more catlike.

"No," he shook his head, trying to rid whatever feeling this was taking over him and recollect his thoughts. "Its important that we discuss this Ms. Patrick." He avoided looking at her, but it didn't stop him from hearing the odd pops and crackles that came from her direction."When I bought this house, I had agreed to you staying here for as long as you're alive, but to be quite honest, I didn't expect you to live this much longer, and I think we should reconsider our terms."

She didn't respond and he didn't look at her, afraid of what he might see. This is ridiculous, he told himself. He bought the house, he was the rightful owner, he had never been required to let her stay there. It was kindness that he had done so, and now she needed to move on. If she wasn't going to move out, he was going to get rid of her another way. He was lost in his thoughts and hadn't realized Mary had already gotten up and moved across the room. Now she towered over him. "Oh, Mr. Hancock, didn't they teach you in business school that you need to read the fine print in contracts. You're in breach of our agreement."

He looked up at her and was stunned by the creature standing in front of him. He was certain it was Mary, but she looked so different. Not only did she appear younger, and definitely taller, her face was so odd. She looked human, but at the same time there were slightly feline features, her nose and mouth definitely didn't look right. He couldn't move, he couldn't think. He was stunned at the sight in front of him. Russell blinked a few times, trying to bring himself out of this trance-like state, but before he could react, Mary already had him by the collar, lifting him up off the couch.

Russell wrapped both hands around her forearm, feeling her muscles under his fingers. She was superhumanly strong and he knew this was the end. Even before she opened her jaw to reveal the sharp elongated teeth, he knew there was nothing he could do to stop her.

Mary sat back down in her chair, "Russell Hancock," she breathed, as she sat back down in her chair. There was more popping and cracking as her body transformed once again. Her features started to shift as well, but instead of going back into the form of Mary Patrick, she took on the same features as the corpse now laying on her floor, staining her rug. "I think I'll enjoy being you for awhile."

Read next: What If You Were Buried While Still Alive?