UFO Sightings, and the danger behind it

by Queen anonymous 4 months ago in supernatural

my story and perspective 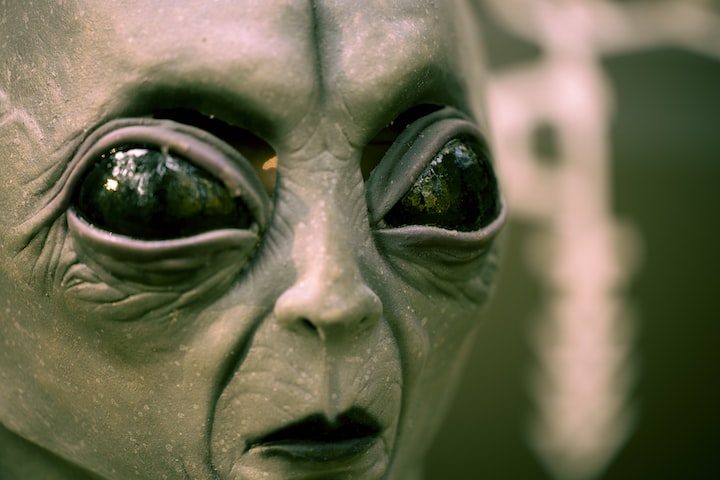 Are you afraid of the truth? or maybe you don't believe yet. I guarantee you will after this.

For many years you have heard a lot of theories about aliens and UFOs, and I'm ready to reveal the truth to all of you even if I get trouble for revealing it. I'm going to start with my personal experience and story and I will tell you what they really are. Get the campfire ready and the marshmallows going.

It was a winter night under the stars, that me and my boyfriend at the time went on a romantic walk by the river path near my house. It was around 7 pm that the cold breeze was coming in and the moon was shining bright. Our hearts beating fast as we pace quickly on the concrete path trying to escape our trembling.

Soon Sam begins to glare at the sky, looking right at me. Suddenly he stops, looking back up and pointing, with surprise in his face. He then blurted out "look! look up there, do you see that?" I lifted my face in wonder to see what the commotion was about. I squinted my eyes a little more and said " I don't see anything. what am I looking at? where are you pointing exactly?" He points again this time moving me slightly with his hands on my shoulders. I squint a little more, and there it was, something I had never seen before. my face expression changed completely in that moment.

I couldn't believe my eyes! I said to him" WTF!! what is happening as I watched the phenomenon. My you we were alone in what is almost the wild.

Now I will explain what I saw with my own two eyes in that moment. I saw what looked like a big star, or very bright light that began to move from the left to the right. As it moved from one side to the other the light would come forward or closer to the earth and then ascend or disappear as it went to the other side. Oh, but this is just the beginning! As that star was fleeing to the right and far from view, another one came from the same direction as the first one did, right before it disappeared. This second ray of light did the exact same motion, and another followed along.

By now it seemed as if the rotation of the stars was coming from a circular figure since this process happened about 14 times in a row. Yes, I know it's so nerdy, we counted them. It all happened consistently within a short period of time. Eventually it stopped, or as I should say, the last star vanished, and no others appeared after that.

We were not shocked just yet. We decide to start walking towards my house again. He starts telling me a story of something similar happening to him in the past as we take that first step. Within just a few seconds of the stars disappearing he was soon interrupted by a gush of hot air, what felt like someone just turned a heater on. Let me remind you that it was during a cold winter night, and we are no were near any buildings, houses, or actual streets. We were in the dessert on a walking river path. Finally in shock we both look at one another, and I know we were thinking the same thing in that moment. I asked him anyway for reassurance "Is it just me, or do you feel that heat too?". He quickly says "yes!" so we start really power walking now. The heat lasted only about a minute, not too sure.

When it ended, we were almost at the end of the path. Only 10 minutes from my house, and we made it to my home safely.

Now that I have told you one of my real-life sitting stories, I will tell you what I really think about Aliens being real. Yes, I do believe they are real from various experiences I have encountered. However, I don't actually think they are from outer space. I have much evidence, and through much research indeed. For many years I thought the same as you, that these beings are from another planet. I have come to the conclusion that these so-called aliens are truly spiritual entities' that the government will not reveal to you. I will not go into too much detail, but the bottom line is they are of a different realm within this earth. A dark entity indeed, disguised to deceive the world. a Demon!

That is all there is to say for now. I will explain everything to you on a deeper level another time. Although the experience was real, the rest is really just a theory, a Theory with a lot of evident OfCourse, which I will disclose with you in the near future, so don't forget to press the subscribe button to see the rest.

I will keep quiet for now until the secret is revealed. In the meantime, I would like to thank you for reading my story until the very end. It is much appreciated. come again! Until next time!

More stories from Queen anonymous and writers in Horror and other communities.