by Michael Z. Atrata 5 months ago in fiction

A Tale of Abandonment 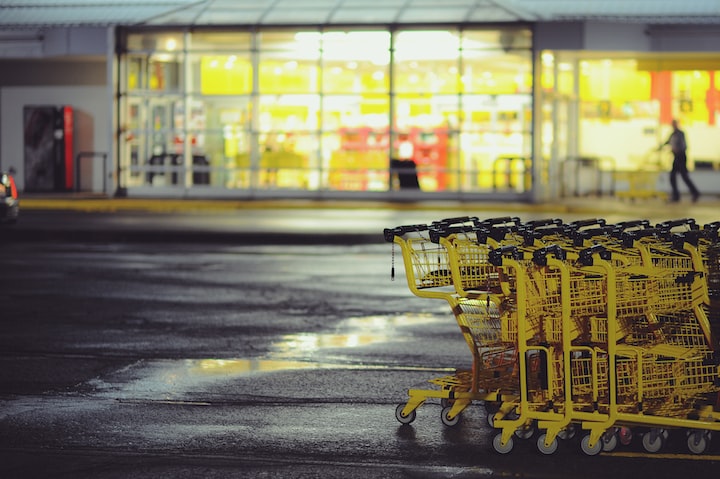 Photo by Clark Young on Unsplash

Mason worked at the market since he was old enough to get a job, since he was sixteen. Last year, the autumn after he graduated high school, he requested the night shift. He’s worked it for about eighteen months, refusing any requests to work any other shift, and refused to work past five A.M., especially in the summer.

He’s twenty now, actually twenty. Not twenty years in the blood, as he’s been calling it, but his body was born from his mother twenty years ago. He was born to the blood, again his term, just over two years ago, the week before he requested the shift change. It worked out, he tells himself, the night shift gets a dollar more per hour.

It’s been a nightmare. Other than mopping the floors of the near empty store and helping his co-workers, watching doctors getting off shift or construction guys working night projects by snacks he sees nobody, other than his victims. Nights off he wanders the streets, whether it be hot summer nights or frigid winter ones with snow plowed into small mountains. He liked those nights, the snow made is especially bright, almost daylight to his extra keen eyes.

He wanted to die. He thought about it. Sometimes he'd stand in the parking lot of his building, looking at the blue-black sky, crying. He might live five hundred years but he lost everything. He’ll never have a career; he wanted to be a pilot. He’ll never have a family, he’ll never travel, and he’ll never again hang with his friends who stopped calling him six months ago. He’ll never be anything but a creature trying to survive and knowing the futility of it.

He’ll have nothing but darkness and blood.

So he’ll wait for the sun.

Every new instinct made him tired and irritable in the day, blazing with energy and curiosity at night, but he needed to work to pay rent. A waste of existence, a waste or immortality.

So he’d wait for the sun, but when the orange blaze at the edge of the world began to eat the black that’s all he could stand. It was like acid on his skin, like his face had been ripped off and his skull exposed to the air.

He ran with unnatural speed back into his apartment.

He was lucky, the bathroom had no windows, permanent midnight in there.

He slept in a bathroom, a small bathroom, on the floor.

January, a full moon on his night off. He stood looking up at it. Maybe this reflected light will acclimate me. It does tingle. Maybe after standing here all night I’ll be able to stand the first rays until they are strong enough to vaporize me.

Mason didn’t actually know what would happen, but the pain he feels by just the hint of day can’t be a harbinger of good things.

He lowered his head and wept. He hasn’t the courage, not now.

The hallway was warm, Mason didn’t’ like that. He walked quickly to his chilled apartment. He kept it cold. He liked the cold. In he went and the thin cool air danced over his face. For a second in what could be centuries he felt good.

Mason’s blood ran colder than it already was. That voice was the last he heard as a human. The Man, or whatever they were supposed to call themselves, sat on the sofa. He appeared fifty, mostly gray hair and the beginnings of lines and wrinkles. But Mason knew he was much older. He never said how old, but just his mannerisms, his presence, called for a different time.

Mason closed the door behind him and tossed his keys on the table. “Hi Robert.”

A part of Mason’s mind laughed but as the impulse raced to his mouth it fizzled out.

“I brought you something,” Robert said and gestured to the floor by his feet.

Mason didn’t even notice the girl, about his age, curled up in a ball, looking up at the two Men (?) and shivering.

Mason leaned against the kitchen counter. “It’s been a year. More.”

Robert nodded. “I’m sure you know we are solitary by nature...”

Robert looked into Mason, who looked back without fear or shame. “We are solitary by nature,” Robert continued. “But there are rumblings out there. Whispers. A new one that is very powerful. Not powerful for a new one, just... powerful. And evil."

Mason glanced at the girl.

“I know how that sounds." Robert stroked the girl's hair. "This is not evil, but nature. This new one, I’ve heard, is not solitary. She is garnering followers.”

Robert shrugged. “That is part of the danger. Anyway, I’ve come to tell you that I’m not sure when we’ll see each other again. If we ever will.”

Mason began tapping his finger on the counter. “Even after you made me you were never around. For months just in and out. Then you were just gone. You left me, I assumed for good. And now, you come back to tell me you’re leaving for good.”

Robert looked down at the girl. “Do you know why I made you, Mason?”

“Probably because I remind you of your son or some bullshit?”

“Yes!” Robert smiled. “I was in the Great War, a soldier of France.”

Robert laughed. “Well, I haven’t been French in a very long time. You know what the worst part was, of the war? Not the million shells exploding every day, non stop. Not the specter of death. Death was welcome. The worst part was that it was life, and we grew used to that life. We lived literally in a pit.”

“Yes. A long pit, miles long, with hundreds of men. All eating and breathing and sweating and pissing and shitting...for years. Unmoving. We didn’t even fire our weapons all that much. It was all shelling. All day and all night...for years. Mason, a deafening explosion every half a second for days on end, explosions so constant that they became the silence. I still can’t get over it after all these years even as I am.”

Mason took cigarettes out of a cupboard and lit one.

Robert laughed. “In the War there was a concept called Third Light. At night, a man lit a match and two men could safely light their cigarettes. A third was playing wit fate. The striking of the match for the first light alerted the enemy sniper, the second light gave him time to aim, and by the third light he fired. Maybe he hit that third man, maybe not.”

Robert shook his head. “Then the Germans released the gas. You could see it creeping across the battlefield when the wind was right; a greenish phantom moving through the fences and wires. Over the black ground under the gray sky, it almost looked like a Van Gogh. Then it got to us.”

Robert closed his eyes, the flaps of his nose undulated.

“I smelled this sweet spicy odor, and I began to cough. Fortunately I was near the edge of a gas cloud, just enough room to get out of its path. But I heard men further in the trench cough and gurgle, gasping...screaming. Several jumped out of the trench only to be shot or obliterated by a shell. Pink mist added to the palette. Years like that, Mason, but I lived.”

“And came home to a dead son?” Mason blew out smoke.

“No! Henri’ was a happy healthy four year old when I got home. Those years after the war were a paradise for me. I was a fromager.”

“A cheese merchant. With a loving wife and a beautiful son.”

A shadow moved over Robert’s face.

“Fifteen. Influenza. I’d die a thousand deaths, fight that war forever to have him back. Or even to ease his suffering. He died so slowly, that grief was a thousand wars...”

“I don’t care!” Mason bellowed, his face screwed in agony.

The girl whimpered, the first sound she made but for her shallow breathing.

Robert’s eyes were wide and angry.

“I don’t care what happened to you a fucking century ago! You use me to feel better, then leave me? YOU LEFT ME! Alone! I’m an all-powerful immortal! I work for minimum wage! At night! I drink homeless people and old ladies! I have to take the bus! I sleep in the bathroom under a blanket! I don’t even have INERNET! Look at me! Look what you did to me! Now you’re gonna leave again! Fuck you! Fuck you!”

Mason collapsed to his knees, crying. Robert rose and walked to the weeping fledgling. He reached out to touch his head, but couldn’t.

Mason grabbed Robert’s hand and hugged it and leaned against Robert’s leg.

“You’re right, Mason. I shouldn’t have made you. I should have just drunk you, let you have peace. You weren’t meant to be one of us. I’m sorry.”

Robert pulled away from his blood son and left him alone in the apartment with the girl.

Mason looked over to the girl, their eyes level with each other. He rose and let out a frustrated scream. The girl screamed. Mason opened his mouth wide, revealing fangs. He rushed the girl and clamped his mouth over her throat.

The girl lay on the floor in front of the couch. Her eyes fluttered and she took a quick and violent breath and came to consciousness. She sat up and saw Mason staring out the window. He looked over at her.

She slid up to sit on the couch and looked hard at the room. She looked at her own hands and body; she felt different, she saw things differently.

“You fought hard,” Mason continued. “Robert said it takes two. The victim must want it deep inside. I don’t know. I don’t think I ever wanted it.”

“I’m...?” she couldn’t get it out but Mason knew the question. What else could she possible ask?

“Yes.” He turned back towards the window. “For a few more minutes.”

She got up and joined Mason at the window. To people that sky was black, but Mason and the girl could see the light edge in the east. Her head snapped over to him, fear taking over her face and body.

“I didn’t want to go alone,” he explained, still looking at the sky. “I think that was the real problem, going alone. I was always alone.”

She started crying. Mason turned to her and took her face in his hands. “It’s OK. Don’t be afraid. A few hours ago you didn’t think we were real. Who knows what’s next? But you won’t be alone. What’s your name?”

He smiled and turned back to the window. “Almost time.”

The edge of the world grew orange.

“You said you want it, deep inside.”

“You gave this to me, now you want to take it away?” she shrieked.

“You should have been dead an hour ago,” Mason responded casually.

Amelia winced; Mason steeled himself against the pain as the sky grew lighter.

With unnatural speed and strength Amelia grabbed Mason’s throat and began to crush it. He ripped her hand off his neck and collapsed.

Amelia ran toward the bathroom and slammed the door.

“No!” Mason croaked, still reeling from her attack.

He jumped up to run after her but light filled the room. “No!”

Ten hours later the world was again dark. The bathroom door cracked open, and Amelia stepped out. Mason was nowhere to be seen.

Amelia walked to the window and looked outside, dark blue with bright jewels decorating the sky.

She left the apartment.