The Winchester Mystery House and Other Mirrors

by kit vaillancourt 12 months ago in paranormal

She haunted the halls and her own head in equal measure. 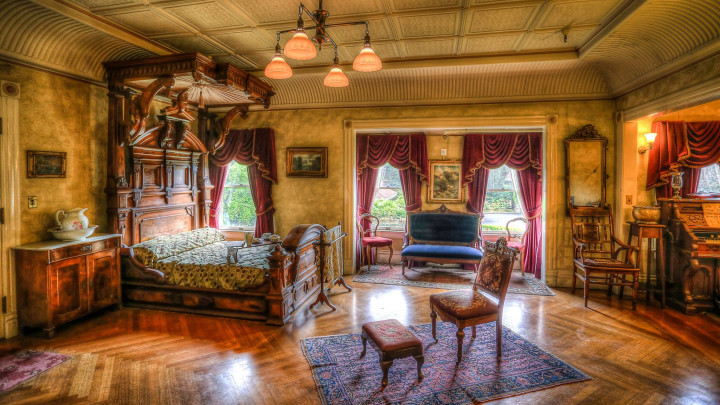 One of the house's 40 bedrooms, specifically the one where Sarah died.

“She herself is a haunted house. She does not possess herself; her ancestors sometimes come and peer out of the windows of her eyes and that is very frightening.”—Angela Carter, The Bloody Chamber

Before I turned was 16, I had gone to a dozen funerals. When asked to present a fun fact about myself that is the one I give. It isn’t perfect and is probably half true at best, but sometimes that's all I can ask for.

Not all of them were funerals, some were wakes, some were visitations. Most of the people whose funerals they were, were not dearly departed loved ones but rather people my parents knew and made me tag along with because I had nowhere else to go. It’s an amusing visual: Me decked out in bright colours because I didn’t own any black clothes, sneaking through hallways and unlocked doors, unafraid of what I would find. One year at vacation bible camp, the church we operated out of doubled as a funeral parlour. I was the only one brave enough to venture inside after we were told not to. Maybe I wanted to find something horrible and tell everyone about it. Maybe I just needed reassurance that there was nothing for me to fear.

My Nana told me about her childhood. How her house backed onto a cemetery, and she and her sisters would picnic among the graves, taking ribbons from bouquets of wilted flowers to braid into their hair. When my grandfather, who I was too young to know, died, my mother and I took walks down to the cemetery on hot summer nights and visit him. When my other set of grandparents died, one right after another a year apart, they were set side by side in an old mausoleum on the other side of town. The lights are never on, murals of angels and heaven decorate the walls, everything is stark, marble, and extremely Catholic. I learned to drive on the extensive surrounding grounds because the only people I was in danger of hitting were already dead. 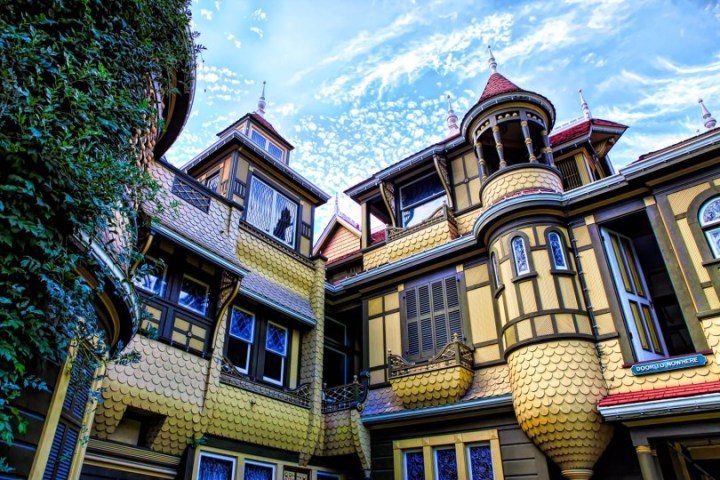 Part of the house's exterior, featuring the famed 'door to nowhere.'(Image Courtesy of Ancestral Findings)

When I tell people I’m desensitized to death, it’s not that I don’t care; it’s that I’ve grown up with it like a second skin. There was a point in my life where I went to funerals more frequently than I went to church.

I never cared for ghost stories as a child. A lifetime of skittishness and tendency for nightmares, one of which would develop into an adolescent anxiety disorder, the other of which I’ve never quite freed myself from, made me sensitive to anything the slightest bit frightening. While ghost stories were never my cup of tea, stories about ghosts, an entirely different category I can assure you, enraptured me. I spent hours glued to the TV watching programs on supernatural phenomena and unexplained mysteries, checked out the same books from the library a dozen times each. Many of these stories have been stored away in expertly categorized sections of my brain, rainy day fun facts I can pull out at parties.

It’s probably cliché to say that one story’s been haunting me for a decade. 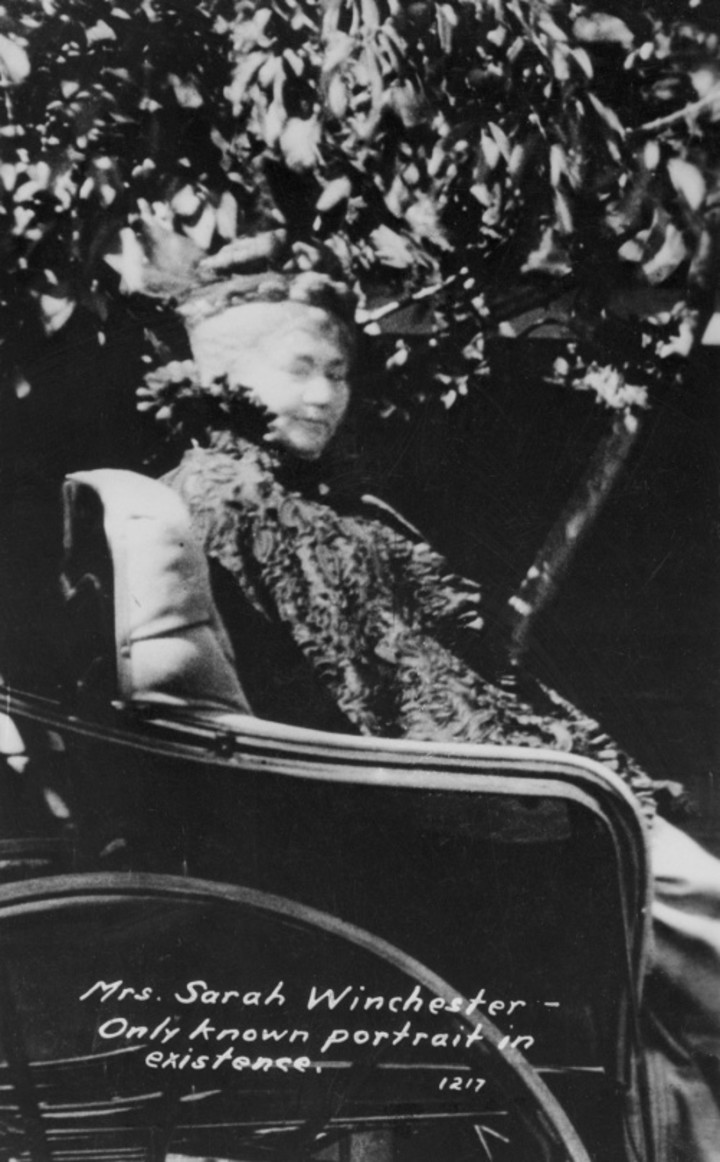 When she married into a famous family, Sarah Lockwood Pardee had no idea what she was getting herself into. The heiress to the Winchester Repeating Arms Company, she would be granted a fortune. You know the Winchester rifle. "The gun that won the west," the one John Wayne immortalized in westerns, the one that bled a continent dry. But Sarah didn't think of the casualties, she dreamt of a family, of marriage and motherhood and nothing more. The only child she had was a baby girl named Annie who lived not even long enough to be baptized. When her husband too, was ripped away from her, that’s when Sarah went a little mad. She communed with mediums, searched for truth everywhere, begged for an explanation as to what she did to deserve this. In Boston, she met with a psychic who channelled her husband, William; he told her to run. He told her that the victims of the Winchester rifle, all those screaming souls stuck in limbo, were coming for her.

Like so many before her, she went west. Sarah ran to San Jose and purchased an old farmhouse. For 38 years she built herself a home to confuse ghosts. With her inheritance, she hired workers to build around the clock every day until her death. 38 years of building. 38 years of running. The mansion swelled as it grew; overflowed with rooms that could only be found a certain way, doors opening to sheer drops on the side of the house, corridors with no exits. To confuse the spirits, she fashioned stairways with no destinations, slept in a new bedroom every night, held seances to try and get them to leave her alone. The blood of soldiers she never met permanently stained her hands as she walked like Lady Macbeth across the battlements of her house looking for an exit. She scattered an unlucky number throughout her home; 13 candles in the chandeliers, 13 panes of glass in the window in the 13th bathroom, her will divided into 13 sections with her name signed 13 times, each one over and over again like a prayer to which nobody is listening.

Sarah, whose marriage turned her into a burial ground. Sarah, who was given a baby girl with matchstick ribs and a heart which would beat less than a month. Sarah, who herself became a banshee, a wailing woman who people could hear but never help. Sarah, whose endless reserves could buy all manner of earthly possessions but not the one thing she wanted: resurrection.

When the great San Francisco earthquake hit in 1906, San Jose got tremors, too. After the shaking finally stopped, Sarah emerged and ordered construction on that part of the house to be discontinued. The spirits, she surmised, were angry with her for spending too much time decorating and not enough atoning. Some things are better left unfinished. 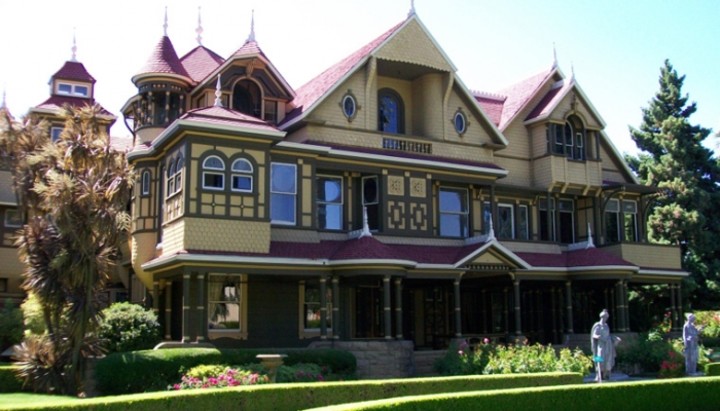 The house's facade (Courtesy of The Truth About Sarah Winchester)

Sarah became one of the ghosts she was hiding from. Lost in her own home, she haunted the halls and her own head in equal measure. The madwoman in her own attic.

I see myself in this story. Not in Sarah building a labyrinth to escape her grief, or perhaps to contain it, but in the house itself. Built to confuse ghosts but instead becoming a haven for them. The consumption of one woman by her own trauma. The house growing and growing. My ghosts never far behind me. My head a room with a dozen entrances but only a single exit, hidden behind a false wall. Memory like a seance; trying to get in touch with parts of myself which have been dead for years. I know how it feels to lead to nowhere, to circle around yourself avoiding the truth thinking it will shrink if you leave it to die when it really only gets bigger. It took a long time, longer than I’d care to admit, to recognize that the ghosts I was trying to suffocate were parts of myself. When you hear the word "ghost" you think of sheets and spectres, you don't assume they come with teeth.

I walk my own battlements. I tiptoe down to the basement, where my grandparents used to stay, where my beloved grandmother managed to tell me one last story before the ambulance showed up. My own miniature Mystery House. I don’t like to stay there for long. It’s funny, I spent my formative years at countless funerals, but nobody ever taught me how to mourn. Perhaps they thought it would come naturally.

Sarah Winchester, who has become more of a patron saint to me than all the martyrs and mystics I grew up learning about, made her mourning an art. Maybe haunting is just another way of healing.

On a golden summer afternoon, I walk down to the cemetery where my grandfather is buried. It takes me time to find the grave marker, it’s been several years since I’ve looked for it. In the sticky heat and blinding light, I perch on the hill and watch the sunset over an endless illuminated stream of headlights. I sit, and I watch, and I count my ghosts.

Kit is a university student, old movie fanatic, lapsed theatre kid, and possibly three raccoons in a trenchcoat. They write about books, movies, and general queer things. Follow them on Instagram or twitter @kitnotmarlowe.

See all posts by kit vaillancourt →