'The Walking Dead': Who Will Inherit Carl's Comic Book Storyline?

by Kristy Anderson 2 years ago in tv review

Comic Carl had a lot to do going forward.

Fans of The Walking Dead received a shock in Season 8's mid-season finale, "How It's Gotta Be," when it was revealed that Carl Grimes, the son of series protagonist Rick Grimes, had been bitten in the torso by a Walker. Some fans are clinging to the hope that Carl will miraculously survive, it doesn't look good. A bite in the area that Carl's is has always been a death sentence.

While Carl's likely demise will make for unforgettable, heartbreaking viewing, it leaves the show's writers with a rather significant problem going forward. In the comics on which The Walking Dead is based, Carl Grimes is still very much alive, and has an important role to play. The Comic's creator, Robert Kirkman, has even stated that Rick Grimes could die at any time, as Carl was now capable of carrying the story. How can the show be expected to adapt upcoming comic story arcs that featured Carl at the centre, without Carl? There are a few possibilities.

During her early appearances in The Walking Dead, Enid, an orphaned teenager who arrived at Alexandria a short while before Rick and the gang, was a rather mysterious figure. Many speculated that she was a spy for the Wolves or the Saviours. Most of this speculation faded as Enid began to bond with Carl, Glenn, and later Maggie. It is now generally accepted that Enid has become a slightly more bad-ass version of Sophia, who is still alive in the comics.

The problem is that, after the comic's time jump, Sophia doesn't have a whole lot to do aside from babysitting Maggie's son, Hershel. An important job, yes, but for a character like Enid, who has pretty much always been ready to take action when needed, this doesn't really seem to fit. If Enid were the one to inherit Carl's story lines, however she would have plenty to do, including rising to an almost co-leadership position at the Hilltop alongside Maggie, and embarking upon a Romeo &amp; Juliet-esque relationship with the child of the leader of the series' next big villains, The Whisperers.

Enid is probably the most likely candidate to take on some of Carl's biggest future stories. She is close to the same age, already lives at Hilltop, and spends a great deal of her time at Maggie's side. It is possible that Maggie will one day begin grooming Enid for leadership, as Deanna and Rick had done for her. Enid has long been capable of surviving on her own, and post time-jump, would likely have plenty of opportunities to leave the safety of Hilltop and encounter the Whisperers.

Henry, an orphaned boy living at The Kingdom, was first introduced in season seven. He was usually seen in the care of his older brother, Benjamin, though both boys were watched over by King Ezekiel, who had known their Father. Since Benjamin's death at the hands of The Saviors, Henry has expressed a desire to avenge him, often seen training with his brother's staff. Henry was last seen being returned to The Kingdom by an annoyed Carol after he had taken an unsupervised trip into the woods to fight real Walkers. While he was not seen during the Saviors' attack on The Kingdom, he most likely escaped with the other residents after Ezekiel's epic distraction. 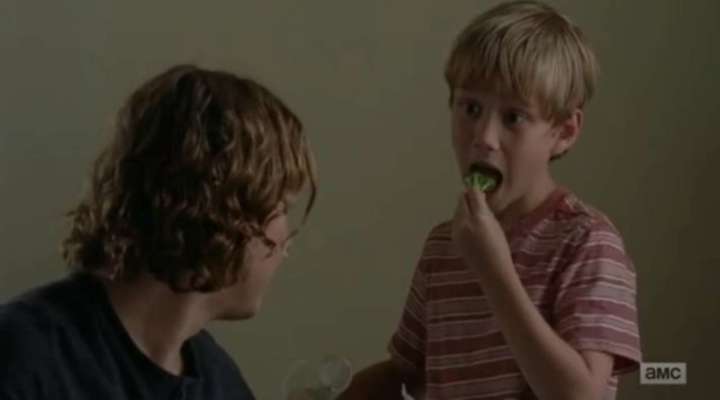 As most fans probably know, Carl, thanks to the unavoidable growth of actor Chandler Riggs, is quite a bit older in the show than he was during the 'All Out War' arc in the comics. Where the comics have Carl at about age eleven during the war, TV's Carl is approaching adulthood. Following the comics time-jump, a great deal of Carl's story focuses on the man he is becoming having grown up in the Apocalypse, where as on the show, we are already seeing the kind of man he has become.

Henry is currently around the age that Carl was at this point in the comics, so after the time-jump, he will be close to the age that the comics version of Carl is now (somewhere between 13 and 16.) This would make him a believable age to take on some of Carl's future stories, such as moving away from home to become an apprentice blacksmith.

One of only four (soon to be three) survivors from the original Atlanta camp, Daryl has risen up throughout the seasons to become one of The Walking Dead's most popular characters. With no counterpart in the comics, Daryl is not beholden to any fan expectations for upcoming storylines, leaving him as one of the show's few remaining wildcards.

As he has no clear path to follow, many fans are expecting that Daryl will take on, if not all of Carl's stories, at least some of them. In particular, the story of Carl's romance with Lydia, a Whisperer. Of all Carl's future storylines, this would be the one that could be most easily adapted for another character. All that would need to be done is to age Lydia up from a teenager to a woman closer to Daryl's age.

Maybe All of Them

The most likely solution, considering how The Walking Dead has dealt with similar situations in the past, is that Carl's storylines will be split up among multiple characters. For example, Michonne has inherited the bulk of Andrea's comic book storyline, but her role as the group's best sniper was taken by Sasha, and what is currently happening to Carl is eerily similar to Andrea's ultimate fate. It is very possible that Enid will run Hilltop at Maggie's side, Henry will train as a blacksmith, and Daryl could become the Romeo to Lydia's Juliet.

This is all assuming that Carl does in fact die from his bite. Many fans are not willing to give up hope just yet. We will find out for sure when The Walking Dead returns for the second half of its eighth season in February, 2018.