by Madison Wheatley about a year ago in fiction
Report Story

When two strangers meet in the smoking-room of a luxury airship, they discover they share a disturbing connection. 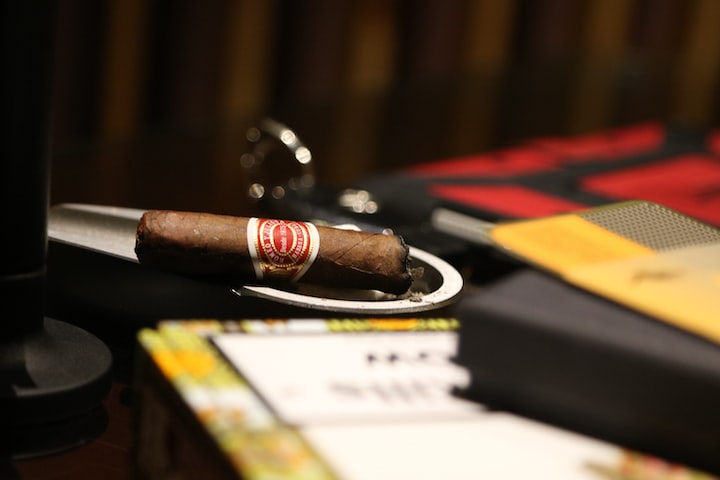 Photo by Nguyen Pham on Unsplash

Jonah Gray stumbled into The Prodigy's pressurized smoking room, legs quivering, heart racing. Sinking into a plush seat, he leaned his head back and tried to regulate his breathing. Tried to shake off the terror that seemed to seep deep into his bones.

After a moment, Jonah looked up and examined his surroundings. The man frowned. After the night he’d had, he’d hoped to have the room to himself. No such luck, though. A young blonde sat in the booth across the room, nursing a cigarette through a thin, tapering cigarette holder. She regarded Jonah with curiosity, and he quickly averted his gaze.

Taking out his pocket watch, Jonah's eyes widened. It was well past three a.m., yet he hadn't gotten a wink of sleep. Despite his exhaustion, he couldn’t relax. Not after what he had seen.

And definitely not with this broad staring at me, he thought, glaring at the woman.

“Sorry.” She shook her head. “You just seem… familiar.”

Ignoring her, Jonah produced a glass bottle and a cigar tin from a robe pocket. He dropped more three sleeping pills into his trembling hand and swallowed them. Lighting a cigar, he closed his eyes and took a deep drag.

“Are you all right?” the woman asked, cocking her head slightly. “You look like you’ve seen a ghost.”

The woman returned to her cigarette. Now and then she stole glances at the nervous man, who kept staring through the glass door.

After a few minutes, there was a sound of rain against fabric overhead. The woman shuddered, silently praying that the balloon wouldn't fly into a storm.

Jonah ignored her, tapping his cigar over the ashtray.

“I didn’t think I was scared of heights,” the woman continued. “But being this high up, with only a shell of aluminum and fabric holding us together... it’s eerie, isn’t it? Hell, we can’t even smoke freely, what with the hydrogen in the balloon.”

The woman stood and crossed the room. “Caroline Whitney,” she said, extending a hand.

Jonah hesitated, then shook her hand briefly. Her grip was stronger than he expected. “Robert Cross,” he said, conjuring up one of his many aliases.

She sat across from him, fidgeting with her cigarette holder. “Sorry for being such a wet blanket,” she said. “You’d think I’d be thrilled to be on The Prodigy, right? What with the parties and the music and all. Not to mention the thrill of actually flying.” She bit her lip, looking down. “But I can’t seem to shake the feeling that something terrible is going to happen.”

Jonah scoffed. “That makes me feel much better, thank you.”

Silence fell between the smokers. After a long moment, Jonah jolted suddenly, nearly dropping his cigar as he stared through the glass door.

“What’s wrong?” Caroline frowned, looking through the door for whatever had startled him. All she could see was the night guard, who appeared to be sleeping at his post.

Jonah took a deep breath, then spoke: “You said you have a bad feeling… What did you mean by that?”

Caroline tapped her cigarette over the ashtray. “Call me crazy, but ever since I was little, I’ve had these premonitions.” She put her free hand over her chest. “It’s this twisting feeling, right here, above my heart. It doesn’t go away until whatever is supposed to happen, happens.”

Jonah nodded, his gaze shifting toward the door. “And it really works?”

A shadow crossed Caroline’s expression. “More often than not. First time was before my grandpa killed himself. Most recently…” She paused, drumming her nails against the table. “It was the night my brother and his family were killed by Jonah the Whale and his crew.”

The color drained from Jonah’s face.

“It was almost a month ago,” she continued, blinking back tears. “I don’t know what Bradley, my brother, did to anger those thugs. But they… they torched the whole house, with everyone inside.”

Jonah’s skin burned, remembering the heat of the fire.

“My nephew,” Caroline continued, her voice cracking. She produced a white handkerchief and began to dab at her eyes. “He was only seven years old.” Caroline’s bloodshot eyes shone with furious tears. She stopped wiping her eyes, tightening an angry fist around the handkerchief. “What kind of monster murders a seven-year-old?”

In his shock, Jonah had forgotten to check the door. When he saw the phantom figure outside the glass, Jonah cursed, nearly dropping his cigar as he tumbled to the ground.

Jonah pointed a tremulous finger toward the door, where a small, translucent figure peered in. He had messy hair and piercing blue eyes. He clutched a stuffed dog under one scrawny arm, pressing his free hand against the glass.

“It won’t stop following me!”

Caroline frowned at the door. “There’s nothing there!”

Suddenly, the boy was inside the smoking room. The sickening smell of burning flesh filled the air, making Jonah queasy.

Caroline’s nose twitched in disgust. She looked around for the source of the smell.

The boy drifted toward Caroline, piercing eyes glaring at the cowering Jonah. “Auntie?” the boy said.

Caroline looked down, eyes following the voice.“I heard something...”

Jonah stood and backed away from her, creeping toward the door. He dropped his cigar and stamped it out quickly, preparing to run.

Caroline knelt down, staring at Jonah, who watched in horror as the ghost child held up a hand and whispered something in Caroline’s ear.

Jonah tried to push the door open, but someone had locked it. He pounded on the glass to alert the sleeping guard.

The guard roused quickly and tried to help, but the door wouldn’t budge.

Jonah turned to face Caroline, whose face was crimson with rage.

With a wild cry, Caroline lunged at Jonah, wielding the cigarette holder like a dagger. Jonah dodged her, but stumbled, slamming his head hard against a table. He fell, seeing stars, and tried to crawl away, but the floor seemed to tip beneath him.

The boy stood over Jonah, still clutching his stuffed dog as he watched the scene. Jonah couldn’t look away. Couldn’t move. Jonah lay paralyzed beneath those bright eyes while the litany of his own sins played through his mind like some savage film reel.

As the gangster lay choking on his own blood, the murderous haze cleared from Caroline’s mind. The gurgling sounds Jonah made blended grotesquely with the night guard’s horrified screams and the torrent of rain overhead. Caroline leaned against the wall for support, trying not to vomit.

But her chest felt much better.

Madison Wheatley is a poet and fiction writer in Jackson, Tenn., where she works as a residential youth counselor. She is the author of the paranormal thriller AMBROSIA and several short stories and poems.

More stories from Madison Wheatley and writers in Horror and other communities.