by Aletze Castellanos 2 months ago in slasher
Report Story 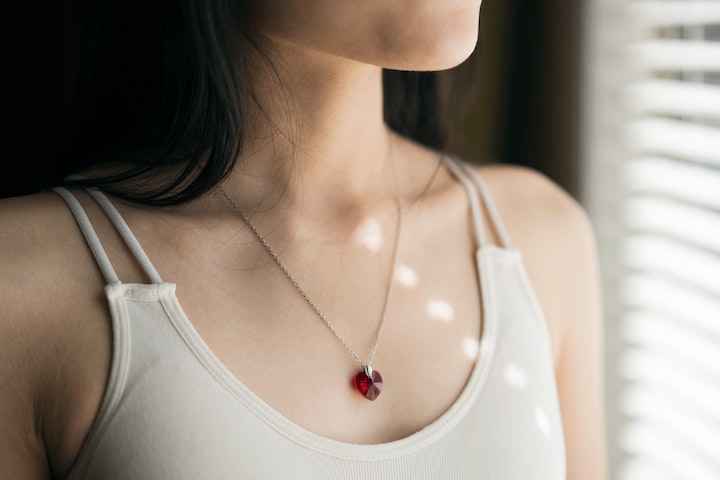 Photo by Pat Kwon on Unsplash

Kendall took a bite from the apple with dripping caramel, the apple and the caramel giving her a bittersweet taste ,that she finds endearing.

Then startled by a bright light above her, looked up as each carnival light began to turn on, one by one , illumaniting the rides and prize booths and the people, laughing and smiling on them, she smiled at the sight.

A longing deep inside her then replaced her joy as she saw a young couple , maybe, a few years younger than her, passed by holding hands,laughing and joking, eating cotton candy from each other's bags.

Kendall sighs and began to walk again , remembering what her therapist has told her, a step forward is better than a few steps backwards and she agrees thinking about him, isn't gonna do her any good, she sighs again...then stops.

She stepped on something.

Kendall took a step back , there in the ground was a glint of red, illuminating, somehow calling to her, she leans down and starts digging around the dirt.

She grabs it and hold its in the light...it was a necklace with a big dark red ruby inside it with a rusty metal around the ruby with what Kendall describes as latin encrave on it.

In her full surprise, the ruby begans to glow...it was beautiful..it was calling out to her..saying her name...telling her to give in...she looks up...dropping her caramel apple,farther away from anyone,behind the shadows of the woods and in the darkness from the light of the carnival,a man with a red devil mask stood, he signalled her, 'come, my darling,' it said in her head.

Kendall obliged, finally, she wasn't gonna be alone anymore, finally , she will be happy with the person she---

"Kendall," she stopped in her tracks, "Kendall, where are you going?"

She turns around, her friend was running after her , catching her breathe , she looks up at Kendall.

Kendall looked around her , how did she got there? Why was she near the woods?

"Hello ,Kendall ",a hand was in front of her, swinging up and down , in her view of sight.

"Are you okay?" Tanya looked concerned.

Tanya crossed her arms, not convinced about it.

Katie, Olly, Mari and Connor ran towards them, also trying to catch their breathes.

"I am not sure, Connor, "Mari started, Katie rolled her eyes and Olly groaned, "here we go again". "Come on, guys , people died there, isn't it like disrespectful to, you know ,be in a crime scene where fucking people died in really gruesome ways", Mari added.

"Mari, honey, you need to stop being such a killjoy, like seriously," Katie took out a cig and light it, a huff of smoke leaving her mouth as she puffs, "people died, so what, people die everyday and Havenfort , Texas , in particular , is no damn exception".

"I am just being realistic, I don't know why you find it so offensive".

"Not a realist, just a bitch, honestly".

Tanya and Katie started arguing , Kendall sighed, this two have always been in each other throats since Elementary School because of their opposing point of views ,Tanya being an optimistic and the mother of the group and Katie being the narcissist and rebel , now , as adults ,it seems that never went away.

"Guys, come on", Connor stepped in between them, "we are here as friends , not enemies or fiends, we are here to be with each other after a year in college and stress, we came here because of a promise, remember?"

Everyone got quiet, nobody has ever mentioned Leo in awhile.

Kendall's one and only love.

She remembers that day...

Kendall was next to him, holding hands, singing together to As Long As You Love Me from Backstreet Boys, in the radio, laughing as they got some words wrong and joking around.

Then it happened...they were hit by a semi-truck , .08 BAC, she found out later that he was drunk and didn't saw their car.

Kendall remember at first not able to move , her whole body hurt, she turned her head, slowly,her eyes widen, as there was a lot of blood running down in the steering wheel , Leo's face was smashed on it.

She moved him away from the steering wheel and screamed.

"Hey, let her breathe, step away, everyone", she snapped back to reality, Kendall was in the ground, next to her , her breathing was ragged and shallow as she breathing heavily.

Her friends were surrounding her, looking at her with concerned.

"Here", Mari gives Kendall a water bottle from her backpack, Kendall took it and said a quick thank you as she unscrews the water bottle and takes a sip.

Tanya and Katie helped her up," are you okay?"

"We know, how much Leo meant to you, what he meant to all of us, are you sure you want to go?" , Connor asked, softly holding her shoulders.

Hello there , I am Aletze , I am a college student , a cat mom, an older sister, a big Marvel, FNAF, Hazbin Hotel , Helluva Boss , etc fan.

I love to write creepy stories, romance stories, theories and what is going on the world.

More stories from Aletze Castellanos and writers in Horror and other communities.