The Gray Man of Pawley's Island

by Shelby Yarchin about a year ago in urban legend

Sort of like Casper the Friendly Ghost, but with a Little More Wind

As humans, we rely on warning signs. If you’re driving down the street and see a red octagon you know that you need to stop. If you see clouds forming against a clear blue sky, it’s probably time to pull your lawn chair in from the beach. And if you’re in Egypt and start to hear an incessant buzzing beyond proportions then you know there are nine more plagues to follow.

But warning signs don’t always start with rain clouds filled with blood, instead, it could start with something as slight as a shift in barometric pressure.

Past the murky inlets and the clubs that play music at deafening volumes, there is a little town in South Carolina called Pawleys island where people go to retire and hit off a few tees.

It’s a quaint little town that has a fair share of bakeries and easy access to the beach. But it also carries a legend that dates back to 1822. 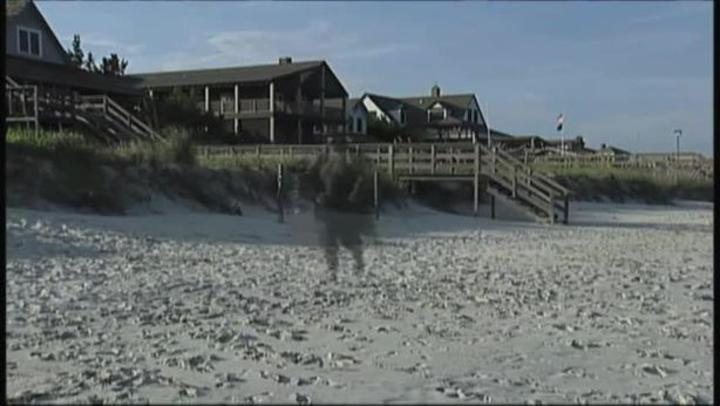 South Carolina is no stranger to catastrophic storms. From Hurricane Hazel in 1954 all the way to Florence that touched the shore this past September. They bring strong winds and impossible flooding, but they also bring an appearance from the infamous Gray Man.

The legend is simple: the Gray Man is there to warn residents of impending storms. Often seen on the beaches if you heed his warning and leave your property will be safe, however, if you stay, you’ll be left with nothing.

This all started with a traveler on his way home from visiting his fiance in Charleston South Carolina. The inlet was filled to the brink with pluff mud, a thicker substance that’s a bit like quick-sand when wet, getting trapped in nearly fatal and proved to be so when it came to the man and his horse.

Like most legends, people claim he’s still looking for the girl that he loves, but most articles actually dispute his identity altogether. Some have dubbed him with the name Percival Pawley, while others are faithfully convinced that it’s Blackbeard himself, Edward Teach.

The legend first appears in a book written by Julian Steverson Bolick. It was published in 1956 and since then the Gray Man has made multiple appearances in national news and literature. The most famous being an interview done for the series Unsolved Mysteries by Jim and Clara Moore.

Most encounters are the same. A man in a long grey trench coat walking along the beach before wordlessly vanishing. There was one instance in the mid-1900s during a particularly bad storm where a young woman claimed the Gray Man appeared on a tree next to her porch. She ran inside to grab a friend and came out to find nothing.

Going back to the hurricanes, Percival has been noted to appear before some of South Carolina’s worse storms.

Here is where it gets a little weird: up until Hurricane Florence, every single sighting of the Gray Man has been left up to word of mouth and some really dodgy photography that could easily be Photoshopped.

But during the recent storm, paranormal investigators Jim and Billy McClency caught live footage of what people believe to be the Gray Man on what looks to be a pier. Their full paranormal analysis is done here. The video of the supposed sighting is above.

With that being said, I’m not completely convinced if that was the Gray Man or if it was just as easily Photoshopped as any picture could be. The video was actually taken along the shore of Kill Devil Hills in North Carolina, with the same MO as the Gray Man himself.

So, they might have a little bit of a ghost situation themselves, but this video can’t really be proven as the Gray Man or a sighting of such in my opinion. But when you google Gray Man, Hurricane Florence, it is the first thing to pop up.

However, there were actually a few people boasting about seeing the Gray Man right before the hurricane hit. Like this tweet from Rian Fontaine. 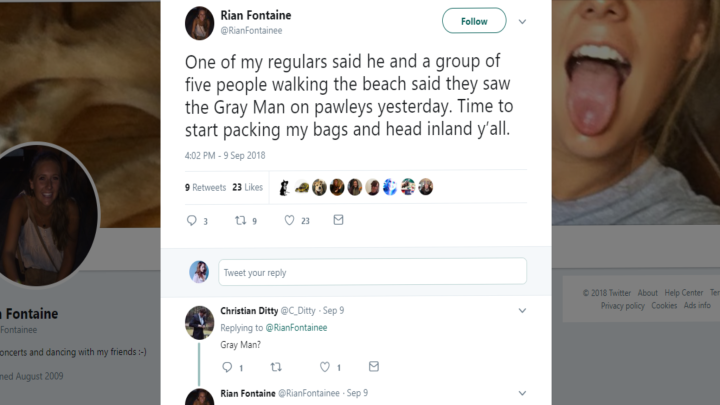 In short, I’m not really sure if I believe in the Gray Man or not, but either way, it’s a nice innocent legend that stands nearly 200 years later in South Carolina that seems to get people through the terrible storms that hit the shore.

My name is Shelby, but a lot of people generally call me S.

See all posts by Shelby Yarchin →