The ghost in the closet

by Lydia Bug 10 days ago in supernatural

a true story about my room as a teen 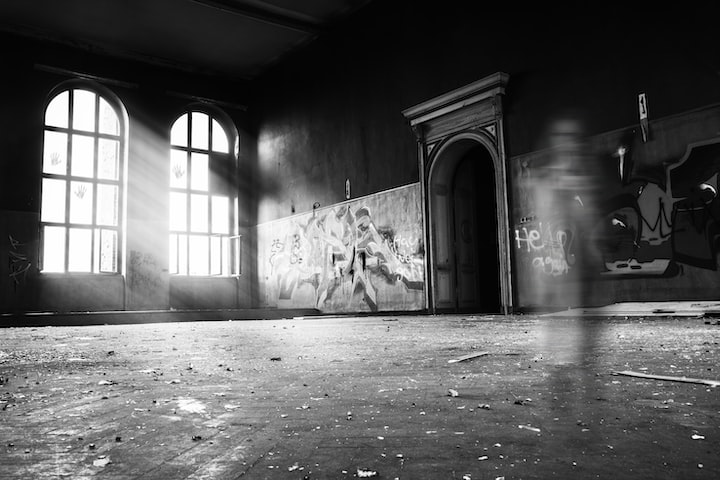 I was 17 when I decided ghosts were real. I sat in my large, cross shaped room that ended in three doors, one to my closet, one to my bathroom, and the last one leading to...well, nothing. The third door opened up into a wall. I was talking with my boyfriend as his words dissipated into garbled whispers. I was hyper fixated on the floor boards in my closet, why did some of them look as though they were sawed off to be shorter than the rest of the closet.

My curiosity was consuming me, a burning need to rip the wood up and discover whatever may be there. Still ignoring my boyfriend, I cautiously stood, feeling condemned to complete this task. "Grab me a hammer" my voice came out absently, foreign somehow. I dropped to my knees, hammer now in hand, and began prying up the dry, splintering wood. As the third board came up, I was all too aware of what was beckoning me, a simple wine bottle, empty, but my heart sunk as I saw three pilled up, nailed down boards beneath it, about as long as a toddler and covered in about a box of nails.

I felt my heart racing as I picked up the nearly ancient looking wine bottle reading 1855. What had happened here? I replaced the boards loosely, as I silently walked down the stairs, my boyfriend, Sell in tow. "Dad" my voice wafted down the stairs "dad?" I found him in the kitchen, where I placed the bottle on our dining table and began telling him about what we found "should I... tear up the other boards too? I think I'd need help" my head was cocked to the side, my gaze sharp and demanding of an answer.

"No, I don't think you should do that just yet...this thing is cool, huh?" My dad was amused and clearly a little drunk, but I trusted his intuition none the less. Disappointed I went to grab the bottle when dad stopped me, saying simply "I wanna look this up." I begrudgingly accepted this and went to go back to my room.

Several days had passed and Sell and I had noticed we were consistently tired as long as we were in my room, something new. We found ourselves sleeping multiple times a day, every day, leading to an ever building depressive state. We decided to go stay with a friend who was struggling with her addiction in the hopes of helping one another.

We found ourselves rather enjoying our time with her, but also noticed some strange happenings. As we walked we would see the shadows writhe and morph despite the source of the shadow being stagnant. If we noticed it and said aloud something along the lines of "There's something wrong with that shadow" the movement would immediately stop or jump to a different shadow. We attempted in vain to out run this being, before realizing it moved at the speed of light.

We didn't think much of it, until we were sleeping one night and we both woke in utter darkness, finding the corners were alive with movement. We were spooked and argued over who should go turn the light off, when my dad called.

"Lydia, I'm going to have to put that wine bottle back, something just choked me and wouldn't stop till I promised to put it back...so....yeah, leave it there." He sounded panicked enough for me to choose to hold my tongue about my current situation and I simply sat there in silence once he hung up. After about an hour the shadows subsided, seemingly falling asleep, in that moment, I too fell asleep.

We chose to go home after another two days only to find the soul sapping energy leech was still ever present in my room, something I needed to fix as soon as humanly possible. My belongings flung from the shelves, the nightmares I was used to having were now night terrors, and I could not eat. I gathered supplies, gathered information as I planned out an exorcism, I know, cliche.

On a Sunday filled with sunshine and farmers markets, I found my way to the nearest catholic church, requesting holy water for my ventures. The priest provided gladly, a large bottle of holy water, fearful for my life as I received it. I smiled broadly in an attempt to comfort him, which did not seem to work, but I left anyhow.

I performed the exorcism, smearing holy water around each entryway and window, asking the good ghost to stay, and the bad to leave. That night I found myself having a nightmare of a suited man, seemingly from the 40's, silhouetted, asking if he could say, exclaiming he only wished to protect me. I told him he could stay, however; not to hurt anyone. "I won't hurt anyone who doesn't deserve it, puppet"

I woke gasping, and he stayed in that house for the duration of time I lived there, he may still live there.

supernatural
Lydia Bug
Read next: I See You
Lydia Bug