by Tony Pabon 2 months ago in fiction
Report Story 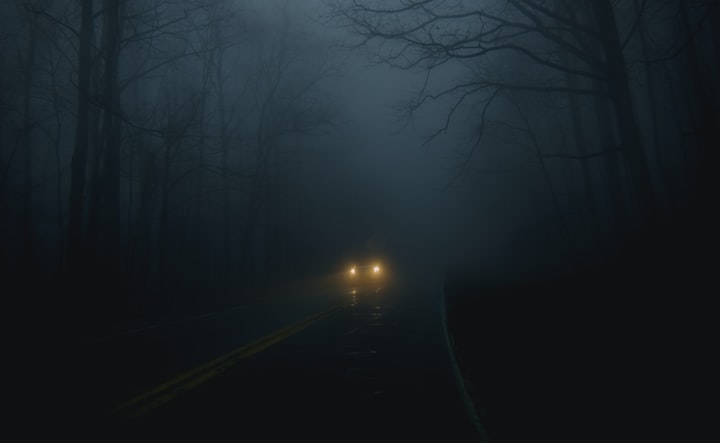 The snow was beating on the windshield of the car. Even with the wipers on the fastest setting Jack couldn’t see a thing. His GPS had taken him on a road he’d never been on before so he was driving slowly on the windy back road. The snow was picking up and he wanted to be home early to see his kids for the first Christmas they’d actually remember.

The road was starting to get icy and Jack's Toyota never did well in the snow. He saw headlights coming towards him and the driver must’ve had the same problems as him because he was halfway into Jack's lane. Jack moved farther over as close to the guardrail as he could.

“Get in your damn lane!” Jack shouted.

He gripped tighter on his steering wheel and leaned forward. The car drifted farther and farther until it was coming head-on towards Jack’s vehicle. Jack pulled the steering wheel to the left as hard as he could and began to slide sideways. Jack tensed up waiting to feel the weight of the car crashing in on him as he was sliding.

His vehicle came to a complete stop and he looked out both sides of the car and there wasn’t another vehicle in sight. He opened his door and got out to catch his breath. It was freezing outside but he had broken out into a sweat.

He looked around and there was no other tire tracks besides his own. He went to get back in his car and as he opened the door a truck came flying around the bend just ahead of him. Before he had a chance to react the truck slammed into the passenger side of his car throwing Jack into the car and the car rolling over the guardrail. Jack’s head slammed on the passenger window and everything went black.

“There’s no way there’s somebody in the damn car now let’s go.” A raspy voice said.

“I’m telling you, I can smell blood over there. What it’ll kill ya to check I’d hate to waste your damn time.” A woman said

Jack was fading in and out of consciousness. He could feel dried blood on his face and a sharp pain in his side and arm. He looked down and could see that his hand was facing the wrong way. He shut his eyes tight for a moment. He thought he could hear voices but still wasn’t sure if any of this was actually happening. He reached his good hand out to grab at the seat and an enormous amount of pain washed over him. He screamed and passed out again.

“Look his eyes keep opening I told you he ain’t dead” the woman’s voice said.

“Yeah but I’d bet he don’t make it much further look at ‘em. Looks no more good” the raspy voice said.

Jack opened his eyes and saw the two figures ahead of him. They were dragging him on a makeshift sled. He opened his mouth to talk but couldn’t find the energy to say anything. He grunted. The two didn’t hear him as they were arguing over if he was dead or alive.

I’m alive. I don’t know how. Please call my wife.

The pain in his side was getting worse and every bump they hit wasn’t helping anything. He looked down at his stomach and saw a tree limb poking out about 6 inches from his ribs.

The woman turned slightly and looked at Jack. Her face looked disfigured. Jack couldn’t tell if it was real or maybe he’d just lost to much blood. It was dark out he had to of been stuck in the car for hours. She turned back around and began arguing with the man again.

They have to hear me. I have to do something so they know I’m awake.

Jack began trying to roll back and forth. Finally he managed to get enough momentum to roll of the sled.

“Ahhhhh my God” he yelled out.

The man turned and looked at Jack with his head cocked like a dog.

He walked over to Jack. He was a bear of a man, at least 6 feet tall, shaggy hair and beard.

“My wife” Jack began to say.

“Ain’t here, bud. We’re gonna fix ya up and get ya where your going now shut up” he said.

The man lifted Jack up and dropped him on the sled from chest height. The pain overcame Jack again and he blacked out.

Criticism is welcome. I will release a new chapter once a week or sooner if it is well recieved. Thank you for your time!

Welcome to my mind. I've been writing for years. Just recently I've found the courage to show my work. I love horror so expect alot of spooky stories!

More stories from Tony Pabon and writers in Horror and other communities.