by AJ Cannizzaro 2 months ago in psychological
Report Story 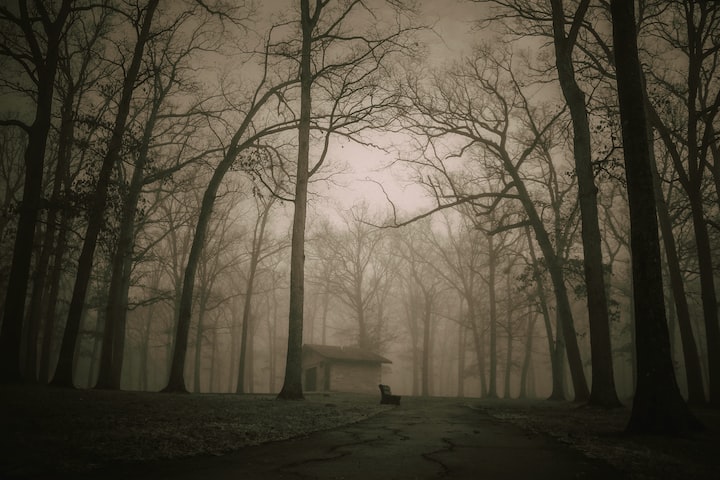 The cabin in the woods had been abandoned for years, but one night, a candle burned in the window. A sheer slip of white curtain that had been pushed to one side was flowing as though dancing in a breeze. It took a minute for my mind to register why that felt so wrong. As the clammy night air filled my lungs, I could feel the rhythm of my heart quicken. There was no breeze that night. The strong scent of pinesap was beginning to upset my empty stomach, and the strange stillness of the forest had my senses pressing to hear past the silence. “You don’t believe in ghosts,” I told myself.

Suddenly, an image flashed like lightning beyond the glass pane. It burned in my retina and when I closed my eyes, I could see it as clearly as I had in my nightmares. A short dangling noose. I had first seen it a week before my father died. Only then it was not empty. He was still fairly young and in good health, so his frozen lifeless face staring up from the casket a week later was unfathomable for everyone else. For me however, it was exactly as my mind had last seen it.

The second time, I woke up to the sound of my own screams. It was my daughter this time. “No! No! No!” I kept yelling as my feet kicked back the blankets and I ran to her room to check on her. My knees buckled under me when I saw the scattered abandoned blankets. When my husband found her cold limp body on the sidewalk below, it was too late. I didn’t leave my bed for a month after the funeral. How could I even tell anyone about the premonitions?

Hiking became a therapy for me over the past year. A reason to get out of bed and engage in life again. I never went alone. Sometimes with my husband, my son, or a friend we would discover new trails together. This one has become our favorite. Always a challenge, it has plenty of wildlife, and the same abandoned cabin that inspired daydreams of how I might restore it, if it were mine.

I never would have started so late on the trail nor hiked it alone, but I needed to get away. I was angry. The anger of betrayal numbed me from feeling anything else. It blinded me from fear of danger. Now, there I was. The hot night air, sticking to me. The silence of death surrounding me. My eyes glued to the burning candle and the faint darkness of the room beyond. Had I really seen that knotted hanging rope or had I imagined it.

My heart felt heavy in my chest as it pounded louder and louder. I was afraid to move, to even blink. Out of nowhere, the hair-raising screech of an owl broke the silence as it dashed past me, breaking my focus on the window. When my eyes found it again, an empty rocking chair had appeared in the dim room. I could feel my legs tingling. I was terrified but I couldn’t tear my eyes away.

In the candlelight the empty chair began rocking on its own. I wanted to scream but my tongue caught in my throat. The slow steady rhythm of the rocker was gaining in speed as the moments passed and my stomach was in knots. Then a flash of heat lightning lit up the forest around me and I could see that a thick heavy fog had set in and was rising from the ground around