by Blake Anglin 3 months ago in supernatural

From the journal of Ezra Baines 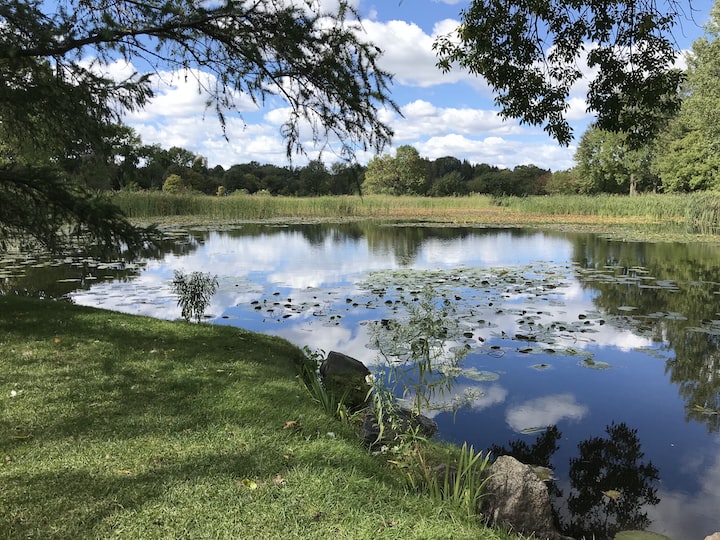 Photo by Goulet Isabelle on Unsplash

Laura and I got into a fight today. Got a little heated, which sucks because things have been really good lately. Or so I thought. She got mad because I don’t want to go to her mother’s place this weekend. Four hour drive just to hear backhanded insults and sleep in a shitty bed, no thanks. Laura said I could use the time to “engage” with Sean, whatever the hell that means. I just walked away, hopefully she’ll cool off up there. I guess I got the whole weekend to myself. What should I do?

Took a walk around the land, almost forgot how big it is. Haven’t really explored it since I was a kid, I guess. Now I’m living here again, married with my own kid, still exploring. Found myself at the pond old Mr. Miller died in. Been ten years or so since he drowned out here, weird to think about. Even weirder, I swear I heard music while I was out there. Maybe someone is staying up at his old place? Thought it was abandoned after he died.

Grabbed my fishing gear on a whim this morning, took another walk to the pond. I ended up staying out there all day, was the most relaxing day I’ve had in God knows how long. I know it sounds crazy, but it was like the pond itself was singing to me. I took a nap on the bank, was damn near dark by the time I woke up. Feels like I might be up late tonight. Almost makes me want to go back down there, would probably fall right back to sleep.

Laura and Sean came back this morning. It was a little awkward between us at first, but things were okay. I asked if they wanted to take a walk, but she said they were tired so we hung around here all day. I understand I guess, but I really wanted to show the pond to them. I’ve been thinking about it all day, maybe it would help her relax. She got a little annoyed I think but agreed to go fishing tomorrow after work. Can’t wait!

We got into it again. I was looking forward to our fishing trip all day at work, she knows I was. I was ready to go the instant I got home. Even though she sat here all day, it was almost two hours after I got home before she was ready to go. So yeah, I was a little grumpy about that I guess. But that all went away once we got out there. The pond was still singing, it instantly put me in a better mood. They both said they couldn’t hear it, and wanted to leave after only a few hours. I could have stayed out there all night.

Haven’t been sleeping well the last couple of nights. I know it’s crazy, but I feel like I’d sleep better out in the open air, down by the pond. It’s that song, feels like it was meant for me. I’ve been laying here for hours, just thinking about it. I bet I could walk down there, take a quick nap and be back before they even knew I was gone.

Last night was the best sleep I’ve had in years I did not want to go when my alarm went off. Just basking in the song was like being rapped in a warm blanket. Tried to get Laura to come with me tonight and she said I was crazy. She’s the crazy one she can’t even hear the song. I wonder where it comes from? Maybe I can follow the song and find the source, bring it back here? I can’t keep sneaking down to that pond, but I can’t imagine going to sleep without it now.

What a day! I called in and spent all day at the pond with the song. It took me a while to work up the courage I’ve always been scared of water and knowing Mr. Miller died out there didn’t make it any easier. But I went out and I did it I found the source of the song. Its the most pretty thing I’ve ever seen like a sphere made of the night sky. I brought it back and put it in the barn. Wouldnt want Laura to see it and do anything with it while Im away not until I can show them. Once they hear the song theyll understand.

Brought Laura out here she still cant hear song called it creepy. HA! I yelled at her. I apologized tho I know its not her fault she cant hear it. O well it gives me reason to sleep out here barns not so bad. Being here being next to it is even better than I would have imagined. So nice so warm song.

Bin out here all day. Work call but told them im sick they cant hear Laura came for food I wanted them to come eat out here with me but they didnt want to Laura mad but once I can learn and can play song they will hear it and all be good

"Had to be me. Someone else might have gotten it wrong."

Receive stories by Blake Anglin in your feed
Blake Anglin
Read next: Why Richelle Meade's 'Vampire Academy' Novels Will Work Better As A TV Series They Did As A Movie