by Brandi Barta 9 months ago in fiction 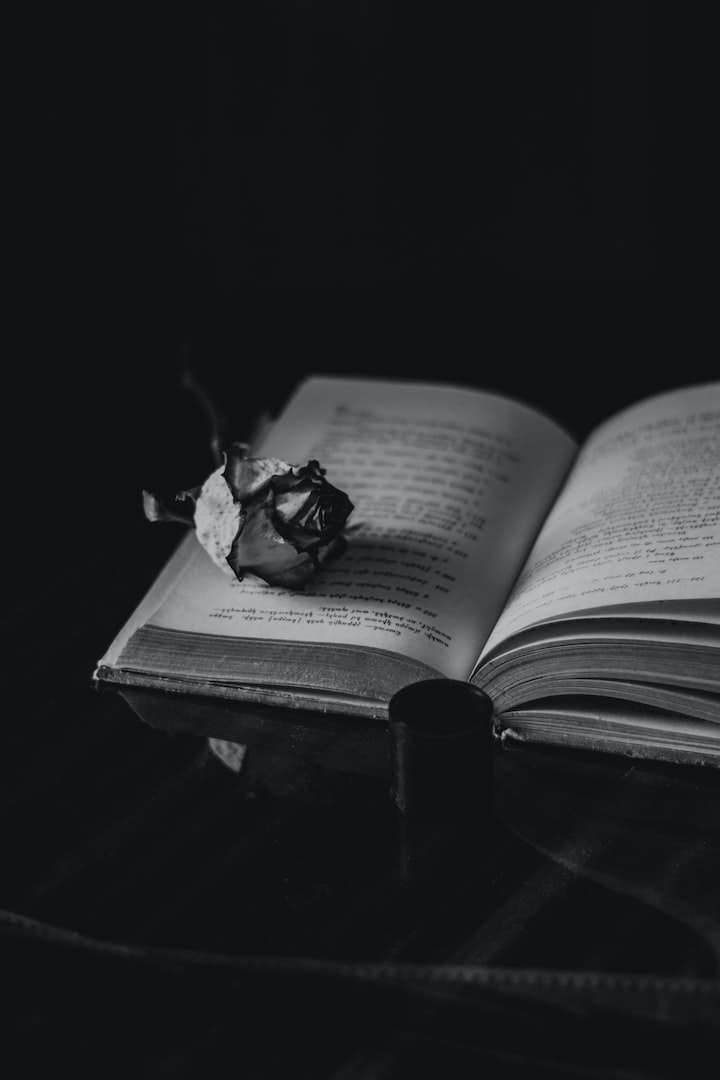 Photo by SWAG Style on Unsplash

​Death row is cold. It’s lonely and unforgiving. It’s mostly quiet, except for the screaming fantasies of freedom that swirl without end in my mind: the sweet smell of cut grass, the light chirps of birds outside my bedroom window, the simple slowing of time during a hot, late-night shower. Those things have escaped me forever.

​I never did what they said I did. The police, the judge, the jury—they were convinced I killed that poor girl. But I didn’t. And it seemed that no one believed me or wanted to fight for my life. I was simply the easy explanation, a means to an end. The scapegoat to a heinous crime.

​I found her in the woods, lying in the mud from the recent rains, clutching a book in her hands. She didn’t have a scratch on her. She looked peaceful, like she was just sleeping, taking a quick nap in the afternoon sun. But she wasn’t.

​I was on my way to my favorite fishing spot that was hidden deep in the woods. A creek cut through the land, crystal clear water teeming with fish. And with the recent rains, the creek would be swollen, making it a perfect time to cast my line. She was by the bank of the creek; water lapped at her feet as it calmly flowed by. At first, I was startled to see another person; this was not a well-known spot. But when I saw that she wasn’t moving, I thought maybe something was wrong. I stepped up to her and she was clutching a little black book to her chest. I shook her shoulder, hoping that my rising suspicions of her demise were false. She didn’t move. Her chest didn’t rise and fall with breath.

​The book in her hands drew my gaze. Its draw was more powerful than the sight of a beautiful girl. It was stronger even than the sight of a dead body. It was clutched to her dead flesh, her fingers intertwined around it, but still it called to me. It was black as night, an abyss in the hands of a girl. It drew the light from the air and consumed it. I could not look away from its depth. I took it from her, prying it carefully from her fingers.

​I dropped my fishing gear without thinking and rushed home to my cabin in the woods; the little black book was tucked safely in the pockets of my fishing vest. Once home, I set the book on the shelf next to my collection of travel brochures and outdoor magazines. And I just stared at it, lost in its implications, for hours. Until there was a knock at my door that brought me back to reality.

​It was the police. Without warning, they arrested me for that poor girl’s murder. Panicked, I tried to explain that I didn’t kill her. I only stole her book. I shouted it over and over again, “I didn’t kill her! I didn’t kill her!” They shoved me into the back of the police car. They booked me for murder. They held me in jail until the trial. Despite the only evidence being my footprints and one of my hairs found on her, the jury found me guilty. The sentence was the death penalty. No motive. No weapon. No clear cause of death. Where was the justice?

​The girl’s name, I learned during the trial, was Margaret Brown. She was twenty-two years old, loved to read, and was going to school to become a teacher. The police never took possession of the book I stole from her.

​That was four years ago. I now have a date for my execution. The execution order reads: “Jeffery Michaels shall be put to death by electric current on July 31st, 1989.” One week. In one week, I was going to die.

​I have no family to say good-bye to. I don’t have any friends or even any acquaintances. In one week, it will be like I never existed. The only evidence I was ever here will be the imprint of my weight on the thin, cheap mattress.

​The execution order played on repeat in my mind, wreaking havoc like an out-of-control hurricane. And I lost it. I screamed, I cried, I punched the concrete walls until my fists were bloodied. Deep into my fit, I heard the metal creak of the meal slot on the cell door open and close. I turned to see what or who had made the sound. And I saw a yellow envelope fall to the floor. My fit paused long enough for me to examine the envelope. There was no name on it. No Address. Nothing.

​I opened it warily. Inside was a little black book. The realization of what I was holding rattled me to my bones. It was the book I stole from the corpse of Margaret Brown! The book slipped from my grip and landed with a small thud on the floor. I quickly picked it up and rushed over to the small built-in desk in my cell. I turned the book over in my hands. There was no title. And a quick flip through the pages revealed that the pages were completely blank. How did this get here?

​I set it on the desk and opened the front cover. The first page read in gold ink “To the person giving this up, to open new doors to new opportunities, the choice has been made.” I pondered the words, confused by their meaning. I read the words quietly out loud. As soon as the last word left my lips, the book began to shake on the desk. The pages flipped rapidly, as if blown by the wind. The book rose from the desk, floating in midair. I jumped back in horror, nearly falling out of my chair, and shouted in disbelief, “This can’t be happening!”

​It floated, pages flipping by one-by-one in rapid succession. Then it began to glow. A bright blue light sprung from the pages, grabbing me by the arms. The streams of light held tight, moving up my arms, growing on me like the most beautiful infection. The light engulfed me entirely, suffocating my screams, drowning away the sight of my cell. I saw nothing but the light.

​My heart slowed, despite my rising fear, until it stopped beating completely. My consciousness began to fade, eaten away by the light. I let the light take over, until I became a part of it. All feeling disappeared. My last thought was, “Is this death?” Then the light was gone.

My eyes shot open. I came to in a blank room with nothing around me but white. I blinked away the brightness and when my eyes came into focus, I saw a small table in the middle of the room, sitting undisturbed in front of me.

​I took a cautious step forward, unsure if my legs would even work. Then I took another step and another. On the table, there was an envelop with my name on the front. I picked it up and opened it. Inside was a single sheet of folded paper. I unfolded it carefully. My hands were shaking. It read, “This is your second chance, Jeffery.”

​I slipped the paper back into the envelope and stuffed it into my pocket. When I looked up, something else had appeared on the table that wasn’t there a minute ago. I looked closely and was more than baffled when I realized what had appeared. On the table now sat two stacks of one hundred-dollar bills, two stacks of $10,000. I scooped them up and stuffed them into my pockets with the envelope.

​Again, when I looked up from my pockets, something else had appeared in the room. A door materialized at the far wall. Curiosity got the better of me. I ran to it and opened it just slightly. Fresh, clean air and the smells of nature poured into the blank room. I could even hear the faint lapping of water as it calmly flowed. Excitement swelled through me and I swung the door wide open. On the other side was a familiar place. A place I had known and loved for most of my life. A place that was stolen from me in the unfairest of ways. I was standing in the woods, my favorite fishing spot only a few steps away.

​I ran full speed to the water and leapt into the stream. I splashed the cool water on my face, letting it wash away everything that had happened. In my celebration, something shiny across the stream on the bank caught my eye. Upon closer inspection, I saw that it was my fishing rod, laying exactly where I had dropped it that day I found the book.

​I couldn’t help but smile as I cast it into the water, slowly turning the reel to activate the spinner jig lure. I cast it again and again, catching fish after fish. Before long, the sun started to set in a wash of purple and gold light. And a thought crossed my mind, My fishing rod was where I left it. I hope my cabin is, too! I packed up my gear, patted my pockets to make sure the money was still there, and made the familiar trek back to my cabin in the woods.

During the hike, I wondered what I might do with my small fortune. But after thinking hard about it, I realized that I already had everything I wanted. More importantly, I had everything back! I had my simple, quiet life. My fishing spot, my fishing rod, and my cabin in the woods; it came into sight as I neared the clearing. And I sighed in both relief and disbelief. I started running.

As I suspected, everything was exactly as I had left it when I stepped inside: the cluttered tables, old blankets slung over the couch and chair, and even dirty coffee cups sat empty on the counters. My eyes darted to the bookshelf where I left the little black book. It was gone! Was it ever even there? I patted the wad of cash in my pocket. Yes, the book had been there!

I made a pot of coffee and sipped it while sitting in my chair. For the first time in a long time, I fell asleep with a smile on my face.

The guard made his evening rounds, ensuring that inmates were locked in their cells and nothing was out of place. He did his rounds with tears threatening to spill over his cheeks. He fought the urge to let them flow, but he couldn’t look weak in front of the inmates. He forced them away.

Earlier in the day, he had received a call from his doctor. The doctor informed him that he had stage 4 lung cancer. Terminal. He had never smoked a cigarette in his life. How could this be happening to him?

When he arrived at Jeffrey Michaels’ cell, he looked through the window and saw Jeffery sprawled on the floor, not moving. The guard unlocked the cell and rushed in. Jeffrey Michaels was dead, but he clutched a little black book to his chest. The guard, drawn completely to the blackness of the book, reached out and took it from Jeffery’s cold hands.

He opened it to the first page…

I guess you could say that I am an aspiring author. All I’ve wanted to do, since I was a little kid, was write stories. It’s my goal to one day publish a book. I’m hoping Vocal will be my first step towards my goal.