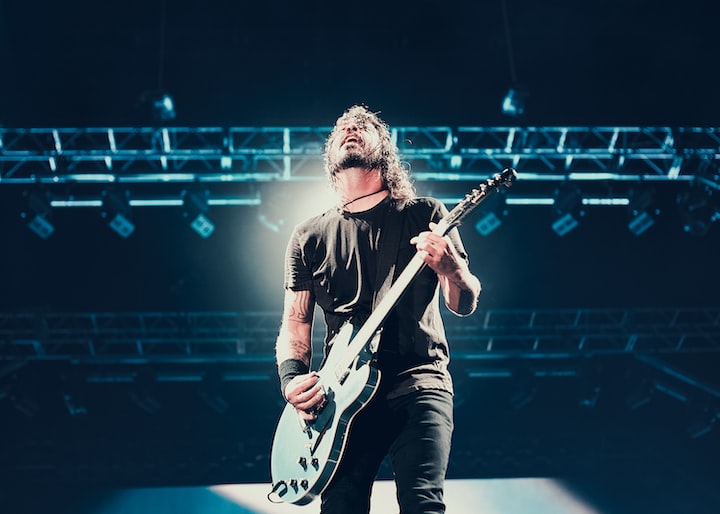 Looking around the mostly empty movie theater, I wondered if anyone else had come to see Studio 666 directly after church like my husband and I did. Maybe not as common an after-church event as a meal with the family or a nap, but hey, we are unique.

Studio 666 has a pretty simple premise. The Foo Fighters are under pressure by their record label to record their tenth studio album. The Foo Fighters want a unique location to ensure their album has an impressive sound and a great story about its recording: an epic location equals an epic album. The label exec sets them up at a mansion where, unbeknownst to the Foo Fighters, an up-and-coming rock band named Dream Widow tried to record an album in the early 90s. Unfortunately, there was an incident that wiped out the band and the album was never completed.

The majority of Foo Fighters do not dig the vibe the murder mansion gives off, but they hesitantly agree with Dave Grohl’s direction and move in to record their album. They meet their nosy neighbor, played by Whitney Cummings, dismiss any of the creepy, shadowy beings they encounter, and try to lay down a record worthy of being their number 10. Not even the death of a crew member can take their focus off the album. Wacky hijinks ensue from there!

The movie is exactly what you would expect from a horror movie from the mind of Dave Grohl. It’s a campy movie with over-the-top gore and blood, approximately 4,072 f-bombs, and enough juvenile humor that I occasionally wondered if I accidentally wound up in the theater showing Jackass.

It checks all the boxes for a classic horror flick. Sex equals gruesome murder, check. Necronomicon, check. Final girl, check. This movie would be Evil Dead if Sam Raimi decided to cast a bunch of dudes in their 50s instead of actors in their 20s.

There is excitement when the camera pans around the table for the first time and shows exactly who the stars of the movie are. Dave Grohl! Taylor Hawkins! Pat Smear! Those other guys! The Foo Fighters are fantastic musicians. They write great songs, put on amazing live shows, and have an unrivaled dedication to their fans. They are not great actors, but it works in this movie. They would not be able to hold their own as actors against Denzel Washington or Meryl Streep, but there is nothing wrong with them playing versions of themselves.

The breakout star of this movie is Pat Smear. Though he consistently looks like he forgot both his lines and the fact that he was filming a movie, Pat was the comedic relief and the heart of the movie. Initially, I was impressed by Taylor Hawkins’s array of board shorts, but I forgot about those after seeing the variety of Pat Smear’s pajamas. The man rocks a pair of pajamas like no other, and he is a precious soul we must protect at all costs.

I debated with myself if the copious amounts of product placement was legit or tongue in cheek. At one point, the band was sitting around a table filled with bags of Frito Lays products. It looked like the beginning of a Super Bowl commercial. Taylor Hawkins was rocking his Adidas while Dave Grohl proudly wore his Vans. They drank from Coors and Pabst Blue Ribbon cans. Several scenes featured Doritos, including one memorable one where Pat Smear loses his bag of Cool Ranch Doritos.

Overall, I give Studio 666 seven drumsticks out of 10. See it if you are a fan of campy horror movies or the Foo Fighters. Now excuse me while I eat Cool Ranch Doritos and book some gigs for my new Foo Fighters cover band, Pat Smear’s Pajamas.

The Nerd Habit is a collaborative group of writers who love all things nerd. We write about the latest happenings in nerd/geek culture as well as short fiction.

More stories from The Nerd Habit and writers in Horror and other communities.