The separation of oneself requires two mindsets. 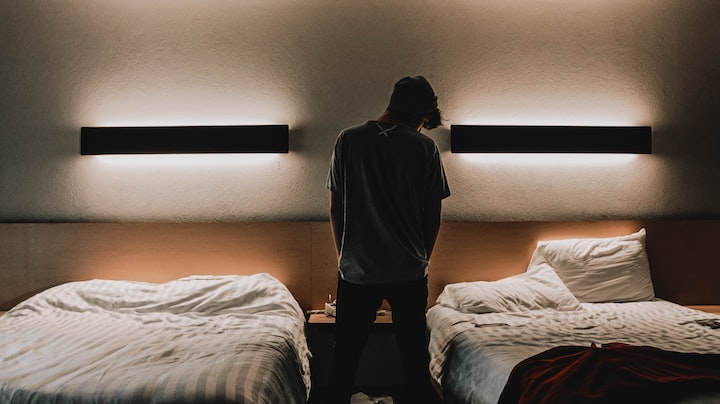 Photo by nrd on Unsplash

It's a pleasure to be able to use a pencil again, a bothersome it can be, stuck in a room answering questions that were not even questions. The doctor kept showing me inkblots on white paper, explaining with undermining ease and with redundant questioning. I do not appreciate the tone when he does, acting as if I did not know what a Rorschach's Inkblot test is. While having seen many of these odd-looking images in many scholarly books, never did I felt like if I had a choice to say what it was. Honestly, I had difficulty answering the doctor's question: 'what does it look like to you?'

It was a drag to sit and analyze the inkblots, just to say it looks like the replication of a cell. Wishing the doctor was as hesitant to write down the answer as I was to answer his question. He would write it down next to another patient’s diagnoses, Caleb Swartz. That’s who I am room with, or as I hate to say it, 'my lazy ass roommate.'

Every morning the nurse comes in and cleans the room. Never my side, but always Caleb’s bed, clothes, and art bench. I never see him work on the bench, for that matter, never see him in the room. Guess we just have different tests and must be why we will be taking an aptitude test tomorrow.

For a lazy person, his piece of work is quite intriguing. Last night he finished a portrait that is hard to explain as if it meant to split the perspective of the daily mind; yet, it has a sense of silver-line of etiquette and serenity. On one side, he botchers the canvas with immense amounts of color, with no direction of lines. Each stroke of color… Is its own line. You can see exactly as it is, Lacey. It looked like the station where we had met in Chicago, the day that you had missed the metro. I honestly believe that was life telling us that we are not as in control of our life as we like to believe. I guess this why I enjoy the second side of the canvas, the silver-railings remind me of the ones directing my focus to your despair. Sometimes, I wonder if I could have been genuine enough to just stop that train, but I had tricked myself into believing in sparking a conversation with you. It's the middle of the canvas that pools me out of this room and onto that train station's platform. If it were not for this letter, I would not have the strength to resist looking at the woman in yellow, walking into the train's mist of steam –– without time to spare, there is nothing there but the reminiscent of her hair. I do not have much more to say, but that she is letting go of thin-air.

Hoping that you would receive this letter, I shall go hide my pencil now; lately, I have been finding it on Caleb’s desk. I don’t understand why he would use my pencil when the nurse gave us multiple pencils to spare. I hope to see him during the day, so I can confront him about boundaries; yet, I only see him during times of slumber. It's at night that I see him stroll through the lucid dream and see him work on his art paintings. If he wouldn't show up so late, I would stay awake but I do not like to go off my sleep schedule. Speaking of it, I must now head to bed, for I am filled with excitement about tomorrow and finding out who I am instead.