by Halee C. 2 months ago in psychological
Report Story

A sin for a sin, my dear friend. 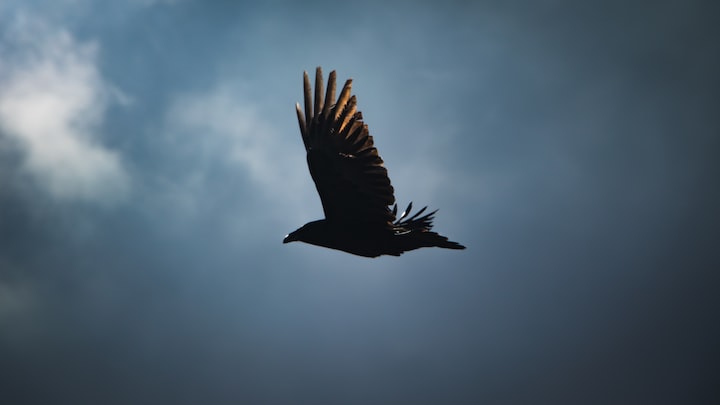 It perched on a branch, not far from my window, watching; staring at me with an unfathomable black eye. Did it know what I had done? Impossible; such a dimwitted creature could not know of my sins. I could barely keep track of them myself! Yet it sat, watching and judging me silently. Could it be? No, I will not let myself think of such idiocies.

It could watch me, but I would not fold myself under his judgment. Turning my back to the creature, I took in the mess I had created. Perhaps the bird was not the fool and I was. Only a fool would make such a mess with his toy. I dared not let my eyes rest on the shape in the corner of the old room, only on the sticky, red that had oozed from the center of the decaying floor. For a moment, the dark pool held my gaze and I could not bear to tear it free.

A tap on the window made me jump and I turned back to look at the beast, freeing myself from the dark cage I had momentarily been trapped in. It was not watching me anymore, but rather the crumpled figure in the corner. Could it sense the dead? If it could, then surely another person could as well! Did they know what I had done?

Did they all know I had done?

Trying to breathe around the coil of fear that wrapped around me, I slapped my hand to the glass, trying to scare the bird away from this room and away from me. It would tell them if they did not already know! The beast merely turned his head in my direction but did not even ruffle a single feather. I pounded again, then again, trying to get the thing to fly and leave me with my crime.

The glass shattered under my assault and the only sound that could be heard was the glass breaking further once it hit the floor.

Still, the bird did not fly.

I was running out of time!

Leaving the bird once again, I hurried back to the mess. My hands shook as I wiped at the dark puddle. Near desperation filled me when the stain simply smeared rather than left the floor. No matter how many cloths I used, the mess never lessened. the pounding of my heart was almost enough to block out the soft whispers.

My hands stilled and I raised my gaze to the shape in the corner. It was completely still. Holding my breath, I waited for the voice to come to me once more.

Had I imagined such a terrible thing?

No, surely I could not conjure something so frightful! Unless I had gone mad? No, I was not mad.

Shaking my head, I went back to my task. The red had now covered my hands completely and I was enjoying the process as I had before this dreadful night. I had let the bird ruin my game long enough. Once again, the whispers began. I stood and moved slowly across the floor to the corner.

Without a moment of hesitation, I grabbed the shoulder and rolled the figure onto its back. The head lolled to the side and I stared at the blank face, trying to find a hint of life in the glossy eyes that could explain the whispering. The mouth was frozen open in a silent scream, but the whispers continued to free the room.

I spun on my heel, trying to find the person who had snuck in to torment me. I would not mind having two toys on this night! I tore at the curtains and ripped the old furniture away from the walls, all while the beast watched me from his perch on the windowsill. The whispers grated down my spine, and in an attempt to drown them out, I slapped my hands to my ears.

Nothing could ease the breathy voice. My steps were thunderous as I stomped back and forth, clawing at my hair. Was this what madness was? The dark prison that refused to release you from its grip? Had I fallen into the endless spiral?

Louder and louder the whispers grew until a bloodcurdling scream echoed in the room. For a moment, I thought the scream was my own, but no. It had replaced the whispers. Different screams, but I recognized each one. One by one, my sins' cries were being screamed into my face! Their pleas for help and their desperate begging made my skin crawl now when before I took immense joy in such a sound.

Was this how they had felt when they had stumbled upon me on their last nights?

My own pleas fell from my lips, begging god, or maybe even the Devil himself to release me from this hell. My shaking legs carried me to the window where the beast still sat, watching me with knowing eyes. There was no doubt that it knew what I had done. They all had to know!

I could take this no more!

I climbed up beside the bird and looked down at the world below. It had been my playground before this night. I had stalked and hunted, but now my prey haunted me.

The screams grew louder and louder, only turning silent when I pushed myself forward, away from the room of my sins. Away from that awful beast. For a moment, I watched the beast as I fell, before silence claimed my lost soul forever.

Just a little lost, and trying to find myself.