by jason grace 3 months ago in slasher
Report Story

the unexpected benefits from the Supreme Court 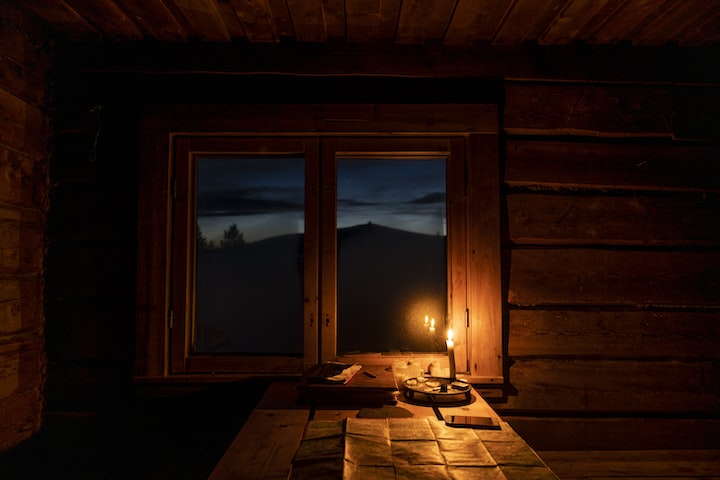 Photo by Hendrik Morkel on Unsplash

Driving down the disused road toward the cabin was a grey SUV, dodging fallen tree limbs and near pond-sized puddles. Its headlights finally shone upon the wooden fence post that signaled the walking path toward the lonely cabin.

The SUV came to a halt, and from the driver’s side emerged a tall man wearing a cowboy hat and boots, and a holstered pistol. He opened the back passenger doors and helped the blindfolded occupants out of the vehicle, a man and a woman in their late twenties or early thirties. Once they were standing on their own, he removed the blindfolds.

The couple surveyed the property. If the SUV’s headlights were not still on, they would not have been able to see anything in the dark forest save the candle in the cabin’s window.

“This is the place? Are you sure this is safe?” asked the young man, clutching the young woman’s hand.

“Hey, I know it’s not much to look at, but we’ve set it up pretty well. It’s out of the way, so you have to admit that’s a bonus, “said the man the couple had only known as Mr. Coyote.

Marnie, the woman, had been told from the very beginning that real names were not to be used. More plausible deniability, they had said. A network of friends of friends, of rumour, and of the dark web finally led them to Mr. Coyote, who could provide them with a time, a place, and a practitioner. It was expensive, but far less expensive than the alternative. She needed this done before the state knew she was pregnant, before the state would monitor every move to protect the fetus.

Marnie and her boyfriend Russ were led up the path by Mr. Coyote, passed what once may have been a well and perhaps a stable until they came to the front double door that was adorned with old-style knockers. There still was no light aside from the candle.

“Now, remember, I do the talking; no real names, don’t even ask. I assure you that he’s quite qualified and wants to help. We’re lucky he could get time off from the clinic. Follow my lead. Capiche?”

Marnie and Russ nodded in agreement and Mr. Coyote knocked three times, the sound echoing into the still night forest. After a few breaths, he knocked three more times, until a shambling could be heard from behind the door.

Slowly the door opened to reveal a sparse interior, dimly lit by the flickering candle. From behind the door emerged a man wearing a surgical mask and smock. “Any trouble?” he asked.

“Not a one, Doc. Thing’s went pretty smoothly.”

The doctor raised a quizzical eyebrow when he saw Russ.

“Hey, he insisted on coming. I don’t see any harm, “explained Coyote.

Doc led them through the empty room into what once was a kitchen toward what appeared to be a cellar door. He reached into his pocket and produced a key, saying “We were really fortunate to find this place. It’s isolated, and there’s plenty of room down there. We have generators, medical equipment, and even a decently stocked bar, if you find that necessary.” He gave a wink to the Does.

“Please, down this way.”

The cellar steps looked rickety but were in fine functional condition, leading to a very brightly lit chamber, at least by the recent standard of the place, where an assortment of medical equipment was orderly displayed and set. The cellar was surprisingly clean and bigger than most would suspect. An entire clinic could operate there if need be.

“If you don’t mind, Ms. Doe, I would like to check some vitals. Just to make sure that there’s nothing I don’t see coming.”

Marnie took a deep breath, nervousness having started to overwhelm her.

“Don’t fret, ma’am. I know your heart rate and blood pressure will be slightly elevated; it’s perfectly understandable.” Doc did his tests and recorded the results in his notebook. Marnie was amused by this, as every other doctor uses computers.

“Everything checks out fine. Now if you could please disrobe and put on this gown. Trust me, it will be easier for everyone that way. There’s a partition you can undress behind.”

Russ gave Marnie a reassuring look as she moved behind the partition. Everything had happened so fast, almost too much for him to process. But through it all, he knew he would support Marnie in whatever she needed to have done.

Mr. Coyote went to a refrigerator and pulled out a beer. He offered one to Russ as well, but he declined. “Suit yourself, your loss,” smiled Coyote. He quickly downed the beer and grabbed another.

Marnie came from the partition and was directed by Doc to a table. “Lay down, please.” He positioned the stirrups and guided her legs to them, and finally fastened the clamps shut; she was ready.

“Normally, I would give a mild sedative. That won’t be necessary for you. Your pain will be agonizing.”

She gasped, and Russ jumped up in alarm and went to approach the Doc.

“Mr. Coyote, if you would please,” said Doc as he waved his hand.

Coyote struck Russ in the back of his head with the butt of Coyote’s pistol, rendering Russ unconscious.

“Secure him as well. This will be even more profit and fun.”

Marnie struggled in vain. She attempted to reach up to the stirrups and unfasten them, but she was struck hard by Doc. As she was stunned, Doc secured her arms.

“Not to worry, we’ll get rid of your unwanted child. Some believe that eating a fresh fetus prolongs youth. Yeah, I know it’s nonsense, but it still pays.”

She looked at him in a puzzled yet terrified way.

“You see, “continued Doc, “your organs and tissues are worth far more than the zygote. And now with your fella, there’s more to be made. But, in truth, that’s just gravy.”

From under the table, he produces a variety of instruments, each more gruesome than the last.

“Mr. Coyote and I love to have fun. Fun torturing, fun dismembering, fun killing. You will be the inaugural playthings for our new Funhouse, “he smiled and giggled. “Don’t worry, you won’t die for days. We’ll take you apart, piece by little piece. After all, we want our organs fresh. And for what won’t sell, well, we are quite the gourmets of your particular delicacy. And, best of all, you’ll be with your man. What more could you want?”

Coyote smiled as he heard Doc’s speech as he shackled Russ. Russ finally awoke after having cold beer splashed in his face. His eyes immediately went to Coyote, who was sparking two large jumper cables. One end was applied to his lip, the other to his groin. “I love electricity,” Coyote laughed as he turned on the power, causing Russ to contort in grotesque ways.

Doc started slowly slicing into Marnie with a bone saw. “Abortion bans are the best thing that has ever happened to us. Thank you so much for coming, “he yelled in orgasmic delight.

Marnie screamed for days as she was slowly flayed, dismembered, and portioned. She lasted much longer than Russ; Coyote didn’t have the control like Doc. No bother, for they both knew that there would be so many more to come. The screams, the screams, the blissful screams….

More stories from jason grace and writers in Horror and other communities.