by Laurel Mora 2 months ago in fiction

The Ocean will have her revenge 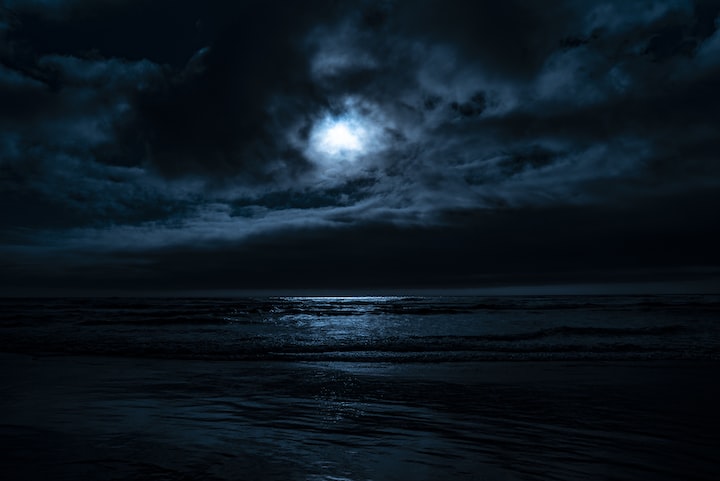 Alana Aguero snapped back into consciousness. Dark blue engulfed her vision. Only the off-white of her shark tooth necklace stood out. As the haze started to clear out of her head, she noticed something peculiar about the tooth: it was glowing. The glow softly pulsed like a heartbeat. Not only did it pulse with light, it also floated with the tip of the tooth pointing skyward.

Alana reached out to grab the shark tooth pendant. Aside from the odd glowing, the necklace was still the exact same one she had been wearing since childhood. Her late grandmother gifted it to her when Alana first became interested in studying marine biology at eight years old.

Out of nervous habit, her thumb started repeatedly running down the tooth. Her nerves grew as she realized she had no idea where she was or how she got here. Panic began to well in her throat.

“Ah, you’re awake.” A mysterious voice said, interrupting her trip down memory lane. Alana jolted. She thrashed left and right trying to find the source of the noise, but to no avail. The voice chuckled, as if finding her confusion amusing. Wait. Alana paused. The voice seemed to come from all directions. But that was impossible, wasn’t it?

A creature swam by her peripheral vision. As it got closer, Alana could make out the lithe, cylindrical body and vertically elongated tail. She recognized this creature.

The memories came rushing back.

Signing up for a shark tagging mission.

Sailing out from the shores of Galveston beach.

Hauling the shark on board.

The shark bleeding from its dorsal fin.

Falling off the boat.

Wait, no. That’s not right.

Being pushed off the boat.

"So you remember," The voice spoke again. "Be at ease child. You've known me your whole life."

Another wave of memories crashed over Alana.

Chasing her siblings across the shore

Being gently rocked to sleep while on her parents' houseboat

"You're the Ocean." Alana realized.

"Yes and no. Your human body has died. I've managed to keep your spirit alive for the time being."

"So I can grant a wish for the guardian who did her best to protect my children. So tell me child, what do you desire?”

Alana thought back to every event that brought her to this moment: her parents letting her watch Jaws at too-young age, being scared of sharks, learning that sharks should be scared of humans instead, spending countless hours at the library reading up about the many different species of sharks, researching colleges with the best marine biology programs, being accepted into her top university with a full ride academic scholarship...

All she wanted to do was help the animals she fell in love with growing up. Show the world that sharks were not the terrifying predators that humans made them out to be. Try to save some of the thousands of lives cut short from the humans who cut off their fins for pseudo medicine.

Hopes for a career in marine biology dashed by the greed of a corporate man. Alana knew in that moment what she desired. The dead always lose something when they come back, and Alana lost her mercy.

The ocean grinned around her. Flashes of tropical storms, raging waves, and tsunamis flickered through Alana’s mind. Hell hath no fury like a woman scorned, and the ocean was a cruel mistress when furious. After all, one of her protectors was just left for dead. The Ocean crooned, voice full of promise:

“That can be arranged.”

Norman D’Arcy considered himself to be a resourceful man. If there was a way to make money, he's probably done it, and he found a gold mine in shark finning. If people were willing to pay out the nose for some fancy soup, who was he to deny them? Sure it was technically illegal in some states, but that never stopped the customers.

The critics never stopped either.

Speaking of which, he still needed to wire the payment to his guys for taking care of that Aguero girl. She first popped up on his radar when he read an essay of hers condemning the shark finning practice. Then, she somehow managed to get the ball rolling on a law for a national ban on shark finning. She needed to go.

It was almost too easy to lure her into his trap. He set up a fake shark conservation program and sent her an email inviting her to join them for a shark tagging event. Everything else fell into place as soon as she accepted.

Norman laughed at his brilliance while heading back to his office to lock up. The laughter died in his throat as soon as he spotted it: a trail of water. Now apprehensive, Norman slowly opened the door to his office. He froze.

Someone was in his office.

The water trail continued to the puddle that surrounded their feet. Their back faced Norman. The smell of salt and fish wafted off of them.

"You're not supposed to be here." Norman called out.

“Do you want money? ” Norman offered. The figure turned around and finally spoke:

Norman froze. He recognized that face. Supposed-to-be-dead Alana Aguero smiled at him with row after row of angular teeth.

“What’s wrong Norman? You look like you saw a ghost.” Alana teased.

"You're supposed to be dead!" Norman managed to choke out.

"Dead like all those poor innocent sharks you killed?"

"By cutting off their fins and condemning them to die a slow death of starvation," She started to approach him. "I wonder Norman. If someone cut off all of your limbs, would you be able to get help in time?"

The news would later report that the body of Norman D'Arcy was found in his office with all of his limbs amputated. Authorities would cite blood loss as the cause of death. Perhaps most perplexing, was the salt water that soaked the office floor.

Receive stories by Laurel Mora in your feed
Laurel Mora
Read next: Halloween costumes through the years