by Rosina Writes 2 months ago in fiction

My hands were dripping in it. 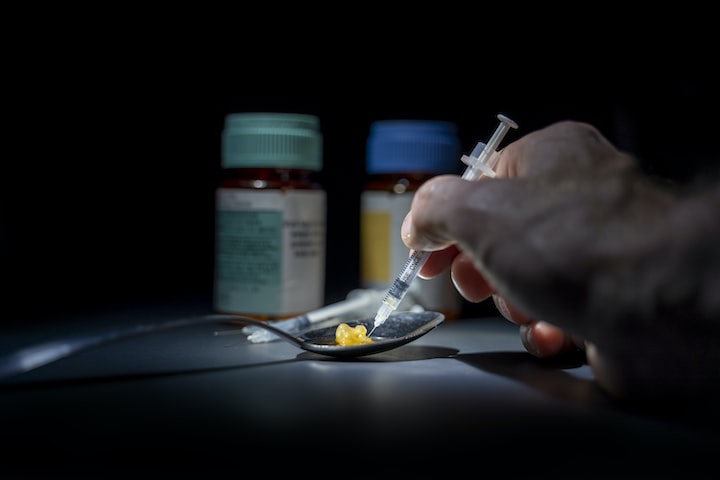 Photo by Michael Longmire on Unsplash

Blood ain’t red when it runs down a sink.

In the movies, they always make it bright, bursting red, but it’s not actually like that. It goes a little yellow once it starts slipping away, retreating like a coward.

And it comes off quick, too. No need for soap, really, unless your hands are dripping in it, and it dries.

And mine were dripping in it that day.

The customer was s’posed to meet me at half three, sharp. That’s what we’d agreed. ‘E was well off - well, that’s an understatement, but anyway - and he was stressed out and open to new experiences.

I was an eager… entrepreneur, you could say.

And we had something he really wanted. A new product we ‘ad, something we was trying out just for him.

I won’t say his name, just ‘cause of his reputation, you know, like he was famous and shit, but this was a big job.

And my first job. Couldn’t believe they'd trusted me with it. I mean, the place was failing pretty badly with all the competition, plus it’s not exactly, y’know… the most widely, uh, respected business. Massive, but swept under the rug like it doesn’t exist.

Our customers always pretend they haven’t dealt with us afterwards, and even when people say something, the customers just lie, even though they look bloody unnatural cause of what they do.

Anyway, so, this big job - if it worked, if the customer liked how the product made him feel, we knew we could be breaking into a whole new market through him, selling the expensive stuff. Boost for the business.

And he’d supply a wedge of my retirement, I’d reckoned, and I’d chosen that way of life so I could buy my own island before I turned forty, see. Win-win on all sides.

So I waited in the room, in the shallow underground as agreed, dim in the winter’s early blanket of night.

Poetic, that, innit? I like to think of myself as poetic, but a man of few words. Hah.

Try this, right, try this: The only time he could meet was when the moon began to show its face so he could hide his own from the outside world.

Do you know what I mean? Poetic, yeah? Yea-

Well- ‘e comes in, right, sits in the chair, looks at me… and then, what does he go and do?

What d’you think he does?

No, not that, you plonker.

He hesitates. Course ‘e does. Wasn’t sure he wanted to go through with the whole thing. Thought that if anybody found out, he’d go down in crimson flames.

Bit of a sticking point. But I had to make him go through with it, y’know, ‘cause my bosses needed that deal. Strict deadlines, we had. Nature of the business. Scheduled appointments, and all.

So I says, we can plan it out, you know, make sure no ones snitches, nothing like that.

‘Course, don’t want him thinking he can hop out of the experiment right then, neither.

I needed that money.

There he lies, in the chair, so I act like the responsible worker, right, and you know wha’ I does? I takes him by surprise so he can’t change his mind suddenly and whip out of there like a bat out of hell.

I plunge the needle into his skin, pow, ‘xactly the way I’d been told and practised, pressing the liquid into his body and holding him down firmly with my other hand while he squirms.

He’d be a lot happier later, I knew. Our customers always were.

Anyway, eventually it died down, and he lay still, and I just knew that he couldn’t feel no pain no longer, right? He was happy as Larry, even before the big event.

That was for starters.

And I gets the substance ready. Proper expensive stuff. What he came for.

That was the moment, I’m telling you. All or nothing in the palm of my ‘and, right then. Heart like a machine gun, y'know what I’m saying?

And with the other hand, I pull out the syringe from my pocket. I distinctly remember the moonlight all shining straight on it and how sharp the point was, and how easily I knew it was gonna go into his skin.

I bring it towards his face.

His eyes are faraway.

Suddenly, the door bursts down and I shit myself because someone’s found us, screaming red raw, right, eyes bulging out their sockets, just a mad person.

'Course, they surprise me, and my hand jerks, the hand with the syringe, and the syringe point is so bloody sharp, and I jerk so fast, it slices straight across the customer’s face, mate!

I looks up at the intruder. We lock eyes.

There I was, standing red-handed with blood on my hands, literal blood.

And I’m just panicking on the inside, my brain’s just a mess of thoughts. Hot at the collar. I’m just thinking, like, I hadn’t meant to kill him, for God’s sake, that was never the plan, and my job was out the window and the bosses were going to kill me for fucking it all up because I’d bloody killed someone and I remember staring down at his body, saw him dead-still with that weird twitching shit you only see once someone’s properly lifeless, you know, just fingers like little spiders, and he had all this blood spatterin’ across his face until you couldn’t see his skin anymore, and he looked like Frankenstein.

I was pissing myself and I was so mad that the security had been so lax to let in some psycho that, by the way, was still screaming.

I mean, like, who does that? You don’t just burst in on someone having a private meeting like we was and start screaming, d’you know what I mean?

And now this maniac had me down as a murderer and all these feelings were just piling up and up and I was proper seeing red.

But then what happens?

Nah, not that. Nah- what, that’s what you think of me? Really? Wow, mate. I should just leave, I mean, it’s not like I can go anywhere, but still-

What happens then, is the customer comes out of his daze and stares right at me, like stone cold sober.

I felt relief for like a split of a split second cause I was thinking, ‘right, haven’t killed him, good.’

Didn’t last long - there’s never much relief in that kind of work, y’know. All kinds of fuck ups happen where someone gets the procedure wrong.

And then I actually, like, fully realise the guy’s looking at me and I’m proper like “This guy really is Frankenstein”.

His eyes narrow like he was puncturing my eyes right back and I'm thinking, I'm dead at this point, like he's gonna take me down for what I’d done to him.

Like, he knew some powerful people. You don’t get be him without putting your foot down, hard, a lot. I was full-out planning on bolting out, get in a cab, be some mad fugitive escaping to someplace, like Croatia or somewhere, I dunno, change my name-

Oh for God’s sake, it’s just a bloody crab. Kick it or something.

Listen, will you?! I haven’t even got to the good bit yet!

Then the customer, he goes, he goes like, “Can I have a tissue, please?”

So I gives him one. Lucky for me, it was a surface cut that got him, nothing too serious. Cheeks bleed like nothing else, I’m telling you. Bit of a scare, you know, since he needed a spotless face to do his job, but it healed up fine in a couple of weeks.

Anyway, he starts mopping his face and I help him out and shoo his maniacal stalker fan away at the same time. Superhuman, am I right?

He didn’t feel anything because of the anaesthetic, so his cheek’s just bleeding and he’s still totally high.

He did lose a lot of blood, so I had to clean it all up ‘cause the other surgeons were stitching him up and all that. My hands got completely covered in the stuff. I’d never seen anything like it, just red absolutely everywhere, like all over the floor. Even in my bloody hair.

So, yeah, it came off pretty fast, ‘cause I washed my hands in cold water in the sink, yellow parts and all.

And the nose job worked out quite well in the end, even with his fans hijacking the surgery somehow. Bloody press. No, paparazzi, them ones, they’re the worst.

That was my first surgery ever, did I tell you that? What a first day, right? Don’t miss them days at all. You always think you’ve killed someone on accident. Imagine! Hah!

Anyway, the filler didn’t give him any issues, and we went on to make big bucks with it. The guy posted me that month’s Vogue magazine with him, right there on the front and he signed it, bless him.

He looks a lot more comfortable now, you know. I see what he meant back then by his smile being, like, a bit off, but it’s more in his head.

The surgery's a big name today, y'know, among the celebs. No clue who’s working at that place. Haven’t been in years.

And now just look at me. On a bloody island.

You thought I was a murderer? You mad? I’m not-

What you doing with your arse on the ground, you idiot?

Come on, then, don’t just sit there, help me! Wave your arms about or something!

No, not there, that’s the leftovers of our ship, you plonker- it’s- no- it’s on the horizon, damnit!

Ah, forget it. Too bloody far away. They always bloody are.

Wish I hadn’t bought this bloody ‘island’ now. Internet shopping, honestly. Total rubbish. ‘Island in the middle of the Red Sea’? This is a bloody underwater volcano.

How long do you reckon we have left until the tide swallows us? You got any good stories?

I'm 19 from Cardiff, on a gap year, and I love creative writing! I joined Vocal+ because of the 'Little Black Book' competition and thought it'd be a great way to challenge myself alongside writing novels.

See all posts by Rosina Writes →