Prayer, Radio, and the Calling

by Christopher Goodin 10 months ago in fiction
Report Story 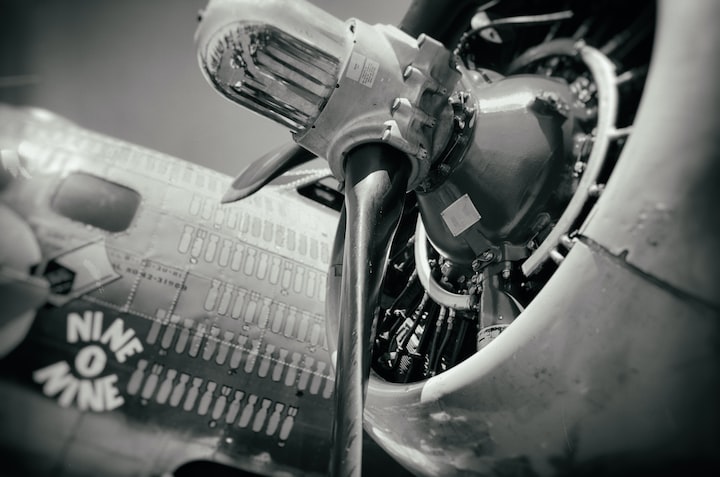 Photo by Robert Gourley on Unsplash

"And I saw the dead, small and great; and their books were opened, and the dead were judged out of those things which were written in the books.

The sea gave up their dead and were judged according to their works, and cast into the lake of fire, the second death."

"Only with stranger aeons, Evans." Co-Pilot Captain Sanders said, interrupting Pilot Captain Evans' reading aloud from his miniature bible. "If you can describe the power of your god, maybe it's not that impressive."

"Truth is found in simplicity, and not in the confusion of things," Radio operator Hanson said, quoting Sir Isaac Newton. Hanson could see into the pilot's compartment through the bomb bay.

Captain Sanders chucked in response, looking back at Hanson over the narrow catwalk, replying, "Sorry, left your call position open on the interphone. Listen up, we're just past Landstuhl. We'll hit Riegelsberg in less than ten minutes."

Hanson confessed his confusion, "I still don't know how the German's could've gotten in behind us like that. We've already taken Riegelsberg, and the Nazis are retreating to Berlin. My flimsy didn't say anything new about a German front. Why all the secrecy? Why all the rush? They have twelve of us birds out here in this ridiculous cloud cover with the same crumby mickey unit for radar. We barely had time to refuel, and we still need repairs."

"You heard the brass. We know our targeted location. Our Jezebel Spirit will keep us together until we return. We just have to seek it out and deliver the entire payload."

"It?" Hanson asked but couldn't be heard over the static interference.

"The Lord told his prophet, Amos, 'Seek me and live.' The Lord is on our side, and we shall overcome all," said Evans kissing his miniature bible then holding it to his chest.

"Nice sermon Reverend." Sardonically commented Sanders. The Captain cleared his throat and spoke, "I got one for ya; Our souls are merely a single grain in the fields of the abyss. Grovel before our Lord for understanding, for we are a great feast. Those who reject his wisdom are bitter and shall be spat out."

"I am not familiar with that verse in the bible. Who said it?" asked Evans.

"It's a much older prophet. One of the old ones that they don't talk about at Sunday school," Sanders said, waving a small black book of his own, the same size as Evans' miniature bible. Evans sneered at the Captain. Rumors had it that the Captain had been known to be a collector of occult items of antiquity beyond the German lines.

"Where did you get that book anyways?" Hanson asked.

“Nabbed this little sucker when we took Göllheim Airfield. Can't read most of it. A lot of it isn't even German, but what I can read offers deliverance. It calls out to me, keeps me held up high."

"The Jezebel Spirit is kept in the sky by science, and by science alone, we communicate," Hanson said, waving the microphone in the direction of the pilots.

In defeat, Hanson turned back to his table and adjusted several of the dials, "Liaison radio is still patchy. We left before we could receive the needed parts. We receive signals easily enough but will unlikely be able to respond with its busted mic. Anyone will likely miss the message unless we repeat it a lot."

"Use not vain repetitions as the heathen do; they think that they will be heard just because they repeat it," Evans replied with quoted scripture again.

"There is no way it should be this quiet." Sanders sat eerily quiet, listening to the rattling of the plane.

"Did you hear that? There is no flak." A faint sound that Hanson could not recognize was heard. Just at that moment, the sky shook from something akin to a roar causing all on the Jezebel Spirit to jostle and fall with the significant turbulence, "What is that thing? Every man to their stations, get those bombs ready to drop. Go, Go, Go!"

No sooner had the Captain given the order that a hole was torn open in the side of the plane. Waves of fire rolled into the aircraft as the open cabin air ripped several crew members out. Fire and smoke, weightless in their descent into hell, remained in the plane. Hanson was thrown back into a pile of parachutes and supplies. The flying fortress unceremoniously forced landed into a German embankment beside a canal before sliding in, covering the bomber with debris and water.

Hanson woke minutes later. Miraculously attached to a working flashlight, and made his way down to the pilot's cabin. Evans was found first, dead as a result of his broken neck. Only an arm, head, and chest of Captain Sanders was exposed. Both mutilated, torn, and crushed beneath the weight of the plane debris and dirt.

Hanson began to panic and sobbed for a moment.

He sniffled, breathed deep, and whipped his nose on his sleeve. Hanson looked around for the radio. It managed to be turned on. Hopeful, he stripped the wires on the broken headphones and roughly twisted them back together with the broken line on the receiver.

"Eureka!" Hanson huffed as sounds began to come through the speaker. He couldn't make it out a first, but it sounded German:

The radio went silent, the battery of the radio died.

In anger, Hanson slammed on the radio, and a piece of its corner flew across the cabin and made a metallic sound that the dirt around them wouldn't have made. Hanson slowly mode over to the sounds and dug some of the earth to reveal the undelivered bombs. No sooner had Hanson moved dirt over the bomb bay that water started to move in. The water from the nearby river begun to enter the compartment.

Hanson got down on his knees in the growing mud and pleaded in prayer, "Father God, save me. Let me see home again."

Hanson cried to his prayer, which became quieter the more he spoke.

Stopping after several minutes as the cold river water came just over the legs of the knelt radio operator, a small book floated up in the water in front of Hanson.

Hanson, in desperation, opened the small book and flipped through its pages, so many of them were illegible in the dark, letters smudged by blood or mud. What words could be seen were ugly and nearly unpronounceable. Flipping past drawings of madness, Hanson read a portion aloud, "We are merely servants of our Lord. The ruler of this outer darkness."

His eyes became weary. The waters rose, the dirt slid, and the bombs' shells clanged under the plane's moving weight. Hanson read more from the small book, "In his dark void, the stars will be stripped away. Great houses will emerge from the depths, coming for the souls that cry."

He cried out in agony as the water and dirt shifted, collapsing plane remains on his leg. The bombs pressed against one another. A slipping of metal constantly screeched and jolted.

A single flickering light came on the radio again. Hanson spoke into the radio, unsure if anyone would hear his cry,

More stories from Christopher Goodin and writers in Horror and other communities.