by Q-ell Betton 9 months ago in movie review

I watch so you really don't have to.

Ladies and gentleman, we have a contender. I have watched a lot of terrible films on Netflix, mostly—I tell myself—to review them. There is, of course, a perverse joy in watching terrible films, but there are some films that test even yours truly’s capacity for awful.

I thought that I had seen the worst film that Netflix had to offer. I’ve watched, what I considered, the worst film on the streaming service, Alien Warfare. Today, I watched a genuine challenger for the title of the most mind-numbingly, god-awful, poorly executed, badly written, directed, and acted excuse for a film I have ever watched. Peelers is a disgrace.

Even for a B-movie horror, Peelers is bad. Really bad. I suppose, as this is a review, I should recount the… story. Blue Jean (Wren Walker) runs Titty Balls strip bar in a small rural town. She is a tough ex-cop and looks after her girls, heavily pregnant Carla (Kirsty Peters), Elaine/Baby (Nicki Wallin), Frankie (Momona Komagata), and new stripper, Tina (Victoria Gomez). She is helped by her security, Remy (Caz Odin Darko), and the bartender, Tony (Cameron Dent).

It is her final night at the bar, having sold it to a sleazy businessman that all the girls refer to as Chromagnum (Al Dales). He comes in to get her to sign the title deeds and offers her more money if she will throw in the police patrol bike she has. Blue Jean refuses to add the bike, but signs the papers.

Four local Hispanic miners—Pablo (Rafael Mateo), Mario (Donovan Wolf), Jesus (Edwin Perez), and Panuche (Andrea Rosolia)—turn at the bar to celebrate. They believe that they have struck oil whilst working in the mine and are going to be rich.

One of the bar locals, Mike (James Challis), brings a friend, Travis (Manny Jacinto), to the bar to show him Blue Jean’s bike. Travis insults Blue Jean and ends up getting embarrassed by her.

Panuche, the miner who struck the oil, does not feel well and goes to the bathroom. In the bathroom, he starts to feel even more odd and begins projectile vomiting black bile. Blue Jean’s son, Logan (Madison J Loos), turns up. He stole a police vehicle and is hiding from the law. Elsewhere, Mike and another friend are having a private lap dance. During the performance, all three are gruesomely killed. 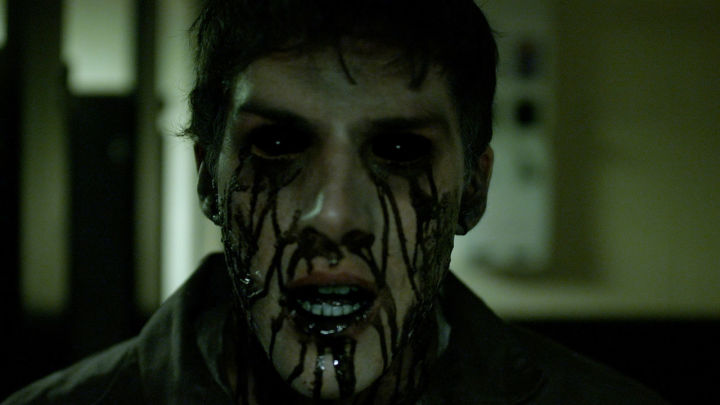 Is there something on my face?

Tina is performing for the first time, Tony is meant to be looking after her. Blue Jean talks to the local officers, Karl Robinson (Rob Scattergood) and Simone Lacey (Katherine Blaylock). They are looking for Logan. An irate man pushes past them.

He is Stuey (Mark Anthoney), Tina’s partner. He rushes onto the stage to confront her. Tony drags him off the stage with Tina following. As Tina and Stuey argue, she is killed. Stuey is also killed, but Tony manages to fight the assailant off, grabbing the oily spikes that had killed both Stuey and Tina.

Officer Simone confronts Logan, who had been hiding in the office. Farmer John (Jason Asuncion), the bar chef, shouts abuse at Remy and Tony as they drag the bodies of Tina and Stuey into his freezer. On stage, Frankie is doing her Thundercunt show.

Blue Jean confronts Pablo, telling him that one of her girls was attacked and the assailant was covered in oil. Simone and Logan are getting amorous when a snarling, oil-covered Mario burst into the office. He kills Simone, but Logan shoots him. Elsewhere, Tony has been driven insane by touching the black oil, stabs Farmer John in the neck, and cuts his head off. He then kills everyone in the kitchen.

In the main bar, Remy, Logan, and Blue Jean are clearing the patrons out. Frankie goes to get the other girls. Pablo comes in and kills Elaine. Blue jean bashes his head in. The three women leave the dressing room. As the bodies pile up, those remaining—Blue Jean, Logan, Remy, Frankie, and Carla—head to the kitchen to get Farmer John’s weapons stash.

Frankie gets killed. Blue Jean works out that water can kill them. Chromagnum cuts off the water. Midnight has passed and he owns the building. Remy says they can use beer. Elaine goes into labour. Logan stays with Elaine as Remy and Blue Jean go to kill the rest of the oily zombies. Remy gets killed.

Blue Jean kills two of the oily zombies. Chromagnum comes into the bar. He knows about the side effects of the oil. Elaine is having her baby. Chromagnum is killed by, a still alive, Pablo. Blue Jean bashes him again. She then goes outside and fights with a zombie-oiled Travis. Elaine has her baby, but is killed by Pablo. Logan kills Pablo.

Blue Jean is still fighting with Travis. Logan comes and kills him. They set the bar on fire and leave on the bike, baby in tow. Logan is infected by the oil. The end.

No holy water? What sort of a weapons cupboard is this?!

Woah. Um, I’m not even sure where to start. On second viewing, it is obvious that it was made as a deliberate B-movie. Unfortunately, the script by Lisa DeVita is terrible. It is plodding, unfunny, and not at all knowing in the way, say, Sharknado was.

The silly story by DeVita and Sevé Schelenz, who also directs, is basically a zombie film with a stupid magic oil twist. It is utter bollocks. Not that I expect high originality in a horror film, but it was still weak.

Apparently, not only is she a legitimate actor, she has been on stage. Trod the boards. I can only suspect that it is the woeful script that made everyone look so amateurish in this film.

The film, according to its creators, was aiming for action horror, as DeVita got the idea whilst living in LA and seeing a fight break out in a strip bar. Some ideas should stay in your head.

The film neither commits to horror or action properly, and with its lack of humour, it is not funny either. The directing is okay; everything is in focus and there is a semblance of following a story, but it is not good. There are unnecessary shots just to show off, adding nothing to the story.

There is an opening tracking shot—homage to Scorsese no doubt—following Walker’s Blue Jean into the bar and around the club. That is as good as it gets. After that, it is just 95 minutes of too many cuts and overzealous shot selection.

Peelers is only for lovers of B-movie horror, of which there are many. Even so, I would still advise being very drunk when you watch it. For anyone else, avoid.