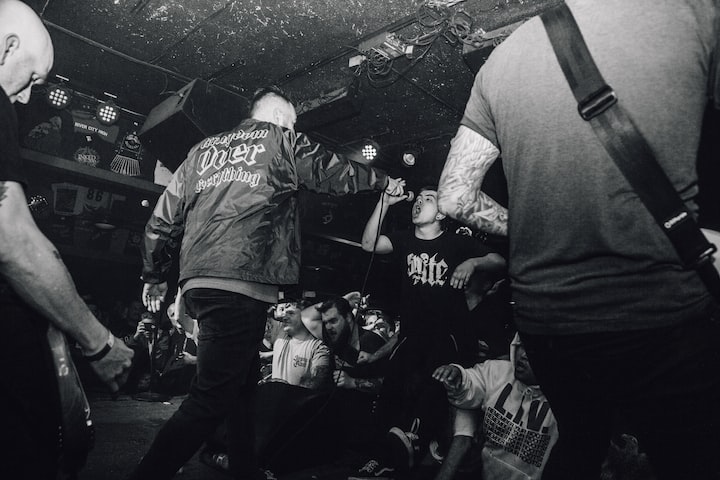 I grasped my guitar. It felt warm in my hands and pulsed as if alive. We were to perform in 5 minutes, and I clung to it desperately...protectively. This was to be our big break. My bandmates sat in various positions around the greenroom, most of us anxious, except my lead singer. He was drenched in cockiness. To him, success was guaranteed. If I had what he had, I'd be cocky too.

I heard the screaming of the crowd while the band before us squealed and screamed the notes of their final song. The sounds seemed to swirl around me and combine, a theme song to my anxieties. Our lead singer, "Axel", started to warm-up his voice, an annoying, warbling sound. He had picked the most stereotypical stage name to go with his diva persona. Honestly. it was fitting. I turned as I saw movement to my right. Our drummer, Kal, had snorted something that suspiciously looked like cocaine, judging from how quickly he wiped his nose. I guess everyone has their way of dealing with stress.

The bassist, Jonnie, sat next to me. He wanted to review the chords on the first two songs. I had memorized his part, as I did with everyone's part in case they ever came to me. I was in the process of going over the names of the chords he'd be using when the stagehand knocked hard on our door. He was a squat, cranky man, with long, oily hair and a sour expression that hinted at an equally sour attitude. He barked at us to get ready to go up in two. The keyboardist stood up to take a piss, Axel looked himself in the mirror, and Kal swiped at his nose again before we all picked up our instruments and started heading towards the stage. Kal would have to adjust the drumset already provided by the venue on the stage. Hopefully it wasn't what he considered "shitty", because if it was, we all wouldn't hear the end of it that night and all mistakes would be blamed on their quality.

I took a deep breath, sighed, and then donned my guitar. She was blood red, a flying-V Gibson with mother-of-pearl inlays, a whammy-bar, and a black guitar strap. Left-handed, like me. She never went out of tune. She seemed to hum in anticipation.

The curtains closed. We made our way onstage, and Karl began adjusting the provided drumset, grunting and mumbling as he does whenever he needs to adjust before playing. He hadn't starting yelling at the stagehands yet, so that was a good sign.

Then Jonnie took his place to the right of Axel, while I moved to his left, near the edge of the curtains. The keyboardist stretched and popped his fingers before adjusting his chair and sitting. Amps, keys, microphone, and drums were tested, before the same squat stagehand came to warn us that we had 30 seconds before curtains up. I heard the crowd roar and pulse with anticipation, and my guitar seemed to vibrate with them. Axel guzzled some water and belted out a long scream as the curtains came up and the crowd raged. It was showtime. I bit my thumb hard enough to draw blood as Karl came in with the drums and I got ready to come in with my guitar. Upon tasting my blood on the strings, the guitar came to life, moving my fingers in complicated chords and patterns as Axel belched out his sorrowful lyrics. He screamed about how hard he works all day and how little he is paid. He screamed about taxes and the dying Earth, and the hypnotism of social media.

The whole time, I played, the guitar sucking up my blood like a hungry child nurses at his mom's breast. I grew pale as the set continued on and the crowd raged and moshed and screamed in agreement. It was a sea of people, heat, screaming, violence, and fingers outstretched in devil horns. I was the liveliest I had ever been. I felt like a conduit of chaos, leading people to revolution with my blood. I'm sure everyone else felt the same. I played and played, extending guitar solos and feeling my guitar playing me as well. We fed off of each other, and gave a grandiose encore. Finally, as the curtain came down, I collapsed. I had done it. We had done it. I was finally one with my guitar. She flowed through my body, and I fit snuggly into the warm contours of her oak, contracted and forever bound together by blood and music.

Just a human being trying my best. I love literature and I hope you love my stories.

More stories from Aliya Penyacsek and writers in Horror and other communities.