On Wings of Silver

by Sylvia Shults about a year ago in fiction
Report Story

If Amelia Earhart's plane could talk ... what stories would it tell? 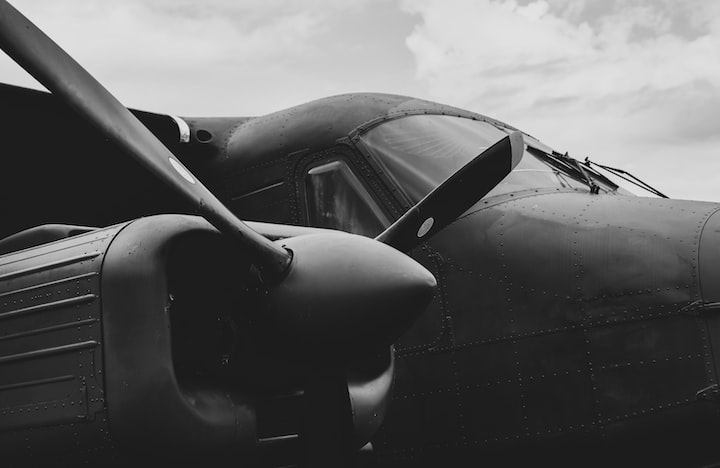 Photo by Gabriel Küenzi on Unsplash

“[Amelia and I] considered the plane she used as if it were a living creature. It was like a favorite pony. We said goodnight to it and petted its nose and almost fed it apples. The last plane…was the one we were especially attached to…”

As always, I came alive the moment she walked into the hangar.

“Electra, sweetie, there’s my good girl! How are you?”

I thrilled to the sound of her voice, shivered happily deep in my guts at the touch of her hand on my skin, welcomed her as she climbed inside me. She sat down and wiggled a little to get comfortable, the way she always did.

She ran her hand gently over the top of my instrument panel. I knew her touch, warm and loving and sure. I knew her scent, and every curve of her body. I had cradled her through countless hours, protected her from wind and rain, been her shelter as well as her transportation.

Most important of all, I had helped her dreams come true. Amelia wanted to fly. I was her magic carpet. Together we were unstoppable.

“Tomorrow morning, sweetheart,” she whispered to me. “Tomorrow we’re going to fly around the world. How’s that sound?”

She gave my dashboard an affectionate pat, then levered herself easily out of the cockpit. I ached with her leaving, but I understood the reason for it. As much as I enjoyed her company, I knew she couldn’t spend all her time talking to me. She was there in Miami to oversee the final preparations for our departure.

Under her supervision, I was filled with fuel, topped off with oil, and inspected from nose to tail. I basked in her care. I felt pampered and polished, my silvery aluminum skin glowing in the sunshine that slanted in through the open door of the hangar. My heart glowed too, with love for my Amelia. She was so courageous, so independent. She was my mistress, and I loved her.

I felt her touch, among others, as she helped the mechanics push me out of the hangar. She was always willing to lend a hand, even if those pretty hands got slimed with grease. I loved her for that too. “It’s only grease, it’ll wash off” -- that was just her nature.

As they wheeled me to a stop, a reporter called out to get Amelia’s attention. “Miss Earhart! Carl Allen, of the New York Herald Tribune. Can we talk?”

She turned, smiling and radiant. Our adventure was about to begin, and someone wanted to share her excitement with the world. I relaxed in the sound of her voice, happy and girlish, as she answered question after question. She stood near my wing, absently stroking my flank as she talked. Noonan, her navigator and co-pilot, hung back as Amelia spoke with the reporter. His role was important, true enough, but it was Amelia’s show. Noonan seemed content with that.

Then I heard the words that sank into me like a tire iron thrust right through my engine block.

“I have a feeling there is just about one more good flight left in my system, and I hope this is it. Anyway, when I have finished this job, I mean to give up the major long-distance flights.”

Give up? Give up flying? She couldn’t…couldn’t possibly mean that. Flying was her life. Without flying, my existence was pointless. To be grounded, tied to the earth, a prisoner of gravity when your destiny is to soar higher than eagles…why, you might as well rust away in a scrap heap. No, I couldn’t believe she could actually want that for either of us.

Around the world I brooded over her words. We flew over South America, over the vast deserts of Africa, over the mountains and rice fields of India. My engines droned on, through sky country of towering cloudbanks, through starry diamond-sparkle skies, through the sheer nothingness of empty air. I carried my two passengers for thousands of miles, and still I brooded.

But I carried on. Through the lonely darkness and the bright empty sky, I carried on. Even when we flew through Indian monsoons so violent that the rain beat patches of paint from my wings, I carried on. My wings rubbed raw, my guts still aching from Amelia’s casual dismissal of us, of our future together, I flew onwards, chasing the limitless sky.

I started by sabotaging my radio.

That’s how badly I wanted to be with her. I was willing to sacrifice myself, an inch at a time, to keep our dream aloft, just for a little while longer. What did it matter if we both perished? Our dream of flight would live forever.

Amelia discovered my act of sabotage on her way to tiny Howland Island, a speck of sandy beach in the vast blueness of the Pacific Ocean. Over and over she called out to the Coast Guard ship Itasca, her protector, her lifeline to the world below. I heard her voice, high and panicky, giving their course and position over the radio. I was content to let her voice, still sweet to me, drift out over the airwaves. I had cannibalized the receiving end only. She could call for help all she wanted, calling into the loneliness of the still, silent dawn. No one would answer.

She tried again, alarm sharpening her voice to a razor’s edge. “KHAQQ to Itasca. We must be on you, but cannot see you. But gas is running low. Unable to reach you by radio. We are flying at altitude one thousand feet.”

Yes, we were running low on fuel. The panic in her voice tore at me, but her concern only fed my resolve. I started gobbling fuel, nearly choking on the rich mixture in my haste. Then, steeling myself, I began the final, fatal part of my plan.

I shut down my right engine -- only gradually, so that Noonan wouldn’t notice. Amelia noticed, though. Bless her, she knew every noise I made, every roar of my throttle, every throbbing hum of my engines. A spike of adrenaline surged from her chest to her shoulders to her elbows, and spun in the tips of her fingers. Fear oozed out along with her sweat where her palms gripped the controls. I tasted it, and the electric tang made me shudder.

Noonan grabbed for a handhold. “What was that?”

“Just a little bobble,” she yelled back. “Don’t worry, I’ve got it under control.”

She toggled the radio. “We are circling now but cannot hear you. Go ahead on 7,500 either now or on schedule time of half hour.” Now, now, her voice pleaded. For god’s sake, don’t wait. Don’t leave me out here alone. Answer me now!

I lurched underneath her. I couldn’t help it. I was weak from loss of fuel, giddy from sucking it down so quickly. The blue ocean beneath us looked cool and welcoming, an endless sparkling satin sheet of constant motion.

For one terrifying moment I regretted my rash decision, born of loss and pain. I gulped the last dregs of fuel, clawing for more altitude, one more foot of sky. I wanted to fly, oh, how badly I wanted to fly!

Then I remembered Amelia’s words, the careless rejection of our countless hours of flight together. My guts burned with humiliation. My propellers still turned, the magnetos still prompting the spark plugs to fire. But the sparks fell into empty air. My fuel was gone.

Amelia feathered the propellers, hoping to coast to a smooth landing in the ocean. The spark plugs stopped their futile firing. The flames in my heart settled and died. It was over. I was finished.

Amelia wrestled with the controls with the strength of desperation, trying to keep my nose up as we fell. We hit the water hard. I landed on my belly, tumbling as I struck the surface. I felt a wrench as one of my wings tore free, and I let out a metallic shriek of pain. The water came up fast, sucking at me, wanting to carry me down. I fought the pull of the salty depths, but I was so tired. I wanted simply to drift, to drift and forget the pain.

Then there was only darkness.

“Ah, my beauty, my precious one. You are safe now, safe on dry land. We will care for you, my beautiful flightless bird.”

The hands that stroked my silver skin were a stranger’s hands, but they were kind and gentle. The voice that soothed me sounded like a trickle of cool water, the trill of a foreign tongue.

“Emperor, we have begun our examination of the American woman’s aeroplane.” There was another voice, younger, one that hummed with excitement. “You were correct. In every way, it is the most modern aircraft that now exists. The Lockheed Electra, thirty-nine feet long, having a strength of 550 horsepower, capable of speeds up to 200 miles per hour.

“Its capture will give us the information we need to build an entire fleet of aeroplanes for you, Emperor. With the knowledge this plane will give us, in a few years we will be a match for the Americans. We will attack their base at Pearl Harbor, and they will be powerless to defend against us. Your empire, my lord, will stand as an example to the world!”

“Do you hear that, my beloved?” The first voice was back. It was rich with desire, and it made me shiver. “You did not know how important you were to the Empire of the Rising Sun, did you? How much you have to teach us, my sweetest!”

It’s funny to think about it now. My children number in the thousands, but every one of them is called Zero.

More stories from Sylvia Shults and writers in Horror and other communities.