by Robert Fael 9 days ago in monster

A cautionary tale of what happened when the vultures lost their taste for peaches. 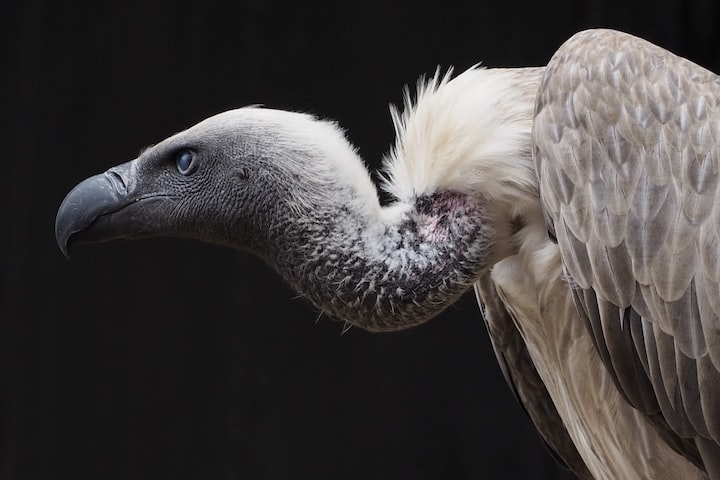 Photo by Nick Kwan on Unsplash

In the early times, the world was a place of wonder and bounty. The lion would lay down with the lamb, in peace and tranquility.

“Yea verily this is a wondrous place of great bounty,” quoth the lion, chewing idly on a blade of grass.

The gods were happy. They beamed down on the world with the same benevolence as cast by the gentle warmth of the golden sun.

On a day such as this, much as any other, a gnu puppy gamboled playfully by the waterhole with its friend the crocodile puppy — all young being deemed ‘puppies,’ because the gods couldn’t be arsed with pointless complexities.

In a moment of youthful over-exuberance, a single crocodile tooth grazed the thigh of the gnu puppy. A droplet of blood blossomed forth. All would have been well if capricious gravity had not chosen that instant to steer the life-giving liquid onto the tongue of the crocodile.

The crocodile puppy licked its lips. Salivated. The gnu puppy was the first animal to know fear in the presence of another. It backed away, it’s ungainly legs made weak by fright. It’s companion, though young, was fast and deadly.

The gods were concerned. Shocked even. Yet confident that such a small amount of blood would have little impact in such a large expanse of water. An isolated incident, they agreed.

But even gods are fallible.

Though they had created the beasts, the birds, the fish (and all other things that walked, wriggled, swam or crawled), they didn’t bank on the heightened senses with which they had imbued such as the lion, the hyena, and the hawk. Soon the plains were red with death. High were the piles of bones and entrails. The golden sun continued to shed its warmth, and soon the stench was such that even the carnivores turned away.

All except the vultures, who had recently discovered that the juicy peaches they previously favored no longer satisfied their appetites.

The gods, seeing the destruction of their carefully created tableau, called the animals together.

“This must stop,” they decreed. Their voices were gentle, but imbued with that proper gravitas you expect of the godlike. “Return to the peace and tranquility of your former ways,” encouraged Hoki, the god of arbitration.

The animals, unsurprisingly, had separated themselves into two groups, predators and prey. They whispered and grumbled among themselves. Finally, a jackal stepped forward.

“The fault is not ours, but yours,” it said. “We are but creations of your will. How can we be blamed for flaws you overlooked in your eagerness to play… god”?

The gods pondered. The prey quaked. None was brave enough to stand forward alone, but the combined pleas and whining became a cacophony.

“ENOUGH!” roared Poki, goddess of love. “I shall combine adversaries, creating new beasts. Thus will they understand each others’ hunger. Peace will return”.

Not exactly. The sabre-toothed wombat, the great white seal, and a host of other poorly conceived creatures were either too confused to eat at all, or began gnawing at their own appendages.

Toki (the god of things that seemed important at the time, but turned out not to be later on), returned each to their original form. The bloodbath continued. The predators ignored the gods. The prey begged and mewled incessantly outside the god’s windows, so none could get a decent night’s sleep.

Once again, the animals were summoned. The gods had chosen Joki, the god of severity, to speak for them.

First he faced the predators. His voice boomed. “You shall take none but the old and infirm. Though the prey are fecund, that is no excuse for greed”.

He turned to the prey. “Wander not alone,” he advised. “Your strength is in numbers. Defend one another… and don’t come crying to us if things go wrong.” The latter wasn’t perhaps as sympathetic as it might have been, but the sheep had kept him up all night with their bleating.

Joki nodded to those few gods who’d bothered to turn up, as if to confirm the efficacy of his warning. His companions gave small, godlike shrugs.

A tiger glanced hungrily at the caribou beside it. A snarl rumbled deep in its throat, precursor to its deadly attack. The carnage that followed was, if anything, worse than before. As far as even a god’s eye could see, torn bodies, fur and feather created a field of gore. The cries of the victims were bad, but somehow the wailing of those who only stood, stared and pointed was worse.

Their patience exhausted, the gods summoned their last resort.

In the midst of the mayhem, a low moaning was heard. An eerie sound that demanded attention. Where the carnage was at its most horrific, where predators gorged knee-deep in the flesh of the defenseless, a whirlwind appeared. The animals backed away. An uncomfortable silence washed through the assembly. The gyrations slowed and the dust settled.

A beast was revealed. It was neither large, nor heavily muscled. Its fur was sparse, as if unfinished. Nor did it benefit from great claws or ferocious teeth.

Yet every animal quietened. Each took a step back. There was something wrong about the newcomer, something more than just predatory. It was inherently evil.

When I was small, my mother left me in the garden, hoping the pixies would swap me for a changeling. They didn't want me either. Is it any surprise I turned out a bit strange?

See all posts by Robert Fael →