by Nicholas R Yang 12 months ago in fiction
Report Story

An obsessive Woman in a race against time struggles to decrypt ever-changing scrawlings of someone... or something in a small notebook. 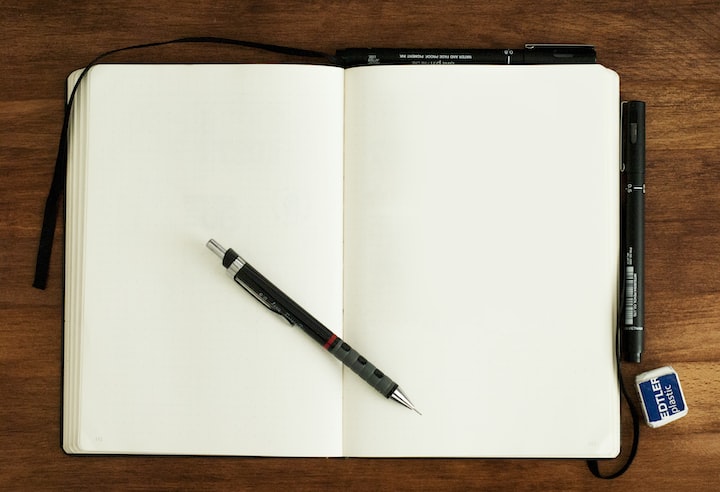 Photo by Mike Tinnion on Unsplash

"Has she been doing it again?" I heard the orderly’s annoyingly raspy, whisper of a voice, ask his colleague outside my door. They always talk like I’m not here, it’s like I am a ghost to them. The worst part is that blasted Radio I always hear playing from somewhere. Day, night, always playing...something.

"She’s been sitting on her bed all night staring at that blank diary of hers, endlessly flipping through its pages. I don’t know what she think’s is in there. A hell of a lot more interesting than looking at those four walls I would bet." His colleague responded with a chuckle, I looked up at the door agitated. I knew it was almost time.

It’s not empty, that’s what they think… I see all the drawings, the sketches she leaves me at night... that Radio keeps me awake.

"Should we get her moving or what? She has an appointment with Doctor Sleep in an hour. She needs to go see Jeffreys before her medication."

"Medication, medication… I repeated the words under my breath as I flipped to the next page, drawings scrawled in blood slid down the paper, faces of horror, screaming dreamers faded into jumbled words and phrases. Just as I thought I had the answer they changed once again, shifting into unrecognizable Kanji.

"Damnit, she knows I can’t read Japanese. She always does this." I spoke under my breath, eyes flicking from side to side trying to decipher the indecipherable lettering. I gave up and moved to the next page. "Turn that damned Radio off, I'm trying to concentrate!" I called out.

Doctor Sleep is coming, he’s coming, Mara too. I begin to feel agitated when it’s blank for too long... How would I be able to figure out what she wants if I must sleep all the time? I must save them. I wish they would see that I’m doing this for their own good…

"Mara is coming for us, and she wants something. I know, because I’ve been up three days in a row reading through the messages, but that doesn’t mean I’m crazy. She changes the words and drawings constantly, it’s not my fault." Radio hissing...

Apparently, I had been speaking out loud as I suddenly felt the orderly’s hands lightly lift under my arms. Their irritating voices grating on my eardrums,

"Okay Julia time to go, Mara’s not real, there is no such thing as Ghosts or Sleep Demons." The black-haired, muscle-bound Nurse said, taking the diary from my pale, clammy hands.

"Let's go, it’s time for your appointment with Doctor Jeffreys. We have to go give you a quick shower." The other, smaller man with the mustache said softly, straightening his white scrubs. Before proceeding to push me through the open door to the hallway. -Frank? Is that you telling me to Fly Away?- "I don't like Doctor Jeffreys..." I protested, ignoring them and grasping at the black, velvet-bound diary without success.

I lost my grip as the Orderly tossed it aside. It fell away, landing on the white and grey tiled floor with a soft thud then sliding under the pale blue hospital sheets hanging loosely from the uncomfortable, stone-like, mattress.

"She’s not going to be happy with you guys... Especially you, for throwing that." I warned them out loud as they straightened me in the wheelchair and placed my green towel and toiletries on my lap. The morning meds always made me rubber-legged, and dopy. Sometimes I needed a little extra help moving around. -"Come fly with me, let's fly, let's fly away!" I liked this one-.

The smell of this place sickened me. At least in my own room, I could have the window open and get some fresh air. The stench of too much Bleach mixed with Dettol permeated the air, making me wretch a little.

The countless white doors of the hospital block slipped by as they wheeled me creakily down to the shower stalls in time to Frank's swing. But, my anxiety still grew the further I got from the book.

What could it be saying now, maybe I’ve missed a message, maybe this was the moment something would show up that made sense? The more I thought the more anxious I became. Lost in thought, I showered and got dressed again. -Damned Static again... couldn't they leave it on sometimes?- The Orderly’s were waiting outside the stall for me to finish.

"Let’s go, Julia, we have a schedule to keep. Doctor Jeffreys is a busy man. You don’t want to miss your chance to secure a release." Muscle spoke with his back turned, chuckling.

He was always mean to me for some reason… When I was ready, Mustache and Muscle lifted me back into the chair and rolled me hurriedly away towards our next destination. -Radio Static growing louder?- I don’t have time to learn their names, it wouldn’t matter anyway. They won’t be around much longer, I fear.

"Okay Julia, here we go. This is where you get off and we head to lunch. Good luck on your release!" Muscle called back over his shoulder, the two laughed together at some unspoken joke as they walked away leaving me alone in the dimly lit hallway. The dull white fluorescent bulbs made my head hurt.

"Someone turn down that damned radio or put it on a channel at least." I thought to myself as I stared at the intimidating steel door a moment, Doctor Jeffreys, PhD. was scrawled across the frosted glass in cracked and faded black lettering.

Was that whispering in the static? I thought to myself as I looked around uneasily. It most definitely was… Quickly, I rapped on the window to the office, wanting to get out of that unsettling and dreary-looking hallway.

"Enter please!" a voice called out from somewhere beyond the dungeon door. I pushed myself out of the chair trying to steady my jelly-like legs before walking in. I had to look like I was healthy; I need out of this place. I grasped the cold steel handle pushing it down entering Doctor Jeffreys’ dark green office, the door creaking as I slipped through.

"Ah! Miss Julia! Always a pleasure, always a pleasure. Please come in, have a seat." His slender hand slid through the whisps of greasy black hair he used to cover his balding head as he gestured to a comfortable-looking red and black Gothic-style chair that sat opposite his own. He waited for me to have a seat, pushing up his round glasses.

I smiled, nodded, then entered, walking carefully towards the assigned seat. I hate how he was always so over-enthusiastic about everything. I thought about the book and this awfully coloured room as he spoke; and why does he have this dreadful-looking, claw-footed, black oak desk. It makes this place feel like some sort of bizarre, 30’s noir horror film. Not to mention the strange portraits of people no-one knows, hanging about the walls… -Frank has me under his skin now too, I guess- I caught him in the middle of his sentence, I wasn’t listening.

"…A feeble thing, the human mind. A single chemical imbalance, a tiny hiccough in the psyche, one becomes the next Albert Fish; or, if you’re lucky, the next Albert Einstein. Did you know that minuscule memories at the wrong or right time, small shocks to one’s mind all can have a lasting impact, Julia? They can cause strange things that plague one's mind, fears, and desires. Things like: Arithmophobia, Xanthrophobia, Arachnophobia, Sesquipedalophobia... My, I could go on… all these things form because of tiny abnormalities in the mind." Doctor Jeffreys looked at me over his glasses, damn, he could tell that I wasn’t paying attention…

"Much like your obsession with your empty book. Depressing, isn't it Julia? Even more so, that you happen to be a woman." Doctor Jeffreys leaned back in his chair staring at me through his wire-rimmed glasses with his disgusting, brown, beady eyes. Mine flared jade, in response.

"Excuse me, Sir, just because I'm a woman doesn't mean I am prone to being mentally unstable. You’ve already given me un-needed shock therapy. I don't even know why I am in this place." I looked at my powdered blue patients’ robes, disdain on my face then shot up from my chair and started to pace the suddenly overly bright room, my cheeks were hot with anger.

"My apologies Julia, I didn’t mean to offend you. I was merely quoting the most recent science. I see that you've become agitated, why don't you tell me how your day has been going? Has anything strange happened? Have you been reading your book again?" Doctor Jeffreys folded his skeleton-like fingers and leaned back onto his desk, scrutinizing my every move like he always did.

I thought a moment; I knew that I had been. I knew that blasted book haunted my every waking hour. I paced quicker as the room’s walls began to peel away on their own and lights began to flicker… I realized it was too late, but pushed the thought from my mind.

"She's there Doctor Jeffreys, she's there taunting me. Always writing in blasted riddles, hides truths. The more I read the closer I feel I get to the answer. But the closer I get the further it seems. The book haunts me, Doctor. I can't get it out of my head."

My eyes flick up to the ceiling as the sickly green paint began to melt, leaving black and rotten boards exposed. The room felt like it was vibrating. Quickly, I looked away... Doctor Jeffreys eyebrows raised a moment.

"Dammit, I think he saw me..." I thought to myself, wringing my hands. "It’s too late, she’s coming…" Again, I try to push the thought from my mind -... got you, under my skin-. My eyes darted around the darkening room, the walls began to scratch her messages into themselves.

"Remember what we talked about yesterday Julia? Have your hallucinations returned? You know we both want you to get better, I can't help you if you don't tell me what’s happening." his voice was condescending, irritating like I was some sort of child. Though dull and fading, as it was again replaced by that oppressive radio static.

"Doctor, there are no hallucinations anymore..." I tried to say it as straight-faced as I could, even with the black-haired, pale-skinned, faceless woman with the elongated arms and legs standing behind him. Her gnarled fingers crept over the head of Jeffreys’ chair. I smirked.

The walls had completely molted, with what looked like faces contorting, twisting, and laughing themselves into the now blackening boards. Mara scrawled crimson Kanji on the wall behind Jeffreys with a slender finger.

Suddenly, the radio static ceased, Spirit in the Sky by Norman Greenbaum faded in. I smiled as a weight lifted from my chest; her message was oh so clear now. I smiled, and my eyes lit up,

"I understand now Doctor, but It’s too late anyway… I'm sorry." I said pointing. Mara’s face cracked showing her crooked and jagged teeth, she nodded slowly as the lights went out...

An Archaeologist and aspiring Doctor, I am a part-time writer from the East Coast of Canada. Written multiple plays, poems, and short stories.

More stories from Nicholas R Yang and writers in Horror and other communities.