by Marco T. about a month ago in fiction
Report Story

And the Sins in the Dark 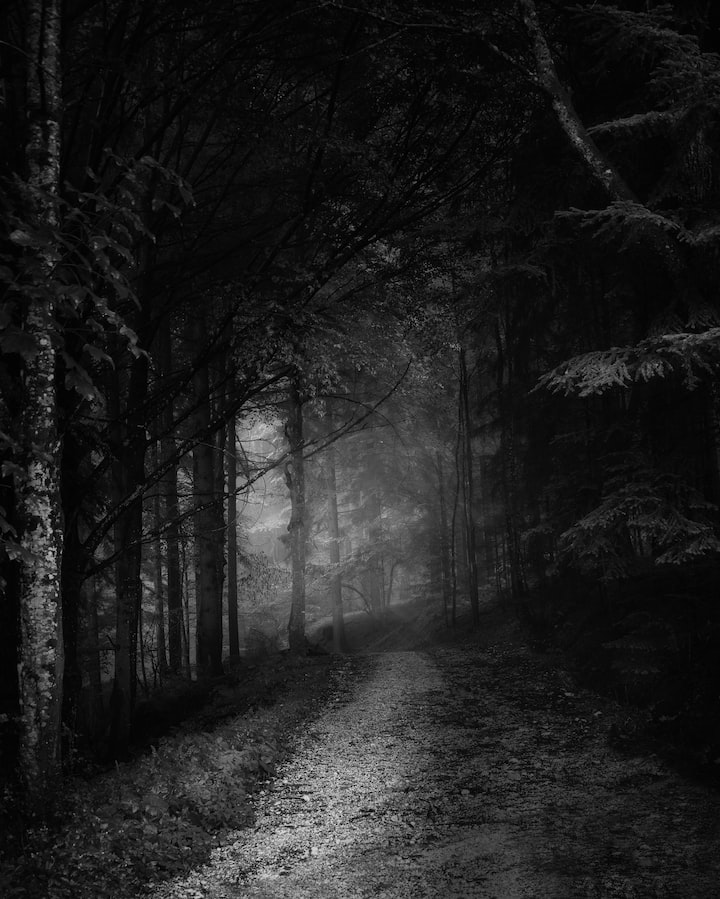 Photo by Simon Berger on Unsplash

The hunter froze, staring at the window. He was supposed to be alone. He checked twice, thrice, thirteen times over, he knew he was alone in those woods. Yet the candle rested on the windowsill, fresh and bright.

Crouching onto the floor, the hunter made his way to the cabin, crossbow in hand. His grip tightened on the handle, his finger above the trigger. With each soft rustle of a leaf underneath his boots, the hunter debated whether to turn on his flashlight. Without it, he couldn't see anyone in the surrounding forest, for the trees shielded the ground from the moonlight. But if he turned his flashlight on, then he could be spotted. Truth be told, he was not supposed to be here. Last thing he needed was for someone to see him.

The hunter reached the cabin, walking around the perimeter while aiming down his sight. He scanned every inch of the perimeter, even checking a loose board that revealed a ditch beneath the cabin. There was no one outside the cabin, no one to see him, to hear him. No one to save him. He moved toward the cabin window, his feet sliding across the wooden porch. He inched into frame, the barrel of his bow darting from one corner of the room to the next. The cabin, like the woods, were devoid of life or disturbance.

The candle flickered, dancing during a windless night. It turned towards the hunter, following him as he moved around the porch. The melted wax flowed over the brim of the candle's top, yet it refused to drip down the wick. The oil clung onto the bring, ignoring the natural in an act of defiance.

The hunter finally stepped into the cabin, the front door croaking. The rotted wood clung to the hunter's fingers, taking five strokes against his jacket to remove. Only cobwebs and the candle greeted the hunter. All furniture rotted away long before the hunter's time, their existence only noted by the wood chippings that dotted the floor. This cabin only existed because the moss outside allowed it to. The hunter approached the candle, his fascination smothering his fear. The candle rested on a brass tray, which glimmered in the soft light. The tray sunk into the decaying frame, it's feathery weight too heavy for the expired home.

The wood on the door hinges gave up, crumbling in seconds. The front door clattered onto the floor, croaking the entire cabin. The hunter swung the other direction, his sights on the doorframe. An army of critters and bugs poured out of the exposed wood, crawling in every direction conceivable. They charged the hunter, turning the floorboards black as they swarmed every nook and cranny of the ground. The hunter jumped around the cabin, stomping on the bugs surrounding him. They began to smother his boots, clinging to his clothes like water in cotton fabric. He refused to scream, for fear of the insect that crawled on his face.

After waiting another minute, the hunter opened his eyes, finding no bugs in sight. He sat up, perplexed by the missing swarm. He found himself alone in the cabin once more, except in the doorway stood an elderly man. The elder's shirt draped over their anorexic back. The elder's jaw hung, his two teeth barely visible as his lower mouth bobbed up and down.

"Who are you?" The hunter said. He stood up, reaching for his crossbow.

"What does that mean?" The hunter lowered his crossbow, too confused to aim.

"I've always been here. I never left. I will stay here when you leave. I will remain until nothing is left to remain. And I return shortly after."

The candle flickered, encasing the cabin in shadow. The elder who stood in the doorway vanished. The woods behind him glowed white, the trees stark black. The room turned darker than black, losing all light. The hunter's vision faded, closing in on the center of his gaze.

The hunter ran out the door, bumping into the walls as his vision faded. He tripped over the rocks of the woods, but continued to sprint. A rumbling rose in volume. As it rose, the hunter realized it was not a rumble; no, it was a voice. Low, yet increasing in intensity. The voice echoed through the woods, yet the hunter felt the voice's breath against his ear. The hunter fell onto the floor, his vision nothing but black. He crawled forward, the voice now talking directly into his ear, repeating the same line:

The light from the candle returned, and the hunter once more stood before the elder. The hunter jumped, his heart racing and his palms drenched in sweat.

"What just happened?" The hunter asked.

"Whatever do you mean?" The elder's jaw returned to a natural state. The elder looked younger, filled with more life than he had a mere five seconds ago.

"Everything. Literally all of time occurs within a single second. You have lived and you will die before the hands of the clock flicker. All of humanity will live and die within the span of a blink."

"Stop being vague and answer me! Who are you? Why are you here?"

The elder remained silent, still as stone. A spider crawled out of the gaps in the floor and inched up the elder's leg. The candle flickered once more, seemingly twice as long as the previous incident. A single red orb replaced the elder, glowing softly. The orb vibrated violently, inching closer to the hunter. The chirping of insects echoed as a symphony within the wooden walls. His hairs stood on ends, as the sensation of bugs crawled all over his arms. He tried to brush his arms, but only made contact with a course, slimy substance that refused to budge. The red orb split in two, these orbs vibrating even faster than the last. It burned to stare into them, but the hunter couldn't look away. The chirping grew louder as the orbs closed the distance. Heat radiated from the orbs, cooking the hunter's face. They closed their eyes and turned away, whimpering silently.

The flame of the candle returned. The elder was back, nonchalant in composure.

The hunter raised his crowbar and shot the elder. The old man fell back, softly thudding onto the wooden porch. The hunter ran outside, but tripped upon exiting the cabin. An object clamped on his leg, digging into his skin. He turned back, the elderly man standing over him. The elder dragged him back into the cabin despite his best efforts to flail on the floor. The hunter couldn't help but scream, though he heard no noise.

"You have sinned once more," the elder said, standing over the hunter. His jaw drooped, disconnected from his skull and hanging freely.

"Get away from me!" The hunter crawled back, bumping into the corner of the cabin.

"I told you, you cannot change what will happen, for the future is set in stone."

"What do you want from me?"

The elder stared at the hunter, his unhinged jaw easing its way onto the floor. He continued to glare, his black irises expanding.

"I know your secrets, I know your lies. I know the reason you walk in these woods. You thought you could hide, but I will not allow you to frolic in the shadows."

"I don't know what you're talking about. Please, let me go home."

"Don't lie to me!" The elder's voice boomed, forcing the hunter to cover their ears. "They cannot return home, and neither can you. This forest is fertilized with your sins, and I won't allow it any further! You have desecrated this sacred land, you have tainted the earth with your existence."

"Tell that to the dirt, for that is where your crimes remain." As the elder walked toward the windowsill, the broken door rose, connecting back to its hinges before slamming shut. Insects crawled out of every opening, infesting every inch of the floor and walls, walking over each other and balling up from overpopulation. The hunter tried to reach for his rifle, but found he couldn't move his arm. He looked toward his elbow, where the substance from earlier pinned his arm down. It expanded, inching up his bicep and hissing.

The elder held the candle in his hand, it's light a small red orb. The room drained of color, with the exception of that red orb. The elder grinned, his eyes pure black. "May the earth forget your flesh, and may your confession remain for eternity." He blew out the candle, encasing the cabin and the woods in pure blackness.

Law enforcement reached the cabin the next day, as an anonymous source claimed to have heard screaming in the night. Inside the cabin rested a skeleton, dressed in hunting attire and armed with a crossbow. The police searched the area looking for signs of a killer, but came across a more startling discovery.

Within the cabin porch they located a loose board. With the board removed, they police discovered a mass grave. Skeletons of varying sizes and fractures littered the ditch underneath the cabin. Though they were vastly different, each skeleton shared two commonalities: each skeleton's skull was punctured with an arrow. And each skeleton held a tree sapling within their ribcage.

The identity of each skeleton was uncovered, revealing that each one belonged to a missing person from all across the state. Officers deduced that the skeletons were victims belonging to the hunter, a member of the nearby town who lived in the region since birth. As for the hunter's killer, no one could figure out the culprit or how they decayed his corpse so quickly.

Months later the cabin was removed, the skeletons returned to their next of kin and the saplings planted in a small clearing. All that remained of the cabin was a single candle, its silent flame a soft, red glow.

More stories from Marco T. and writers in Horror and other communities.