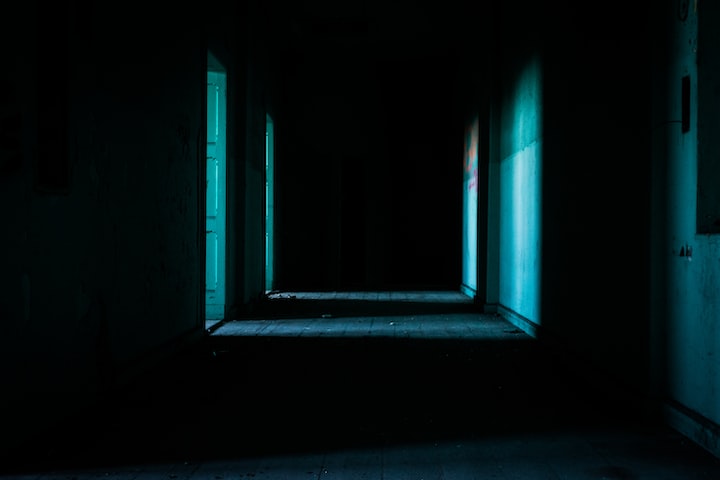 “So, what brings you here today?”

The middle-aged blonde woman sitting across from me leaned forward, crossing her legs. Her hair was tied up in a perfect bun. Round spectacles sat on the bridge of her nose.

“As you know from our previous sessions, my father passed away recently…”

“Yes, I recall; might I inquire as to how you’ve been dealing with the loss?”

“I’ve been coping quite well, thank you, but that’s not what I’ve come to speak with you about today.”

She raised one eyebrow, only by a fraction.

“I understand that you might find this a bit peculiar, but I’m afraid I don’t know what else to do.”

“I can assure you very little surprises me these days, Sam. You can tell me anything and we can work through it together.”

She smiled reassuringly. I looked at her, and wondered if this was the last time she would look at me as if I were not gone mad.

I sighed, and continued.

“You see, my father - he left me his house. This was the house I spent my childhood in, before my parents separated. But I cannot bear to spend a night in it.”

“Can you elaborate on that?”

“Well… When I was a child, I had this feeling, ever since I could remember...this feeling of something... lurking…”

She repeated the gesture of the slightly raised eyebrow, uncrossed her legs and crossed them again in an effort to get comfortable.

“I don’t quite understand what you mean by lurking?”

“I can’t really explain it, either. It was this feeling, this uncomfortable feeling deep inside as if something or someone was watching me.

As if, left alone too long, whatever it was would consume me. "

She watched me speak, her expression unchanging.

"I could not be left alone at night. I slept on the floor of my parents' room until my mother left and took me with her. I feared showering while home alone, as if when I opened the door - it would be there.”

As I spoke, she began writing hurriedly in her notebook.

“It’s funny, it’s been nearly twenty years since I laid a foot in that house, and still, upon re-entering, I feel it...that sense of…”

Lurking. The eyes. How many were there, if there were any? Did it even have eyes? I did not want to know the answer to that question. My skin crawled, or perhaps it was running its fingers down my spine. I shivered at the thought of it having fingers.

She was looking at me.

“You just trailed off there...what were you saying?”

“Well, I don’t want to jump the gun on a diagnosis, and you’ve given me very little to work with so far, but from what you have said, I gather you may be suffering from childhood trauma; this is something I see in a lot of my patients…

I couldn’t even remember her name, although that was nothing out of the ordinary. I was terrible at names. And besides, my regular Tuesday night, Sharon (At least I think that was her name) Moved to Fridays, so I was landed with blonde bun and glasses. Maybe next time I’ll ask again.

“If you want, we could try some hypnotherapy to try and get to the root of your feelings”

“That would be great, thanks.”

I drove there, after my session. I don’t remember why; I was driving home one minute, and then the next I was outside. I don’t even remember getting out of my car. I looked up at my father’s house. It hadn’t been painted in over a decade, and the windows were filthy. This was the first time I really got to have a good look at it. Of course, I was in and out with the lawyers and the relatives, but I never did get to just...look at it. Maybe it was because I didn’t want to.

I couldn’t see inside any of the windows, but I felt like something was there… just behind the glass…

The garden was overgrown, and the ivy was quickly making its way up the walls of the house. I reminded myself that I must get a gardener in before I start sales proceedings. I was, of course, going to sell this house.

It was no good to me, after all. What use is a house one can’t sleep in peacefully?

Not knowing why, I started walking towards the front door. It was a wooden door, originally painted blue, but it was so chipped from years of not being looked after that you could barely tell it was blue at all. Rust dripped from the hinges and the letterbox like blood against what remained of the blue paint. I took out my keys and fumbled for the right one. I slid it inside the keyhole, and it turned smoothly, without protest.

I thought I remembered the real estate agent saying they had issues with the lock.

I took a step inside, and the floorboards creaked under my feet. They were old; even when I was a child. That was what my mother used to say.

“Don’t be afraid of the creaking floorboards...they’re ancient things! They whine and moan for no reason at all”.

I went into the living room. Most of the paperwork and legal proceedings had been done in the kitchen, and this was my first time being in this room in many years. It felt cold. Colder than it did outside. But this was October, and nobody was paying to heat an empty house.

I looked at the pictures on the mantle. There weren’t any of my mother. The empty fireplace let out a low whistle. I jumped back, and my heart began to pound. I knew, of course, that this was a result of the wind howling past the entrance of the chimney. This was nothing to be afraid of. That is what my mother used to say.

I went upstairs, into my childhood room, where I rarely spent time. It was neat, but empty. It remained untouched since the day we left. It looked lonely. But the bed...it looked warm, and welcoming. I sat on its edge, and ran my fingers across the sherpa throw as I looked out the window. The sun was setting early, it’s last light bleeding through the trees.

I don’t remember climbing into the bed…

Or taking my shoes off…

There you are… I have waited…

The voice inside my head echoed. It was unfamiliar and chilling. It poked at my thoughts, probing, reaching…

I shot up out of my bed. Everything was wet. My hand slapped the sheets and came up to my nose. It was only sweat.

I could feel the adrenaline coursing through my veins. I sat in silence for a few moments.

I shook my head and ran a hand through my wet hair. I felt an odd sensation travel through my body. I started to shake...

Laughter racked throughout my body.

I checked the clock on the night stand. It blinked half eleven at me in red, and the scene outside of the window was pitch black. I slid my hand under the shade of the lamp to flick it on, but no light came on. I sighed and peeled the duvet off of myself. I got up and tried the main light switch.

Again, there was no light. I shook my head, rubbing my eyelids in an attempt to force the sleep out.

I went over to my desk and rooted around in the drawers. I found the rose-scented candle that came as part of a Christmas bath bomb gift set, that my mother insisted I not light on my own, a warning she always followed by multiple cautionary tales of house fires. It took me another few minutes to find the box of matches I had stolen from the kitchen and hidden in another drawer. It took me a few attempts to strike one in the dark, but I got there in the end.

I lit the candle and walked it over to my window.

I sat it on my windowsill and looked outside. I could see my car, where I had left it. The trees were bowing in the wind, and I watched as the leaves were ripped from the branches.

My eyes looked back at me from my reflection in the glass, which now became more like a mirror. I didn’t look like myself. I looked tired, and there was a glint of something there...was it fear? I leaned in closer, and pressed a hand against the cool glass, and closed my eyes. I felt a chill run up my spine, like a cold finger. My eyes fluttered open and my body froze.

And it had fingers.

More stories from Anie Homan and writers in Horror and other communities.