by Verity Lee 5 months ago in urban legend

The elections are coming up 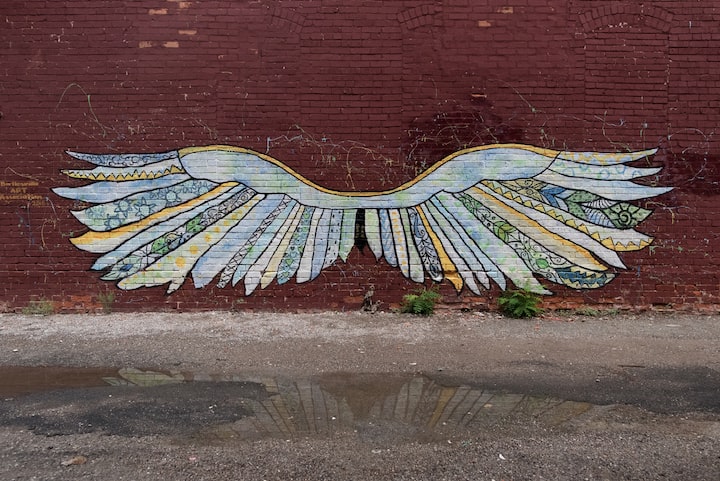 Photo by Josh Howard on Unsplash

I know that my readers are of inquiring minds, and I would not have it any other way. But I need you to understand: the specifics are not important. It’s not about where it happened, or when, or even the name of the Old Man. The wings were the first sign, but they are far from the last.

It started when the Old Man died. In a country most often described as “orderly”, offices shut for a day so people could pay their last respects at the Supreme Court, where the Old Man had spent most of his early working life. The ambulance service was put on high alert because so many people were collapsing in the noon heat.

But really it started at one of the designated graffiti walls. Someone had produced a likeness of the Old Man, and it was good, even if the artist was on a government grant. In this mural, he stood hands clasped behind his back, wearing the grey blazer that followed him into senescence. His painted eyes seemed to retain a stubborn spark, before the stroke and cancer and pneumonia forced him to slow down, to be a sick man.

A few days later, someone added a pair of wings. Big, white angel wings, spanning almost the whole length of the wall.

For those who couldn’t get to the Supreme Court, or for those who wanted to do something more, there was the wall. Instagram pilgrimages, they were coined, but that doesn’t fully reflect the giddiness, the rush of affection, that people reported feeling upon seeing the mural in its full glory.

Biopics ran for weeks in major newspapers. Common themes: his tough hand on crime, his fair-mindedness. He didn’t care about your skin colour, accent, gender, as long as you could get the job done, they said.

They said he pushed himself as hard as he pushed his ministers and government officials. He left the office only after midnight, and started the day at five in the morning. The story was passed around, about the clerk who ended up working 50 hours consecutively during a particularly tense regional summit: she collapsed, and he personally visited her in hospital.

They said there was no space for freeloaders in his government. They always said it with the unspoken “unlike the current government.” In the special schools he pioneered, high-performing kids were identified when they were six, and pushed to their physical and mental limit - and with results: they topped worldwide competitions, entered the world’s top universities, formed the ranks of an academically accomplished government.

People also started seeing things. I looked through whispers shared on Facebook walls, in comments pages. Look past all the conspiracy theories, the paranoia and idol worship: there are a surprising number of accounts of… sightings.

A few stand out for their naturalistic level of detail. Army recruits heard a familiar voice at night, the exact words blurred by distance and night-time noises, but its cadence uncannily familiar from countless television broadcasts. A cleaner who had worked in Parliament for half a century reported seeing that blazer-clad back, just walking out of sight. On the seven o’clock news, she swore that she would never mistake that profile for anyone else, then she showed her unshakeable proof: a pearlescent feather.

One may discount the broadcasting error that put a recording of the old man’s most famous speech in the middle of the evening news. This was the speech in which he envisioned a society built on the foundations of meritocracy, where people would be judged solely on the basis of their ability to contribute to the rest of society. Just over a minute later, the news segment on subsidies for arts university courses continued without any further comment. No one ever found the culprit.

One may discount the mysterious, sudden illness of the opposition leader, the old man’s greatest rival (because the old man didn’t merely have opposition; he had nemeses). Good timing, too, since the illness made him literally unfit to run for election. In a culture where "political strongman" was taken literally, such an invisible debilitation was not well-received.

One would, however, be unwise to discount the debates. If the country would be ready for a minority leader - so soon after the Old Man’s death. If the poor were just benefiting off the hard work of others. If the country - with its award-winning ports, its gleaming hospitals - should take in wooden boats full of desperate people. Turns out that statue of an angel, facing the horizon, arms and wings outstretched, was not to greet the weary huddled masses, but to guard the country from them.

The Old Man was not evil, as we conventionally understand evil. Those wings just gave shelter to a crowd of nastiness that borrowed his voice, his face and his words to justify their policies, their charities, their invective. For how could anyone speak ill of the dead, especially some as esteemed as the Old Man?

Most of the time I am a medical student, Christian and maker/player of interactive fiction.

See all posts by Verity Lee →