by Tara C. 10 months ago in fiction 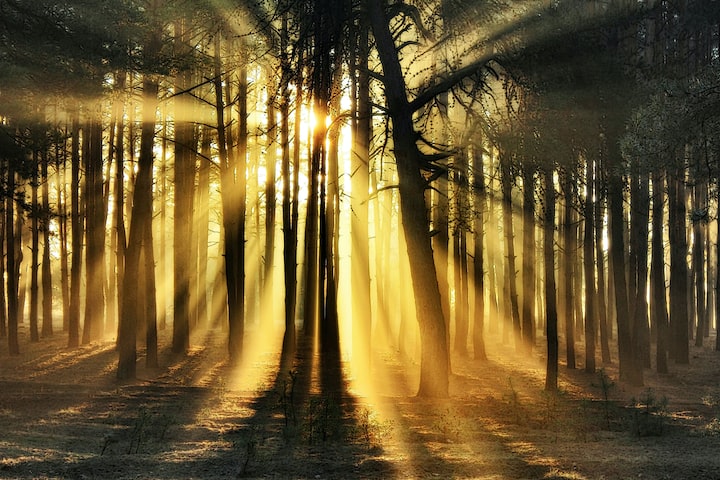 Photo by Valeriy Andrushko on Unsplash

Fire and smoke filled the air as the buildings that once inhabited a small town fell to their own demise. Screams could be heard from miles away, and frantic hoofbeats were heard going far, far away from the town that once was. Nearby on a cliff, a woman sat near the edge with her knees to her chest and her head facing straight forward watching the terror that unfolded. Her green eyes were so still one might have thought she was a statue. Her curly dark brown hair waved back and forth as if it were saying goodbye to all that was. Try as she might, she couldn’t leave this spot even if she wanted. Frozen and numb she sat there for hours until the last flame was suffocated, and the last bit of night touched the sky. Once she realized there was nothing to go back to, she stood to her feet and walked away.

“Leila, time to wake up, we need to be at the funeral in an hour!” yelled a shrill voice from the kitchen. Leila peeked her head from her covers and sighed very loudly as she tried to make her body move. Waking up had become an exceedingly difficult task over the past year but today especially she wanted to stay asleep and avoid the events of this day in particular. Her dreams this past year had been odd, magical, and almost prophetic. She couldn’t explain why this was but she didn’t dare tell anyone. A guilty thought passed as she felt she should have warned her father of one dream in particular. Her father died exactly one year after her mother and both by mysterious circumstances. Maybe she could have stopped what occurred that fateful night. “Leila! Get moving!” the same shrill voice yelled. “Alright, I am getting up. Stop yelling”. Leila retorted. The shrill voice was Leila’s close friend who only meant well. They continued to remain close over the years and even bypassed their awkward teen years that can be the death of many friendships.

Leila dressed in a simple black dress that seemed to cloak any curves she had and started to tackle the mess of curls on her head. She wanted to look presentable to say her final farewell to her father. As she looked for a pair of earrings, she decided to look in her parents’ room to see if she could find one of her mothers. Her mother’s things had stayed in the same place this past year as her father didn’t have the heart to move any of it. As Leila entered the room that her parents once shared, she heard something that brought a chill to her spine. The drawer. She knew this was not her friend. “What drawer?” Leila said aloud to no one in particular. Leila went to open the top drawer and started to sift through the beautiful pieces her mother once owned. As Leila looked for a nice pair to wear, her hand stopped when she felt something solid. Leila pulled out a little black notebook that had been covered by her mother’s jewelry. She wondered how long this had been in there as she never saw her mother holding or using this. When Leila opened the notebook, she saw some journal entries from her mother which of course piqued her interest. “Leila hun, we need to get going here in a minute. It won’t look right if his own daughter isn’t one of the first ones there”. A voice came from the door. I know Marie, I will be out in just a moment”. Leila whispered back. Leila put the notebook back and grabbed a pair of white gold earrings with pearls at the end. The notebook could be read later.

Leila stayed behind as many left the cemetery. The funeral was well thought out and many came to speak of the good things her father accomplished. Leila didn’t speak however, as she was still waiting for her father to still wake up somehow and not until he was lowered to the ground did reality hit that he was never coming back. Leila stayed by her father’s grave and sat there for a long time not saying anything. The sky started to darken as the clouds began to fill every inch of space up above. A cold wind came through at this moment Leila felt a cold chill creep up her back. The sun was almost down, and she would need to take shelter soon. Leila felt a hand grab her and instantly she knew Marie was there silently allowing her to grieve. Secretly she knew Marie was screaming in her head that it was time to get inside but today she kept those thoughts to herself. Leila knew they needed to get home and she didn’t want to put her friend in danger by keeping her out past sunset. “Ok, let’s go home. You can stay with me tonight as it is far too late for you to make it home in time”. Leila said whispered. Marie smiled and hugged her dear friend and squeezed her tightly. Two friends walked hand in hand down the path that leads to home. As they walk down the street windows began to shut and there was almost an eerie silence throughout the town. As they get to the front door Leila hesitates in the entrance and looks around trying to make sense of the feeling she kept getting. The last bit of sun was disappearing behind the horizon as Leila shut and bolted her door.

“Help me, help me!” a girl screamed as she ran in circles in the cold dark night. Many stood in a circle around her pointing at her only and never looking at her always looking away. “It’s your fault, your fault”. The crowd whispered in unison. “Can no one help me!” the girl continued to scream. Tears streamed down her face as she fell to the ground. A cry so deep one could feel it in their soul and no words came from her mouth as she got on her knees. Her throat burned from screaming for long, and no one was helping her. Strength can only come within and only then will you overcome. One last scream, one last cry. One last time and she will break the sky.

Leila bolted upright, trying to make sense of what she just dreamed. Marie and Leila went to bed fairly late that night and had quite a bit to drink. She likely didn’t sleep for very long as she was too disturbed by her dream. What did it all mean? What could she do to move on? Leila started to make some coffee when she heard a knock on her door. Marie who started down the hallway yawning mumbled “I’ll get it, make me a cup please”. Leila nodded and proceeded to make the pot. “Ummm...Leila you have a visitor...yeah...it’s a lawyer”. Marie stated with a raised eyebrow. Leila turned her head confused as to why a lawyer would come to visit her especially as early as it was. She thought her and Marie were the only two awake at this hour. An older man appeared in the living room wearing a formal business suit holding a briefcase. He nodded his head at Leila and removed his hat. “I am sorry to intrude miss, but this matter is urgent regarding your father’s will. I don’t want to get stuck here for another night and I have a longer journey to get back home”. Leila gasped “My father had a will”? “Why yes miss, he talked about you frequently and recently updated as it were. Very strange how he passed”. Leila looked down at the floor “Yes indeed”. He cleared his throat “Well, if you don’t mind why don’t we get started”? Leila gestured towards the couch and brought he mug with her to hear what exactly her father put in his will. The man opened his briefcase and brought out a packet of sorts and started to read, “Let it be known that in my death I leave my daughter Leila my estate and all that remains in my savings. As of this day September 30, your father has $20,000.00 in his savings miss”. Leila started to cry as there was a certain finality to this statement. All that he had left he had given to his only daughter. There would be no more trips to the bank from her father, and no more footsteps in the house. Marie hugged her friend and thanked the man for being so kind and stopping by. After all the paperwork was signed and handed over, they said their farewells and the man was gone just as quickly as he appeared. “That was definitely unexpected” Leila said to Marie. “Well at least you have enough to float for a while. I know you would rather have the person but it’s a start Leila. I mean you will have time to grieve and move forward” Marie said optimistically. Leila smiled as she knew her friend meant well.

“It really is weird though, I found something in my mother’s drawer yesterday and now this” Leila said aloud. “I mean I don’t think that is weird, your mother and father had some secrets for sure but its not odd to have a diary or a living will. Did you ever finish reading what she wrote?” “No, I didn’t have the courage to read on. I am almost afraid to”. Leila whispered. Marie left after awhile and Leila was left to her own devices. Leila decided to pull the black notebook out and finish reading what her mother wrote. As Leila read about the weird creatures that only come out at night and feast on anyone caught within its line of site. She found that her mother had figured out a way to get rid of these creatures for good! “That is what happened! My mother figured it out and they killed her. My father must have found this as well and so they killed him too!” The creatures that plagued her town for so long, the reason no one could leave at night. Her mother and father figured this out but could never put this plan into action. Leila would get it right this time. She would need the help with all that lived in this town. She would have to gain their trust in order to pull this off.

Leila stood on the cliff looking down at the town that once was. She carried a sack of anything that was of importance to her. The townspeople told her she was crazy to stay and watch. She should have high tailed it out of there like the rest. She couldn’t though because she wasn’t just saying goodbye to her town but to the resting place of her brave mother and father. Leila would be the first person in the history of ever to be praised for burning down her town. At the end it was a town effort as many begrudgingly listened to the crazy girl running around telling everyone she could get rid of the creatures once and for all. How she pulled this off, well that is her secret to tell. Leila smiled as she walked towards the forest and made a different path to a new home. Maybe one day Leila will be brave enough to tell us the rest of her story.

Receive stories by Tara C. in your feed
Tara C.
Read next: The Garden