by Tewahway 2 months ago in urban legend
Report Story 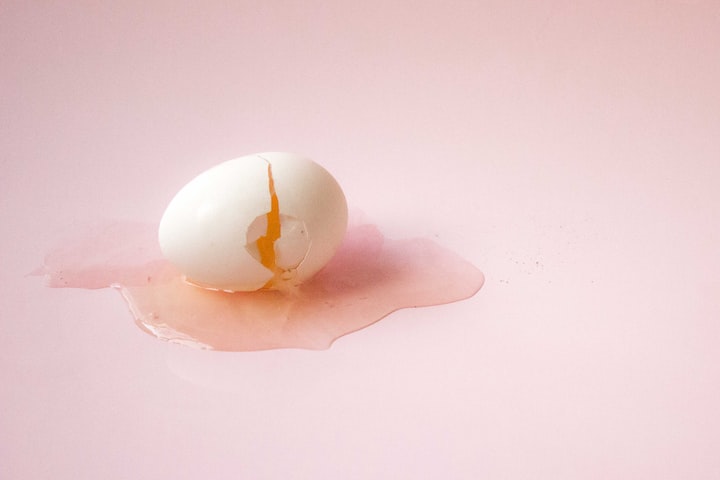 Photo by Melani Sosa on Unsplash

The following is the collection of transcribed audio logs from the phone of Caleb Watts, a 24 year old student and restaurant worker in North York. All other audio logs recorded by Caleb have been excluded due to irrelevancy.

I've never been one to write in a journal, or log anything, but this is absolutely nuts...

There's no amount of times I can say it to make it normal. It's absolutely ludicrous, and frankly, it was damn painful. I'm a mammal, for Christ's sake! A god damned human being! Not to mention, a man!

I suppose I have every reason to be freaking out; I laid an egg.

Well, it's fucking possible, because I have the egg with me now. I'm not making it up, my ass still hurts. I thought about seeing a doctor on whether or not I'll need stitches! And crazy..? Well shit. Probably.

Honestly, when my stomach began to swell and gurgle, I was certain it was the gas station sushi I'd eaten earlier. But unless whatever caused me to grow this thing inside me, before laying it, was hidden in the nastiest spicy salmon rolls on Earth, I have no idea where it came from.

So, anyway, I've been keeping the egg with me everywhere I go. Don't say it's some “maternal instinct” because that's dumb as hell. I'm a man; I don't even have kids. I just don't want something to happen to it. And yeah, of course I want to be there when it hatches. Who wouldn't want to see that?

The egg is kinda funny looking, though. A little bigger than a chicken's egg. Maybe about the size of a duck's... all I know for sure, is that I felt every millimeter of it, when it came out.

The egg's shell is exactly the same colour as my skin tone (I'm a white dude, not super pale, but not tanned either). It's got a strange texture. It feels softish, but a bit prickly. It wasn't prickly when I laid it though, thank god.

The only person who I've told about it, is my best friend Huw. Big mistake though, he's a dick. Sure he believes me, but that just makes it worse. He can't even look at me without laughing any more.

I've had the egg for about a week now.

I think it's been growing, the colour is changing a bit too.

At first I always tried to keep it warm and swaddled, in a small tea towel. It's a bit too big for that now. It's also warm to the touch. I'm kind of concerned about overheating it, so I just try to keep the temperature consistent in my apartment.

It moved for the first time today. I felt so weird when it happened. At first, I was proud. Like no pride I've ever known before. Maybe something like what a parent feels, but I'm not sure.

Once I recognized the way I was feeling, I got kinda scared though. What the hell do I do when it hatches? If it hatches.

I can't afford to raise a child. I don't even know what the hell it's going to look like. Maybe it will look like me?

I’m starting to think that maybe I should see my doctor, and take the egg with me. I’ll give him a call tomorrow.

No way in hell am I letting that quack of a doctor touch my baby!

Wait, what the hell am I saying, “baby”? Jeeze, I sound like an overbearing mother.

My doctor referred me to a specialist. I thought for sure it was going to be some kinda psychiatrist. He said he was from the BTI, but just shrugged it off when I asked what that meant.

I told the doc about what happened first. He seemed like he was choking back laughter, yeah, I get it. It’s fuckin’ hilarious. When I showed him the egg, his attitude took a real 180.

He kept trying to persuade me to leave the egg with him, so he could have a friend of his study it. “Not bloody likely!” I told him. I couldn’t help but notice a kind of evil look in his eye. He definitely has something malicious in mind. He even had the gall to tell me after I showed him the egg, that I was showing signs of some kind of attachment issue, that I’m overreacting. Well yeah, no shit, he didn't lay the damn thing.

I don’t trust him. I ain’t going back.

I haven’t been able to eat properly for a few days. The only stuff I can stomach is oatmeal, corn, and seeds. Everything else either goes right through me, or makes me puke.

The egg’s doing well though.

I was alarmed when I noticed a large vein near the surface of it. For some reason, I know it’s doing okay though. The little prickles have turned into full on hairs. It looks like a cheap, campy D list horror prop. Something straight outta Critters, or some other garbage movie. I shouldn’t say that though, it’s much more handsome than those nasty beasts.

Huw won’t come over anymore. He said it’s just too weird now, and that I "obsess over the egg". He said I'm making it all up, since I won't show it to him anymore. Honestly, I get the feeling that he’s plotting something. Maybe the doctor got to him, convinced him to steal the egg from me. He’s probably being paid to do it! So much for our friendship. I’m better off without thieves and kidnappers in my life anyways!

It’s kinda hard to think straight lately. My mind is always foggy. Thank god I’ve got Eggy with me for comfort. I named him Eggy when I knew that he was a boy for sure. I don’t really know how I know, but I do.

Eggy can move now, he can kinda roll a bit. He has strange little lumpy growths sticking out in different spots. I think they’re going to become arms and legs or something. Hard to tell though, as it seems he sprouts more every time I check. He’s growing up so fast!

Sometimes, when he thinks I’m asleep, I can see him exuding some sort of cloud. It’s really cute. It smells nice too, so I like to breathe it in.

He sprouted some weird looking limbs. He was really hungry, but I didn’t know what to feed him. I feel really light headed now, I think I’ve lost a lot of blood. I feel like such a bad parent. What if he’s still hungry? I have more for him, if he just comes home.

I need him to come back soon. I miss him. I think I’m just going to rest for a little bit, until he gets back.

On September 25th, 2020, the corpse of Caleb Watts was found excessively mutilated in his apartment. It appeared as though he had been deceased for some time. It also seemed that pests (yet to be determined) had been feeding on the body.

It is believed that he may have been repeatedly exposed to powerful psychoactive compounds, though no traces of such were found present in the toxicology screening of the remains.

Friends and family have stated that in the month leading up to his death, he had begun to act very belligerent and withdrawn. No one had reported him missing as anyone who would have been in regular contact was not on good terms with him, at the time.

One friend of the deceased, Hubert Brunning, provided a small insight on Caleb’s mental state during the month. He stated that Caleb had become increasingly paranoid, and was “...obsessed with some egg...”

No evidence of the egg's existence has been found, to date.

More stories from Tewahway and writers in Horror and other communities.